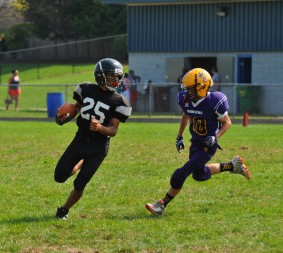 Blazer Isau Gonzales turns the corner on Quentin Nellist on his way to the endzone.

Two teams stepped onto Bob Otolski Field Sunday, Sept. 25, in search of an Inter-City Catholic League victory and a leg up heading into the final weeks of the 2016 season.

The Mishawaka Catholic Saints had come off of a tough loss and needed to find some success against their opponents. The Blazers of St. Matthew were looking to take an unblemished record into the grinder that remained on their schedule.

The Saints opened the game off with a nice mix of runs by back Zack Bryan and a pass from Quentin Nellist to Bryan, all stopped by Blazer Linebacker Isau Gonzalez.

The fourth play of the drive would be disastrous, as Blazer Bryce Martens stripped the ball carrier and with one motion and darted 55 yards untouched for a touchdown making the score 6-0.

The Saints offense again peppered the field with runs and by Bryan and Xander Marien and a nifty screen pass, chewing up yardage and controlling the game, but a costly penalty and a Gonzalez tackle for a loss quickly took the wind out of their sails.

The Blazers would finally get their first offensive possession with a minute in the second quarter and could muster a mere nine yards on four downs as the Saint defense was up to the challenge stopping the potent offense.

Then the Gonzalez show took full form as the player recorded his eighth and ninth tackle of the day, both for losses, Then after a Saint punt, on the first play from scrimmage he dashed 59 yards to the end zone making the margin 12-0, Blazers.

The Saints tried to muster a charge but were driven back and turned the ball over on downs leaving just 57.09 seconds between them and intermission.

The Blazers had 37 yards between them and a score with the clock ticking. They made the most of their opportunity when running back Joey Barkowski raced down the sideline with the aid of a huge block from Gonzalez for a 29-yard touchdown jaunt. Martens followed his offensive line for the point after attempt pushing the lead to 19 as the horn sounded.

The Black clad Blazers would start the second half off as the ended the first highlighted by a Gonzalez 46-yard romp courtesy of a straight arm for a touchdown. Blazer Caleb Lusanga plunged into the end zone for another point after.

After the Saints turned the ball over on downs it took the Blazers just one play, a 36-yard streak by Bernard Coutee to score another touchdown making the margin 33-0 with 1:14 left in the third quarter.

The Saints then went on a march using the talents of Blake Oberg, Anthony Marchetti, Dylan Welty, Michael Murphy and Marien to put together a 14-play drive that unfortunately ended in the redzone as time expired.

“We expect that Tony Violi’s teams will play hard for four quarters and the last drive they had showed their resolve,” quipped Blazer coach Ben Domonkos. “Even with the outstanding performance of Isau Gonzalez, this was a team win, our scout team pushes our starters every day at practice and it has shown in their performance.”

“We need to strive for more consistency in all that we do,” replied Violi. “I was some good things from our kids today, but we need the trickle-down effect to happen; from our coaches doing a better job, to our eighth graders working hard and together, then showing the seventh graders leadership.”

In other action, Gavin Stefanek and Asante Anglin scored two touchdowns a piece as the Crusaders of Holy Cross upended Osceola Grace in an exhibition matchup.

The Panthers of St. Anthony remained undefeated as they disposed of the Cardinals of Westside Catholic 46-0. Touchdowns were scored by a company of Panthers; Collin Suth, Luke Thomas, Brandon Prokop, Ethan Fullenkamp, Walter Wesson, Mclaine Pierson and Ethan Benifiel.