St. Joseph Parish, South Bend, worked hard to make the Solemnity of All Saints into a holiday the whole parish could celebrate together, with plenty of learning, praying, and singing sprinkled in.

After the vigil Mass and the usual 7 a.m. Mass, the school Mass at 8:15 a.m. featured fourth graders dressed as saints processing in to a litany invoking every saint they had chosen to portray. Some of those “saints” proclaimed the readings, read the prayers of the faithful, and presented the offertory gifts. During his homily, Father Matt Fase, CSC, asked for a show of hands in response to several questions: the continent where their saint lived, which ones were royalty and which were poor, which were in habits or unusual garb, and which were wearing ordinary everyday clothes. He suggested that 100 years from now, at a Mass like this, someone might be wearing a St. Joseph School uniform to portray one of them. “What stories will they tell about you?” he wondered. 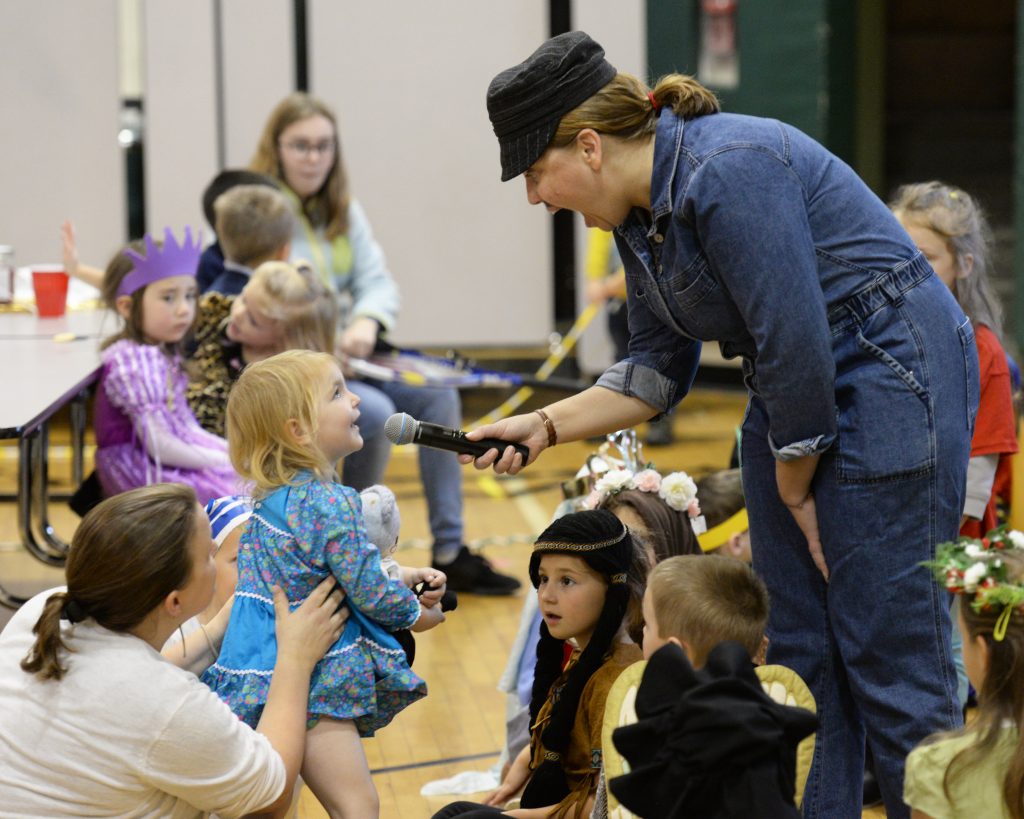 After Mass, the fourth graders formed a “wax museum,” striking still poses until each attendee stood on a small circle on the floor facing one of them. Then the “wax” saint came to life to explain what the important thing about “them” as their chosen saint was, and other facts about that saint’s life and death.

When Halee Williams, who oversees the Catechesis of the Good Shepherd Program, learned on Instagram that Meg Hunter-Kilmer, author of “Pray for Us” and “Saints Around the World”, would be in the area on Nov. 1, she invited Hunter-Kilmer to read to all the students in the preschool. “Miss Meg” came wearing coveralls, holding a wrench and a baby doll. She told the preschoolers she was dressed as Blessed Salvador Huerta Gutierrez, a Mexican auto mechanic, father of 12 children, daily communicant, and martyr of the Cristero War alongside his brother, an opera singer. Then, with a little prompting, she took requests for what sort of saints the children wanted to hear her read about: a princess, a Pokémon fan, a soccer player, a ballerina, someone who struggled with anger all his life. 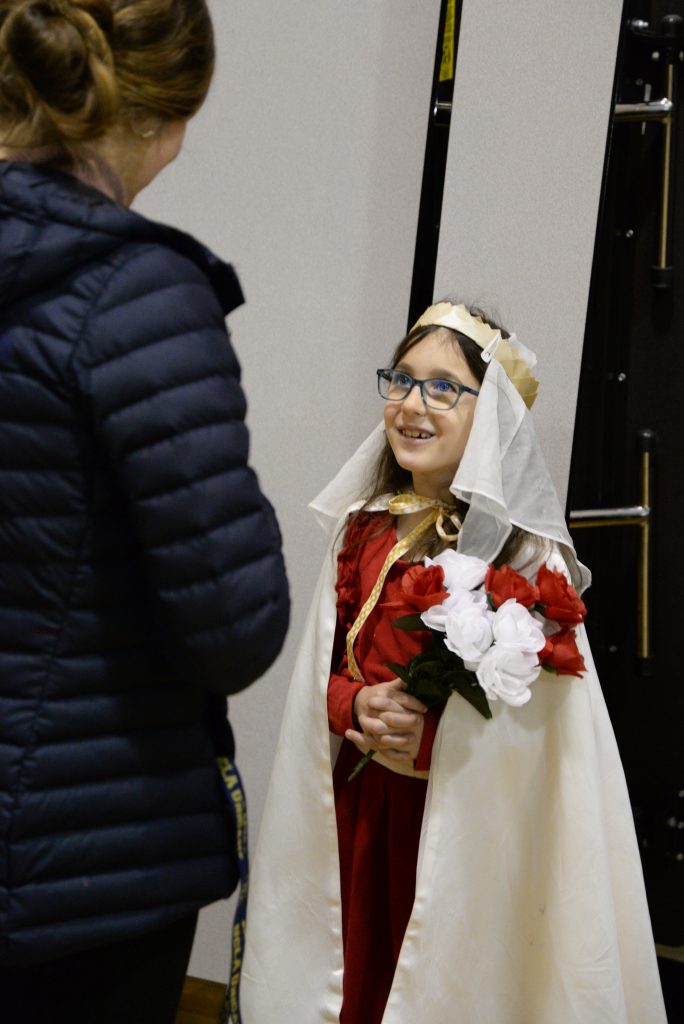 Fourth-grade students at St. Joseph Grade School in South Bend show off their saintly attire at a special event at the parish on Nov. 1, where members came to celebrate All Saints Day and learn about the various saints students chose to dress as for the All Schools Mass.

Throughout the half-hour, Hunter-Kilmer interacted spontaneously with the children. After the reading, she signed a copy of her book for each class, inscribing, “God loves you like crazy. Now go be saints!” She suggested that their teachers use the topical index to find other saints especially relevant to the preschoolers, telling them they could find a saint with almost any trait, but that they’d never find one exactly like themselves. Being that unique saint is up to each of them. “Forever and always, God has been hoping you would be a saint,” she said.

The preschoolers were dismissed to parade through the building and grounds holding cutouts each had decorated to represent a particular saint.

Before the evening Mass, about 30 families gathered for a party in the school, many dressed as saints. Parishioners Mary Liz Kaltenbach and Jennifer Miller had worked hard to make the occasion festive, with the help of four St. Joseph High School students earning service hours. Party food of lemonade, cookies, and popcorn provided sustenance as children visited stations where they could color, create a personal litany of favorite saints, toss rings over saint peg dolls, and play hopscotch on a spider web in honor of St. Felix, who was said to have escaped persecution when a spider wove a thick web over the entrance of a hole in the wall where he and Bishop Maximus were hiding. Attendees could also go on a St. Anthony scavenger hunt that involved guessing the number of symbols in each jar dedicated to a particular saint, such as maple leaf cookies for St. Andre Bessette (a Canadian saint), Pokémon cereal pieces for Blessed Carlo Acutis (who watched Pokémon), and lion animal crackers for St. Jerome (said to have calmly healed a lion’s injured paw). Tables were adorned with note cards made from the illustrations in Hunter-Kilmer’s book. 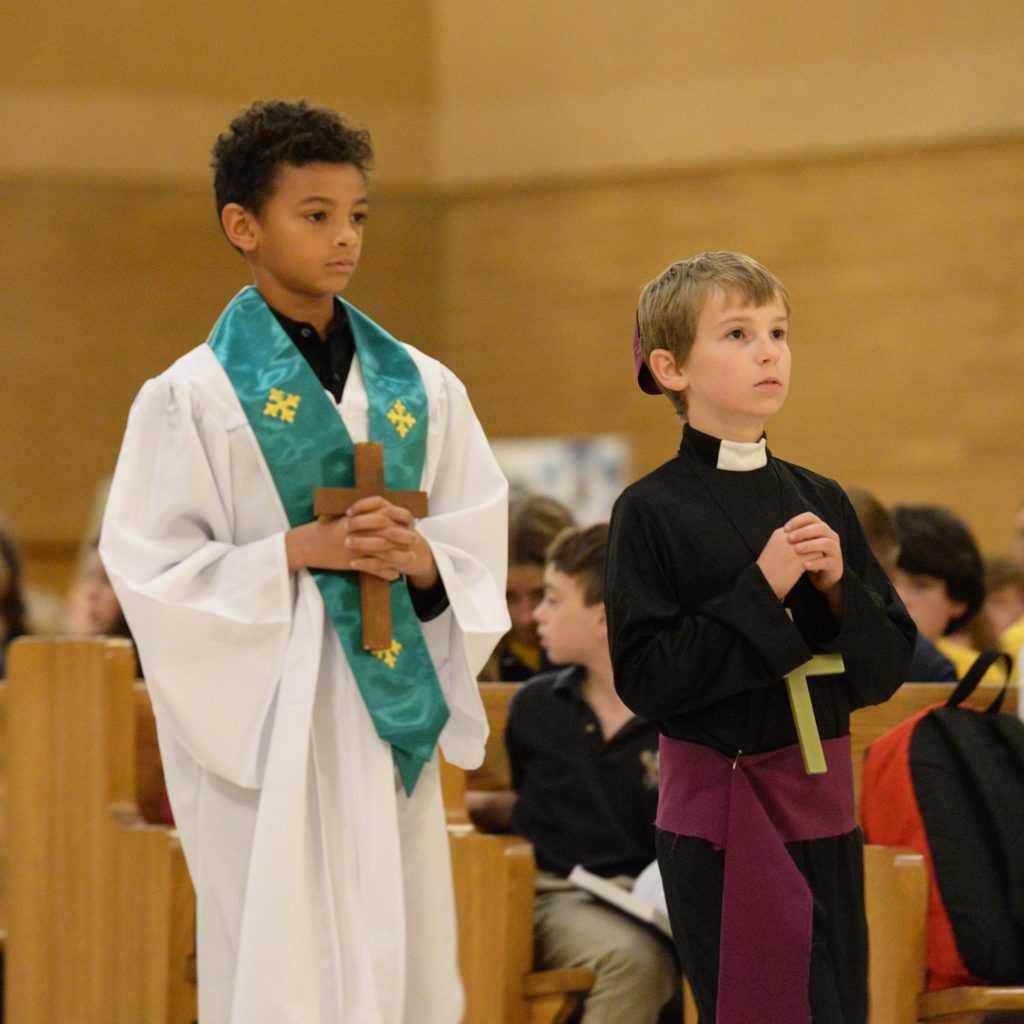 After signing copies of her books, the author called all the young saints to join her and share a sentence or two about the saints they were portraying, each followed by everyone praying, “Pray for us.” Hunter-Kilmer clearly enjoyed celebrating saints who had “big feelings” and connected with aspects of the children’s lives: scouting, athletics, beauty, adventure.

She reflected on the evening, saying that it was lovely. “Mary Liz and Jennifer did such an amazing job pulling together snacks and decorations and crafts and games, and it was such a joy to see the kids in their costumes (and the adults, too)! I was so very grateful to be able to spend the evening delighting in the communion of saints with these families who are hoping to become saints themselves.”