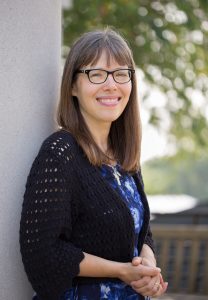 Dawn Eden Goldstein, pictured in an Aug. 9, 2014, photo, turned to the communion of saints for to get through the “spiritually isolating” effects of childhood sexual abuse, as she recounts in her memoir “My Peace I Give You: Healing Sexual Wounds With the Help of the Saints.” (CNS photo/courtesy Dawn Eden Goldstein)

WASHINGTON (CNS) — Dawn Eden Goldstein overcame the “spiritually isolating” effects of childhood sexual abuse via the communion of saints, as she recounts in her unusual memoir “My Peace I Give You: Healing Sexual Wounds With the Help of the Saints.” 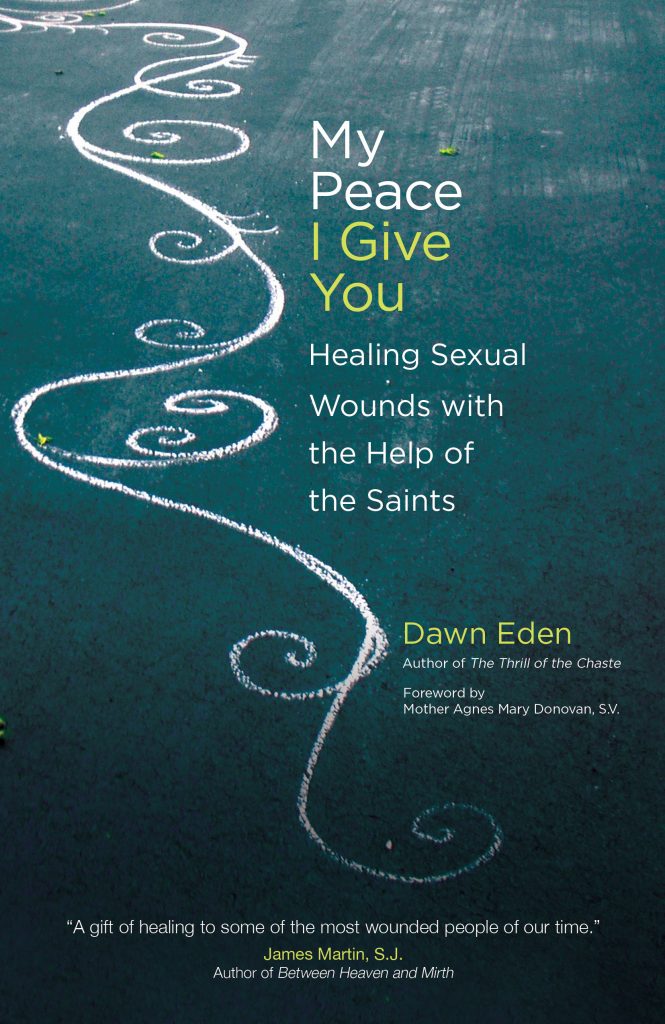 This is the cover of “My Peace I Give You: Healing Sexual Wounds With the Help of the Saints,” a memoir by Dawn Eden Goldstein, a survivor of child sexual abuse. (CNS)

Published by Ave Maria Press in 2012, the book recently was translated into Italian. And Goldstein is a popular lecturer. Raised Jewish, she converted to Catholicism as an adult and was baptized in 1999.

The spirituality of redemptive suffering provides interpretative keys for making terrible experiences opportunities for transformation, explains the author, who was victimized as a kindergartner.

She was abused in the temple’s library, by the temple’s 73-year-old janitor, while her mother and sister attended Shabbat services on Friday nights.

She also lived in a “sexually porous” household that exacerbated early trauma.

Christ, Mary and the saints provide instructive solace when it comes to coping with the terrible things that can mutilate the human psyche: pain, abandonment, emotional neglect, shame, self-hatred.

“The beautiful truth is that even past sufferings, in the light of Christ, take on profound meaning, because they are part of the believer who is united to Jesus in the present moment,” writes the author.

Continuing, “memory does not have to be the enemy. On the contrary, our healing becomes possible when we admit that our memories are an integral part of who we are.”

What makes Goldstein’s account especially authentic is her willingness to unfold the ongoing work of self-understanding, within Catholic theology, by revealing specific moments of trauma’s debilitating return.

While doing graduate work in theology at the Dominican House of Studies, listening to a history lecture, she was overcome by a flashback that triggered an anxiety attack — and the risk of bursting into tears in class.

She went on to become the first woman to be awarded a doctorate in sacred theology from the University of St. Mary of the Lake in Mundelein, Illinois.

The reader accompanies Goldstein as she gets through the class, makes it to the Metro where she fully recalls the offending memory and briefly breaks down, and then makes sense of the trigger.

“If God was truly calling me to study — and I believe he was — then he wanted me to try to absorb what was being taught in class, even if doing so had painful side effects,” she said, resolving that “offered up to God, my symptoms of post-traumatic stress would no longer be purposeless pain. They would be sacrifice.”

Highlighting the lives of saints who experienced abuse or neglect — always showing how the saints find redemptive value in suffering — Goldstein offers new interpretation of, for example, St. Thomas Aquinas’ response to his brother’s attempt to force a prostituted woman on him.

The saint used spiritually therapeutic techniques, relaxing and praying, to cope with a traumatic event. His story, Goldstein writes, underscores how “that which humiliates us can heal us.”

When Goldstein presents her book, people “always” come up to her after to share experiences of sexual abuse.

“They just want to talk to someone who listens,” the theologian told Catholic News Service.

“One woman came up to me after a talk. She had been abused by a priest,” she recounted.

Goldstein said she was aghast.

“I thought, ‘What is going on here?’ Something is very wrong if this person, who said she talked to a bishop and others — lawyers, maybe a victim-assistance person — but no one ever just listened to her and said, ‘I’m sorry. That was wrong. It should never have happened to you.’”

She said she feels the Catholic bishops and the faithful at large need to see the reality of sexual abuse and its victims “through tears, through weeping.”

“Learn to weep,” she advised.

“This is what Pope Francis has said again and again, that we as a Church need to learn to weep,” added Goldstein. “He says there are some realities that can be seen only with eyes cleansed with tears.”