On the Solemnity of All Saints, some holy men and women came out to greet Bishop Kevin C. Rhoades in the form of fourth-grade students at his pastoral visit to St. John the Baptist School in South Bend. Teachers and staff at the school spotlighted the communion of saints in the weeks prior to the bishop’s visit. Each class had adopted a saint to study and decorated their classroom doors in that saint’s honor. At the fall festival the weekend before, Principal Shannon Jones stated how parents voted for the best doors. 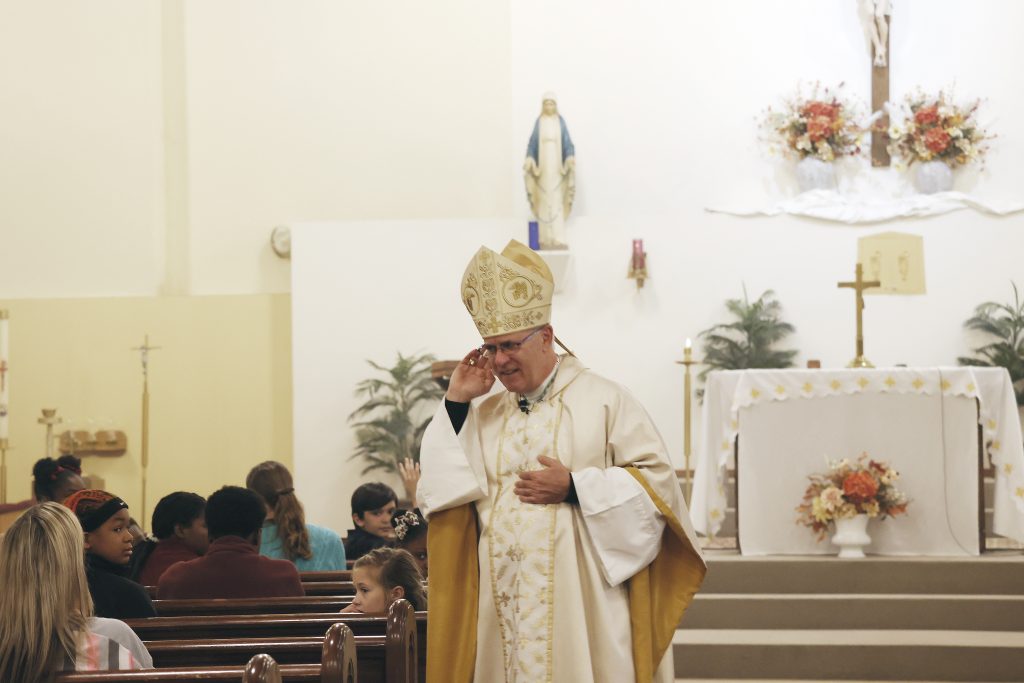 Photos by Jennifer Barton
Bishop Kevin C. Rhoades listens as a student answers a question he posed in his homily at a pastoral visit to St. John the Baptist School in South Bend on Nov. 1. At left: A fourth-grade student tells the bishop about the saint she chose to portray on All Saints Day, St. Kateri Tekakwitha.

Bishop Rhoades began his visit with Mass in the church. He spoke in his homily about the epistle of St. John and how “God loves us so much that He adopts us as children.”

He asked the students if someone could tell him when they became adopted children of God, to which one student answered: “At Baptism.”

He affirmed that answer, saying, “Baptism, the first sacrament, the great sacrament, when the water was poured over us and we were cleansed of original sin, we became daughters and sons of God. That’s how much God loves us.”

He then focused on the saints in heaven, who, as he said, “have won a battle. They overcame sin. They renounced the devil. They were victorious. And that’s why they’re in heaven; they share in Jesus’ victory, because Jesus won the battle. He suffered and died on the cross out of love, He conquered sin, He conquered death, He rose from the dead, and He calls us to share in His victory.”

Then he asked some of the fourth-grade students, seated at the front of the church, which saints they had chosen to dress as for the All Schools Mass. After the first hesitant answers, the students became bolder, raising their hands to share who they were and what they had learned about their saints. 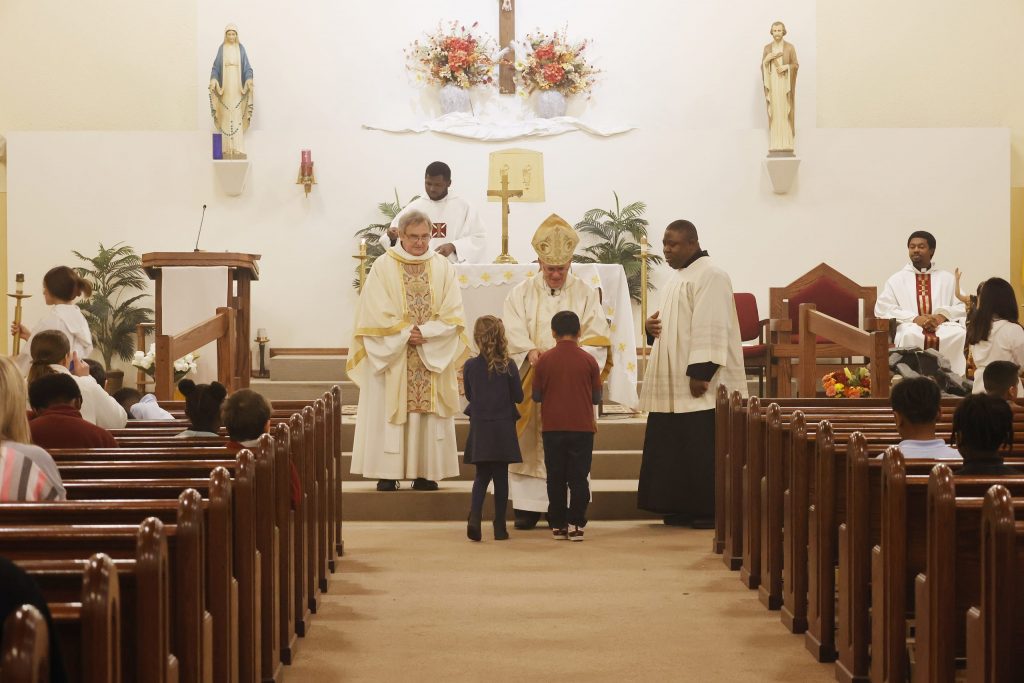 After Mass, Jones, Pastor Father Glenn Kohrman, and Parochial Vicar Father Sunday Akuh led Bishop Rhoades to the classrooms, where many of the scholars therein demonstrated their knowledge of different subjects.

Stopping first in the seventh-grade classroom, Bishop Rhoades asked if the students had any questions for him. One female student seemed very at ease with the bishop and asked him multiple questions, such as whether he liked being a bishop and about the fame that came with the role. He admitted that sometimes he goes to the grocery store “incognito” so that he will not be recognized. 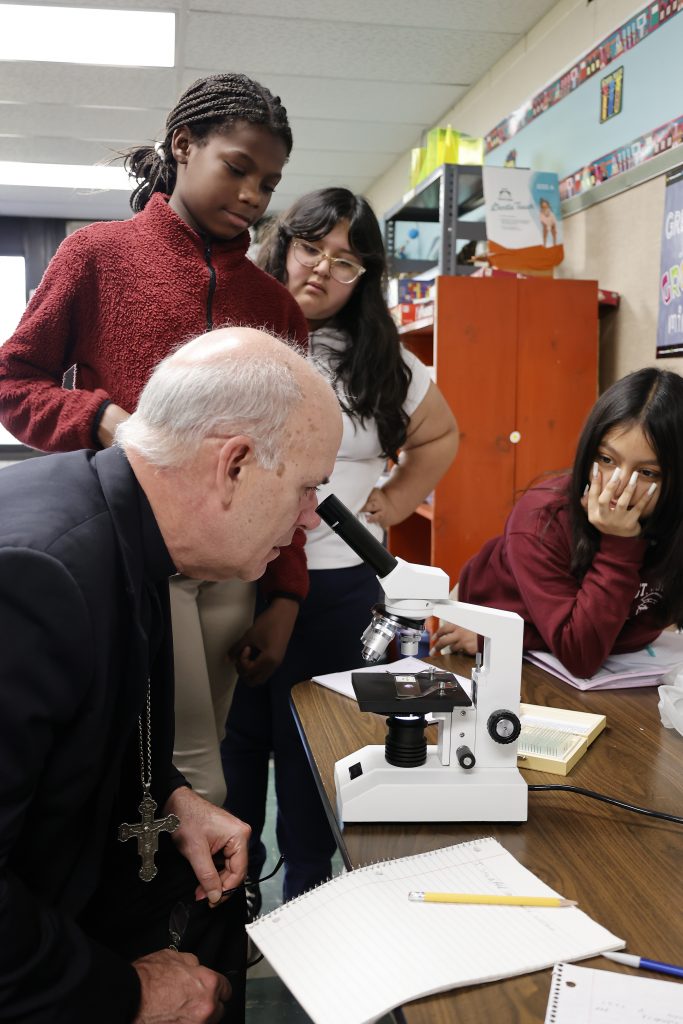 Students look on as Bishop Rhoades attempts to examine a slide in seventh-grade biology class.

In the sixth-grade classroom, students were studying biology when he entered. Here, students interacted with him, helping him use the microscopes to view the slides they were examining. The preschool students in the next class happily greeted Bishop Rhoades and sang the Alphabet Song for him. When he asked them if they were learning about Jesus, they enthusiastically answered in the affirmative. In fifth grade, another female student explained the math problem she had just solved, and he taught them about the three parts of the Church: the Church on earth, in heaven, and in purgatory.

As much as possible throughout his visit, the bishop greeted students with a handshake, asking their names and chatting with them about their school, the Catholic Faith, and other age-appropriate topics. 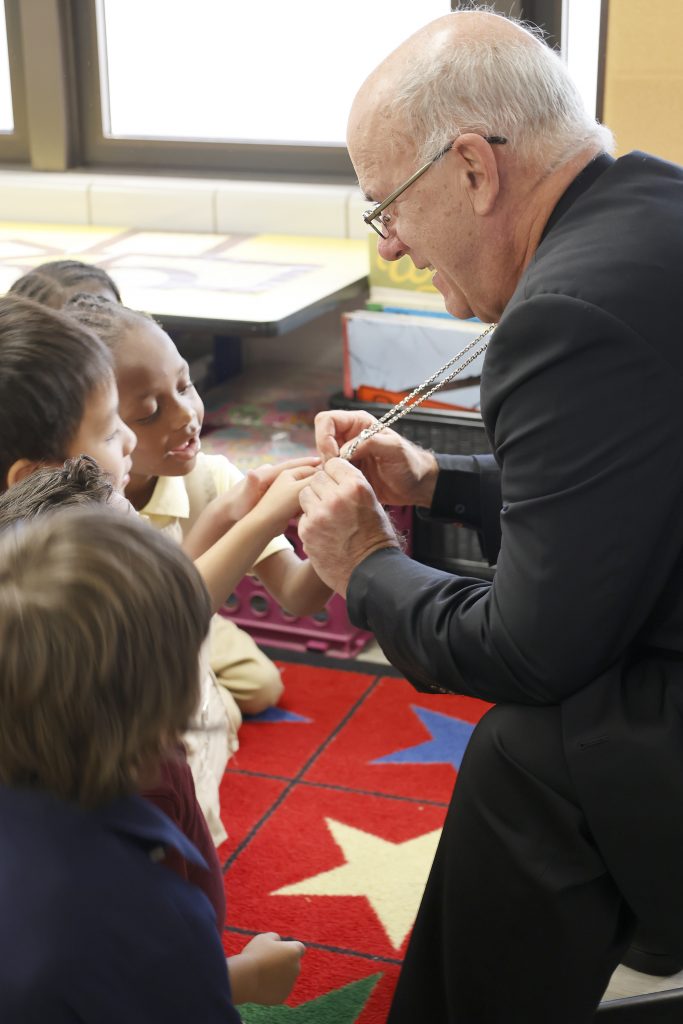 As a first-year principal, Jones confessed that she was certainly nervous to host the bishop, but the staff and priests of St. John the Baptist had worked hard to prepare students for the visit, and they conducted themselves well. 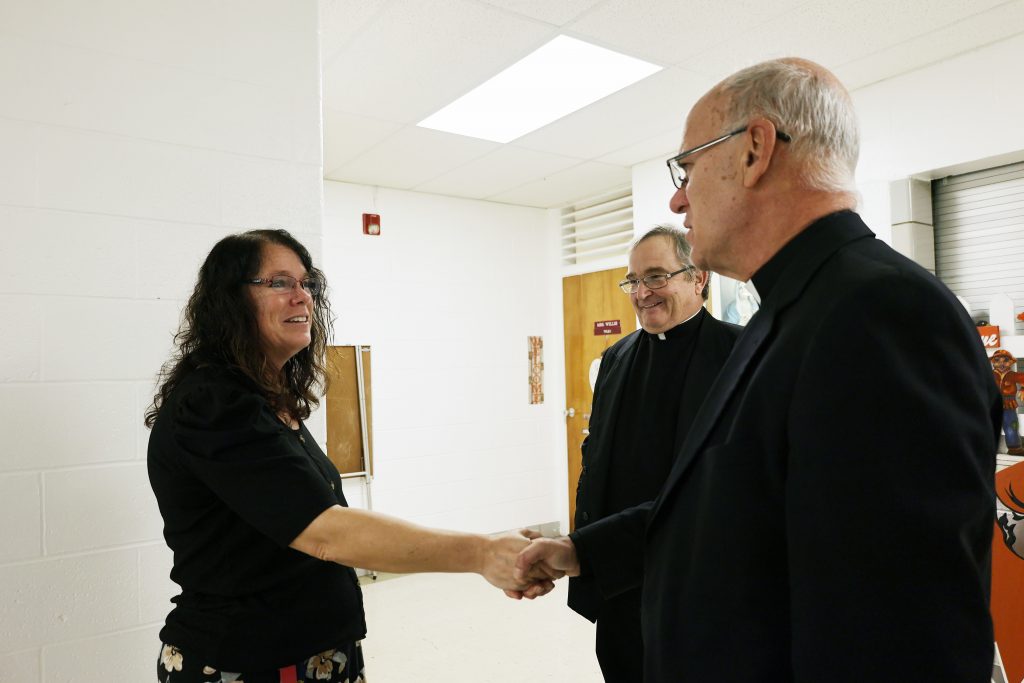 Principal Shannon Jones and greets Bishop Rhoades after Mass to show him around the school with the aid of Father Kohrman.

The school itself is small, Jones reported, with a student population of 125, an increase from previous years. Many of the students are Black and Latino and most families have been able to offer their children the opportunity for a Catholic education through Indiana’s voucher program. “A lot of what we get is word of mouth. Somebody knows somebody who has something nice to say about us and people come and check us out,” Jones stated. She believes that the small class size and individual attention that students receive draws parents to the school. 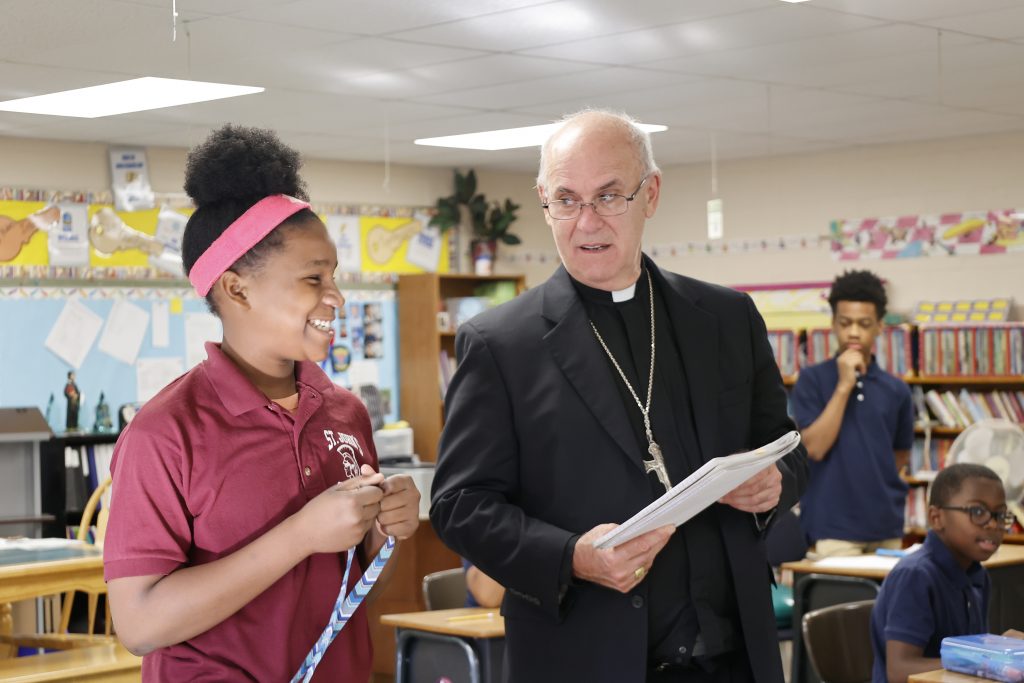 Proud to have solved a story problem in math class, a student explains the answer to Bishop Rhoades.

This year is a learning curve for both Jones and the students, many of whom are new this year, and others who have struggled under pandemic restrictions and have to re-learn social skills. The school’s theme for the year is “Love Thy Neighbor”, and Jones and the teachers are finding ways to bring that into focus in the classroom through studying one virtue each month. As the school day begins, everyone meets in the hallway for prayer and a short talk about the virtue (this month is fortitude). This is simplified so that younger students can understand as well as older students, and the day also ends with prayer in the hallway. 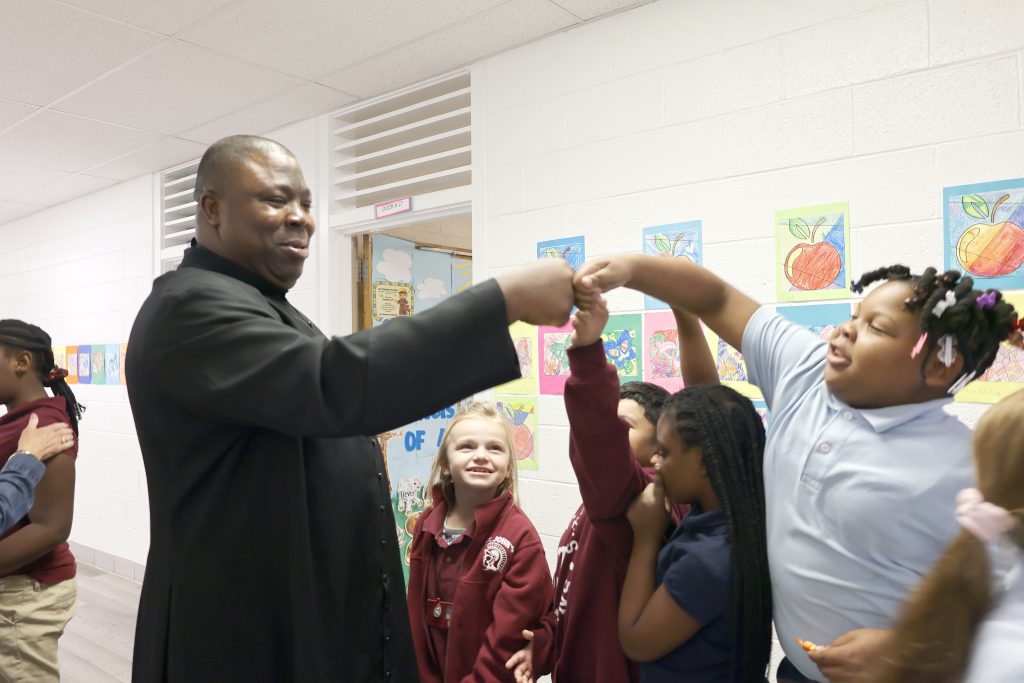 Father Sunday fist-bumps some of the students waiting in the hallway.

Working through the Mary Ann Remick Leadership Program at the University of Notre Dame has helped prepare Jones for her role as principal, especially in terms of community-building. “That was one of the nice things with going through the Remick program because a lot of that stuff I did as assignments I’ve been able to take and implement.” For example, to go along with this year’s theme, she introduced an art project about what loving one’s neighbor looks like. “The whole thought process of the Catholic identity comes first, and it should be foremost in everything that you are planning on doing.”

What makes her school so special, she shared, is the dedication of the staff and parents; “that they’re willing to work in partnership with us to make sure their kids are successful, whether it’s behavior, academics, extracurriculars, I’m finding that it just takes a phone call to reach out and people respond very well.”

Both she and Father Kohrman see the challenges that come with a small, diverse school, yet Father Kohrman also sees great potential in it. “It’s a great little school. It’s got a very unique personality to it. And really, it serves as a great evangelization tool because I think the minority are Catholic.” Those students who are not Catholic are “experiencing a different cultural reality. … And I think it’s a great testimonial to seeing the various communities, the cultural varieties working together and getting together.”

Jones affirmed that the school families are supportive “as far as bringing the kids closer to God, whether it’s the same faith that they practice at home or not.”