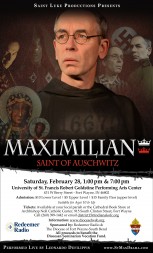 FORT WAYNE — The life of St. Maximilian Kolbe will come to the stage at the University of Saint Francis Robert Goldstine Performing Arts Center in a live production of Leonard Defilippis of St. Luke Productions. The Diocese of Fort Wayne-South Bend and Redeemer Radio are the sponsors for the two performances set Saturday, Feb. 28, at 1 and 7 p.m.

Tickets are available through parishes, the Cathedral Bookstore in the Archbishop Noll Catholic Center in Fort Wayne or through email at [email protected].

The one-man live production of “Maximilian: Saint of Auschwitz” holds a powerful message for the culture, at a time when religious freedom and values are under attack. The drama poignantly illustrates the life of Maximilian Kolbe, a Polish Catholic priest whose amazing life of service to the Church and courage in the face of attacks against his faith, led to his imprisonment in the Auschwitz concentration camp. He was forced into slave labor, tortured and finally came forward to take the place of a married man, who was condemned to death by starvation.

The newly updated production of Maximilian is a perfect drama for present times, offering the faithful courage and a real sense of hope. Proving that death is not the end, but only the beginning, this story is one of sacrificial love and ultimately, of martyrdom for the Catholic Church. St. Maximilian Kolbe has a powerful yet cautionary message for all — to not take the freedoms for granted, but rather defend them.

Since it’s re-opening in July 2012, over 25,000 people across America have witnessed the live drama, which includes technological artistry in the form of a majestic orchestral soundtrack, full professional lighting and a video backdrop that sets the story in a historical yet relevant context.

In a letter to the faithful, Bishop Kevin C. Rhoades said, “I am very happy that the play ‘Maximilian: Saint of Auschwitz’ will be performed twice here in Fort Wayne on Saturday, Feb. 28. I encourage the faithful to attend one of the performances to learn about the life and martyrdom of Saint Maximilian Kolbe.”

The bishop noted, “When I was a seminarian in Rome, I attended the canonization Mass of Father Kolbe by Pope John Paul II in St. Peter’s Square. Later as a bishop, I visited and prayed in the cell where Father Kolbe died in Auschwitz from an injection of carbolic acid. This great priest and martyr of the 20th century has been an inspiration to me and countless others of courageous witness of Christ, selfless love and passionate devotion to the Immaculate Virgin Mary.”

“I hope you are able to attend the play,” he added. “I hope that many in our diocese will be inspired by the life and death of this ‘Saint of Auschwitz.’”

The proceeds will benefit the diocesan Seminarian Vocation Fund. Visit the www.diocesefwsb.org/Maximilian for more information.