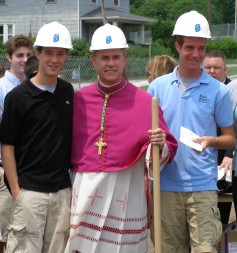 Bishop Kevin C Rhoades is pictured with students from Saint Joseph’s High School who came out for the groundbreaking ceremony at the site of the new high school.

A step ‘forward in faith’
SOUTH BEND — “This moment is triumphant and overwhelming. After so many years of having the vision and, now, seeing it become a reality, I am grateful and humbled,” said Saint Joseph’s High School Principal Susan Richter about the groundbreaking ceremony held on Friday, June 10, at the site of the new high school.

“Over 50 years ago, members of our community and our parishes funded the building of Saint Joseph’s High School; and, once again, over 1,300 people have generously made financial commitments for the new Saint Joseph’s High School. Moreover, a dedicated and hardworking group of people have ensured the tradition of excellence will continue to flourish well into the future,” Richter added.

Over 300 people attended the groundbreaking and blessing of the land officiated by Bishop Kevin C. Rhoades. The current building was constructed and opened in September of 1953 and the new building is slated to open for the 2012-2013 school year at the new address of 453 Notre Dame Ave. in South Bend.

“It’s incredible that we are all here today for this groundbreaking,” said Bishop Rhoades to the assembled crowd. “I just want to say that you’re a testament to the Gospel.”

For the past 14 months, the steering committee has worked nonstop to raise $33 million dollars, leaving only $2.5 million to secure for a $35.5 million dollar high school for the students of the Michiana area.

Called “Forward in Faith,” this aggressive project started with the donation of land from the Saint Joseph’s Regional Medical Center located in downtown South Bend. The hospital was demolished and the land was cleared allowing the school’s immediate construction once the funds were raised.

“From the beginning we received support from people outside of the traditional Saint Joseph’s High School donor base. People and organizations have made significant contributions to our project based on the community development aspect of our new campus. This has resulted in the project evolving into more than just a new high school. It has become an investment in the Near Northeast Neighborhood, the East Bank and downtown South Bend,” said Jeff Boetticher, chief advancement officer for the high school.

As Bishop Rhoades looked out on the site during the blessing, he noted that a cross stood on a hill on the property. He was told that would be the site of the new chapel.

“As we look at the building site our eyes are lifted up to the Lord,” said Bishop Rhoades, “we thank Him for his many blessings upon us now and in the future.”

Recent heavy rains made the ground at the construction site soft so Bishop Rhoades did not have the chance to bless every area of the lot, but is planning to do so at a later date. After the official blessing, everyone gathered to throw out a few symbolic shovels of dirt.

During the next couple of weeks, construction crews will begin working at the site. Fundraising will continue through the high school and donations are still being accepted.

“Our hope for future Saint Joe students is to provide a state-of-the-art facility, which will enhance the 21st century learning. It is essential to our students’ success as we continue to transform them in heart and mind ensuring that they will serve God, the Church and the world,” said Principal Richter.

Boetticher is elated with the groundbreaking and as the head of the fundraising effort recognizes the work yet to be done.
“It is my hope that this new campus serves the Saint Joseph’s High School students of tomorrow as well if not better than our current campus has for the past 58 years,” said Boetticher. “We hope this project adds to the existing sprouts of neighborhood revitalization that is currently taking place in the Near Northeast Neighborhood, the East Bank and downtown South Bend. We also hope that our new location strengthens our bonds with the entire city reinforcing the thought that we are a school that is a part of South Bend not just a school located in South Bend.”