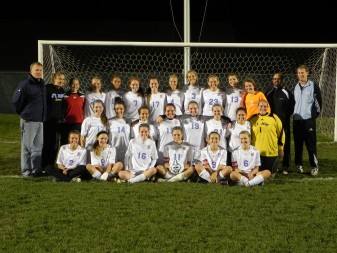 SOUTH BEND — Hoosier Hysteria found its way from the north fields of Saint Joseph’s High School to the state finals’ stage at Kuntz Stadium in Indianapolis where the Lady Indians once again reigned supreme.

The Saint Joseph’s girls’ soccer team started off the year 1-1-1, but lofty goals and determination set them out on a course that would lead to a triumphant tournament run.

“We always set our goal to win the state tournament each and every year no matter if we have a realistic shot of attaining it,” commented Head Coach Johan Kuitse. “We would rather fall short of a high mark than to succeed at a low expectation.”

“I have a tremendous respect for our team. They were committed to being better and worked so hard to be the best they could,” remarked Kuitse. “After a slow start the girls ended the season winning 21 straight games.”

The corner stone to the state’s best defense was junior goal keeper, Melissa Kuhar, who finished the season with 16 shutouts, two in the finals.

“Melissa had two or three big saves in the semifinal game that without, we would have been driving home in the early afternoon,” emphasized Kuitse. “She did such an outstanding job all year long leading from the net and positioning her defensive teammates.”

While Kuhar held down the defense, senior forward Sarah Hall was the offensive juggernaut that had the assist in the semifinal game and the lone goal in the final.

“Sarah is relentless and has a nose for the goal, she literally ran herself into the ground the first game,” insisted Kruitse. “Most goal scorers are one dimensional, but Sarah is such a team player and looks to make everyone around her better and involved in the offense.”

Coach Kuitse was at the helm when the Lady Indians won their only other title in 1998, that championship was important to him personally, but this one had a little more significance.

“This championship was a little different because I was able to share it with my daughter Lindsey (starting junior defender),” explained Kruitse. “Lindsey and I and our whole family can truly share this achievement for the rest of our lives.”

The Lady Indians will again set their sights on a state title next season as they lose just three seniors.

“I’m so proud of the girls and they all play with so much determination,” exclaimed Kruitse.