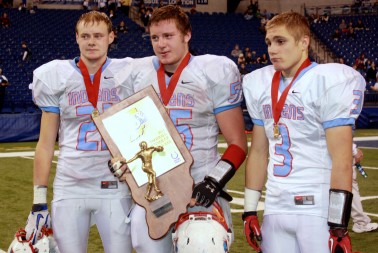 INDIANAPOLIS — In this case, the sequel wasn’t any better than the original.

“When you play a team like Chatard, if you get off to a slow start, it’s darn near impossible to come back,” said a disappointed Saint Joseph’s Head Coach Ben Downey. “I’m very proud to have made it here two years in a row, but I would have liked a better ending.”

Indeed, the Indians had difficulty getting on track against the bigger Chatard squad. As he did in 2010, Ryan Kleinschmidt led the Trojan backfield, racing 45 yards through a hole on the left side to give the Trojans a 7-0 first quarter lead.

Anthony Rulli’s fumble recovery put Saint Joseph’s in business at its own 44, but a drive stalled when the Indians failed to convert a fourth-and-two early in the second quarter.

Chatard embarked on an eight-play 67-yard march, capped by Kleinschmidt running behind a wall of blockers for an eight-yard jaunt to paydirt to make it 14-0 midway through the second quarter. The senior running back finished the day with 136 yards on 28 carries.

On its next possession, Chatard would strike again. Efficient quarterback Max VanVliet, who would also receive the IHSAA Mental Attitude Award, found Henry Hill out-and-out pattern for a 15-yard touchdown pass, and the defending state champs took a 21-0 lead into halftime.

Saint Joseph’s finally got its offense clicking in the second half. Senior quarterback Nick Carmola hit Patrick Klima for 29 yards and Collin Hickey for 30 to move the ball downfield. Carmola capped the drive on a fourth-down quarterback sneak, rolling over the back of a defender to extend the ball across the goal line and narrow the margin to 21-7.

The Indians’ defense, led by 12 tackles from safety Ray Kowalski, kept Chatard off the scoreboard the rest of the game. Missed opportunities would doom the Indians. A fourth-quarter interception and fumble — both in Chatard territory — sealed the Tribe’s fate.

“We came here knowing we couldn’t have turnovers and we had turnovers,” said a dejected Carmola afterwards. “We played hard all season. I love these guys like brothers, and that’s what makes it so hard to come up short.”

“It’s been such a privilege and an honor to play at Saint Joe for four years,” stated an emotional Hickey, who missed part of the season due to a heart ailment. “People just have no idea how special it is. I wouldn’t trade any second of these four years. I love everybody who is a part of this program. The second-half effort today really showed what we are all about. Unfortunately, we just ran into a great team today.”

For Coach Downey, two state finals trips in his first two years as a head coach did offer some solace.

“I’m just proud as can be about their effort,” said Downey of his squad, which finishes the season with a 12-3 record. “These guys did a phenomenal job all year. We love coaching them. We love their personalities and the way they represent the school. I have a tremendous amount of pride right now, but obviously a lot of disappointment, especially for the seniors because they don’t get another crack at it.”