When Saint Joseph High School girls tennis coach Bill Mountford made a midseason decision to pair Ashi and Anni Amalnathan together as a doubles team, the sisters didn’t hold back their enthusiasm.

“We honestly never expected to play together, so it was really exciting,” recalled Anni. “We thought the second we heard it that we’d be able to take it all the way to state.” 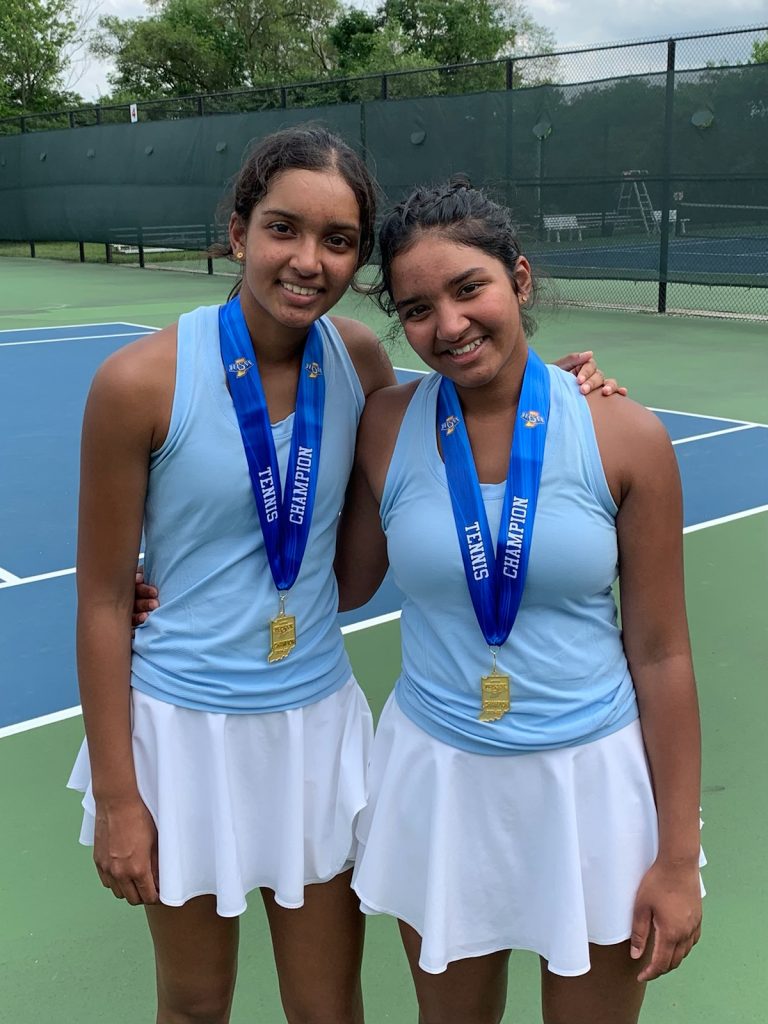 Anni’s bold prediction played out just as she envisioned. The Amalnathan sisters didn’t lose a single match together, culminating with an IHSAA Girls Tennis State Doubles Title at Park Tudor High School in Indianapolis on June 11. Their 6-3, 6-4 triumph in the championship match versus Amelia Meunier and Elizabeth Banet of Floyd Central helped Ashi and Anni end the year with a perfect 18-0 mark.

For Mountford, the lineup change was all about finding the most effective combination to beat top-ranked Carmel – the team that defeated Saint Joseph 4-1 in last year’s team state championship match. The move paid immediate dividends.

“You could tell right away they were a good team,” Mountford said of Ashi, a sophomore, and Anni, a freshman. “But then when we played at Carmel in the regular season, and they won that match, that’s when we knew we had a really special team. They had to beat them again in the state semifinals, so when they did that, we thought, ‘Ok, they’re on their way.’”

According to Mountford, the secrets to the sisters’ success are their complete tennis games, their enjoyment of each other’s company and their complementary skills.

“I think we work really well together because our playing styles mesh really well,” explained Anni. “We’re pretty much opposites, both in skillset and personality. In terms of skills, Ashi is a lot more consistent than I am, and I’m more aggressive, so we bring in two different parts of the game. In terms of personality, I’m a lot more outgoing, but she’s very calm and she takes everything slowly.”

“The bottom line is they both have really good, solid games,” said Mountford. “They’ve been very, very well trained by their father, and both of them have a real presence about them on the court, sort of a quiet confidence.”

Saint Joseph advanced to the state finals as a team for the second year in a row, but once again the Indians saw their season end at the hands of Carmel with a 3-2 defeat in the state semifinal match. The Amalnathans accounted for one of the two Saint Joseph victories, meaning that they still advanced in the individual tournament as a doubles team – one brimming with confidence.

Mountford knew that Anni and Ashi were talented enough to win a state title, as long as they didn’t underestimate their opponents in the championship match.

“They were better than I expected,” Mountford said of Meunier and Banet of Floyd Central. “But Ashi and Anni played their game. There wasn’t any big message except, ‘You have the skills and the games to beat this team. Don’t get ahead of yourself, stay in the moment, play your game and you should be ok.’”

As it turned out, the Amalnathans were better than ok. They won in straight sets, displaying a poise and composure beyond their age. Mountford credited the training they received from their father, a teaching pro at South Bend Racquet Club, as well as their experience in U.S. Junior Tournaments and in marquee high school matchups throughout the year. For Ashi and Anni, the victory didn’t just belong to them, but also to their Saint Joseph teammates and coaches.

“They were there supporting us all throughout our matches,” said Ashi. “I felt like we were all sharing that win together because we didn’t get to win state as a team, but we got to share our doubles win with them.”

Ashi and Anni became the fourth individual state champions in program history and the second consecutive for Saint Joseph, after teammate Molly Bellia captured the state singles title in 2021 as a freshman.

“Any state championship is very special,” said Mountford. “But for Saint Joseph to have the singles champion one year and the doubles champion the next year – that’s really pretty special. As I told Ashi and Anni, that’s the memory of a lifetime.”

Mountford admitted that he doesn’t know how the lineup will look next year and whether Ashi and Anni will remain together as a doubles team or play singles. The sisters said they are comfortable playing in whatever position will help the team win. For a squad that doesn’t graduate any starters and now boasts multiple individual state champions, anything is possible.

“It gives us a lot of confidence going forward, knowing how much potential we have,” said Ashi.

“Other teams will be a little more wary of us now,” Anni agreed. “People are going to know our school.”