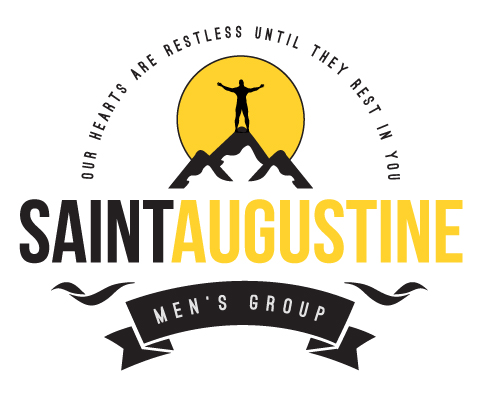 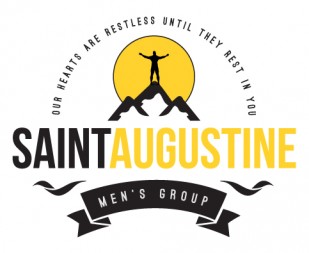 The Saint Augustine Men’s Group, with chapters in Fort Wayne and South Bend, seeks to free men from the shackles of pornography and sexual sin to live according to God’s plan of chastity.

This Catholic lay apostolate gathers to support, encourage and pray for one another through a structure rooted in Catholic teaching. They encourage the practice of prayer, the sacraments, Holy Scripture, accountability and practical tools to help men grow in chastity.

Randy Post, who responded to Father Muhlenkamp’s request, became a member of the Saint Augustine Men’s Group core team. He told Today’s Catholic, “(Pornography) destroys a man’s ability and desire to love including his wife, family, others and God. It detaches a person from reality, and they live in a fantasy world where they are not connecting with family and friends but instead withdrawing and isolating themselves.” 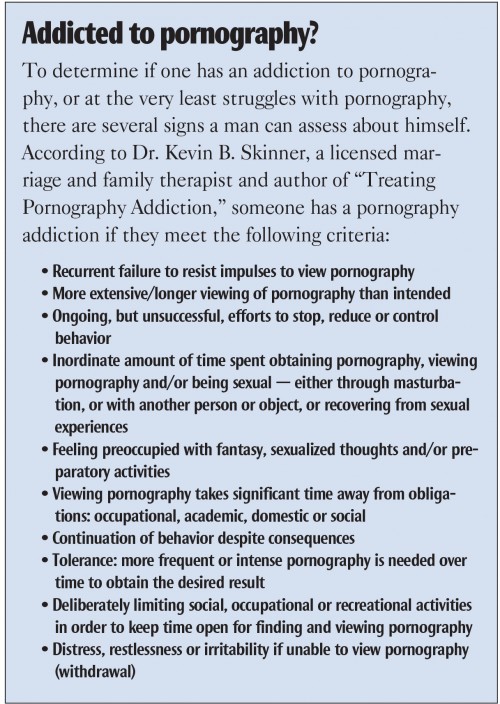 Father Muhlenkamp, who is now the pastor of St. Louis Besancon Parish in New Haven, told Today’s Catholic, “We have an issue where men aren’t viewing women as real people. That is a real woman a man is viewing in that image or video.”

He said, “Viewing pornography actually rewires the brain, so when people look at this stuff, the damage being done is tremendous. It’s scary to think that for so many young people they literally don’t know what love looks like between a man and a woman.”

“The way men work is that we give our heart to what we gaze upon and so the more a man gazes upon pornography, he gives his heart to those images and begins to withdraw more from his wife and his children, and he becomes less present,” Father Muhlenkamp said. “So if he is spending time with his wife and children, they flourish. But as he looks at pornography, isolating and withdrawing himself, this causes disorder within the family.”

“Nobody has to go and look for pornography. It goes and finds you,” Father Muhlenkamp added. “You have to go out of your way to avoid it. That’s where we are right now.”

“The pervasiveness of pornography makes it an easy distraction, and the nature of it is such that it becomes a habit and then it becomes an addiction,” said Josh Parrish, another core team member. “Pornography blocks joy. It blocks the development of virtue.”

“It’s important for men to be honest with themselves,” Parrish noted. “Men will tend to rationalize their viewing of pornography away, to view it as a sort of entitlement. The culture’s understanding is that sexuality is only there for our own pleasure and that we are entitled to it. But these are the lies that keep people from admitting that pornography is an issue.”

“We want to free men from the cycle of guilt and shame and to help lead them (each other) down the path of healing, a renewed and strengthened masculinity, a new life in Christ in order to ultimately become the men God intended us to be,” Post said.

“It is now the time and place for Catholic men in our diocese to stand up together, united in our collective desire to crush the addiction of pornography and sexual sin, and to be men of God who are not shackled by lust, but who live in true freedom serving God and family,” he added.

All gatherings are one hour. They meet one hour a week in South Bend, followed by a meeting the next week in Fort Wayne. Both meetings follow the same structure beginning with prayer, introductions, sharing a reflection from the “Clean of Heart” Catholic book, then small group discussion on a spiritual topic, core team members share practical matters in fighting pornography and then a small group discussion. This is the heart of the gathering in which men can share where they are in their journey to purity, their feelings and struggles. No one is required to share. The tone of this portion and the rest of the gathering is one of understanding, empathy, compassion and hopefulness.

“We don’t look down on someone or criticize men who have struggled recently; instead we want to lift them up, be supportive and encourage them through accountability, prayer, the sacraments, spiritual reading, penances and practical tools to grow in purity,” Post said. “During this time of the gathering, men also share ideas, tips, nuggets of wisdom (spiritual, practical or otherwise) to help each other in the battle.”

The meeting closes with the Prayer to St. Michael.

For those struggling with pornography, first it’s incumbent to admit they have a problem, the core team members report. Once they do, the doors to recovery are opened and God (and the Church) can help them in their journey to purity.

The Saint Augustine Men’s Group is exclusively for men, whether Catholic or not, who are struggling with pornography or sexual sin of any kind. It doesn’t matter where a man is at in his struggle. “We want to help him break free from the shackles of pornography and grow in relationship with our Lord,” Post said.

All information shared in the gatherings is confidential and anonymity is encouraged —share only first names.

The core team members are not counselors or trained in addiction recovery, the core team noted.

Bishop Kevin C. Rhoades supports the apostolate. “In anticipation of the upcoming World Meeting of Families, it is appropriate that we seek ways to address particular pastoral needs of today’s family,” he wrote in a letter to the apostolate organizers. “The widespread use and availability of pornography is one of the most egregious attacks on relationships and the dignity of the human person in our time.”

Bishop Rhoades has assigned Cindy Black as the diocesan advisor and liaison, and Father Muhlenkamp as spiritual advisor for the Saint Augustine Men’s Group. Black said the Secretariat for Evangelization provides support through resources and help with publicity and coordination.

Black said, “My hope for these groups is that men throughout our diocese find freedom from pornography and are inspired to take further steps to combat the widespread availability and use of images that reduce the human person to a sexual object.” “Pornography harms all involved in viewing, producing, distributing and their families,” she said. “As created in the very image and likeness of God, all people find ultimate joy in self-giving love — not destructive use of ourselves and others.”

For information about the Saint Augustine Men’s Group chapters, send an email to staugustinefwsb@gmail.com.

Proven Men Ministries, a nonprofit, Christ-centered organization, undertook a nationwide study in 2014 to obtain current and expansive data pertaining to the scope of pornography use and the impact it has on a person’s life, work, marriage and sexual behaviors.

Broken down by age: