It didn’t take long for Craig and Abby McLaren to join Sacred Heart Parish when they moved to the Warsaw area and to start giving back with their new business — Ledgeview Brewing Company.

Abby admitted that her faith journey has been “convoluted.” Her parents were Episcopalian when she was born, and she was baptized, received her first communion and confirmation at St. James Episcopal Church in Goshen. At some point, her parents felt the Episcopal church was growing too liberal and they began attending St. Mary’s Orthodox Church. When her parents decided to switch churches again, this time to St. John the Evangelist Catholic Church in Goshen, she said, “I was a rebellious teenager and said, ‘I’m done.’”

She admitted she didn’t attend Mass through her college years. She met her husband Craig, a lifelong Catholic, when they worked together in Providence, Rhode Island. She had just graduated from culinary school and he was the head cook. When they married a couple of years later, Abby said, “I knew I wanted faith involved in our marriage.”

But they also planned to marry outdoors, so she said they figured to have their marriage blessed in the Church later. After bouncing around for their jobs, the couple settled in Boston, near his mother in Rhode Island, and lived there for 10 years.

It was when Abby was pregnant with their first child, Kathryn, that “It hit me like a lightning bolt I need to get back in the Church.” She went to St. Catherine of Siena Church in Norwood, Massachusetts and began RCIA. Kathryn was born on Christmas Eve 2012, and Abby entered into complete union with the Catholic Church on Easter of 2013. Kathryn was baptized that summer. A year and a half later, Abby and Craig had their marriage blessed.

A monsignor blessed their marriage, and the ceremony, Abby said, was “inspiring — I cried. We were married six or seven years by then, but this was getting married all over again. It was a beautiful experience.” 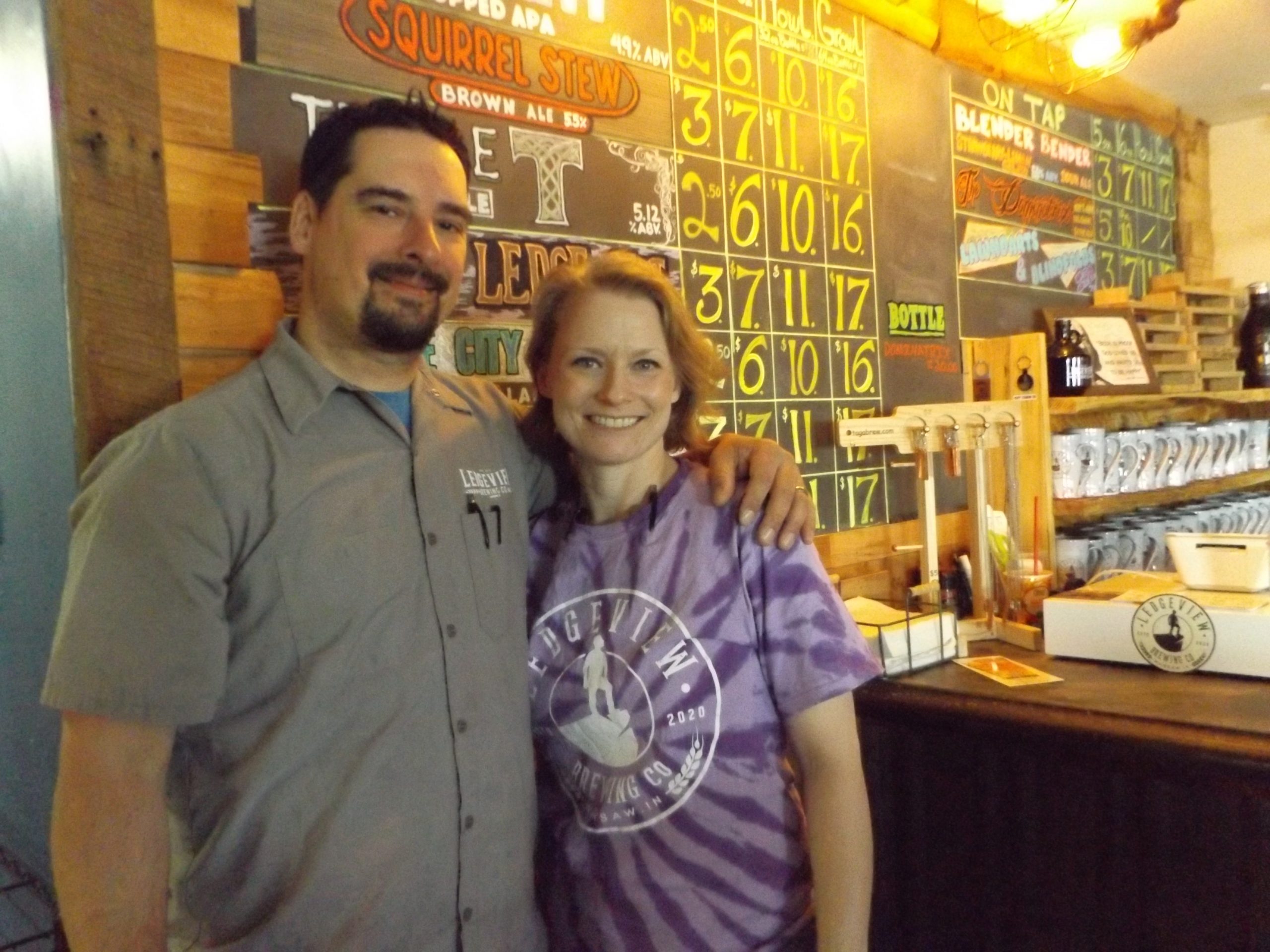 Craig and Abby McLaren stand in their first self-made business located in Warsaw. The Ledgeview Brewing Company donates on a chosen day, 20 percent of all non-alcoholic sales to a person or charity in need.

While living in Boston, Craig moved up to executive chef level of the New England Aquarium. The life of a chef is mostly working and sleeping, so Abby told him he needed a hobby.

“I found one of those make-your-own-beer-at-home kits and got it for him for Christmas,” she recalled. “He really got into it and was making so much beer!”

Friends and family said the beer was so good, he should do something with it. So he entered a home-brew competition and won in one category and placed third in another after only a year of brewing.

They began talking about owning their own place where they could brew beer and serve barbecue.

During a conversation with longtime family friend, St. John the Evangelist parishioner Mary Kay Longacre, Abby learned that there was a place just like that for sale in Warsaw.

“We always knew if we were going to do this it’d be in Indiana,” Abby said.

They viewed the location in September of 2019, made an offer in October and signed on in November. In March of 2020, they both lost their jobs because of COVID. Now they’d have time to sell their home in Boston, renovate the brewery, plan menus and buy a house in Indiana.

Renovations took place in August-December of 2020 with the help of family and friends. They opened in December, with food service only while waiting on their brewery licensing. On their menu, 95 percent of the food is made from scratch. They brine and smoke the meat, make their own coleslaw, barbecue sauce and desserts. Only a handful of things are not made in-house.

“It’s a lot of work, but it shows in the food and people appreciate that,” she said.

For Craig, it’s been more satisfying owning his own restaurant versus working in someone else’s.

“We have a whole family atmosphere here, we wanted it to be a family-friendly atmosphere,” he said. 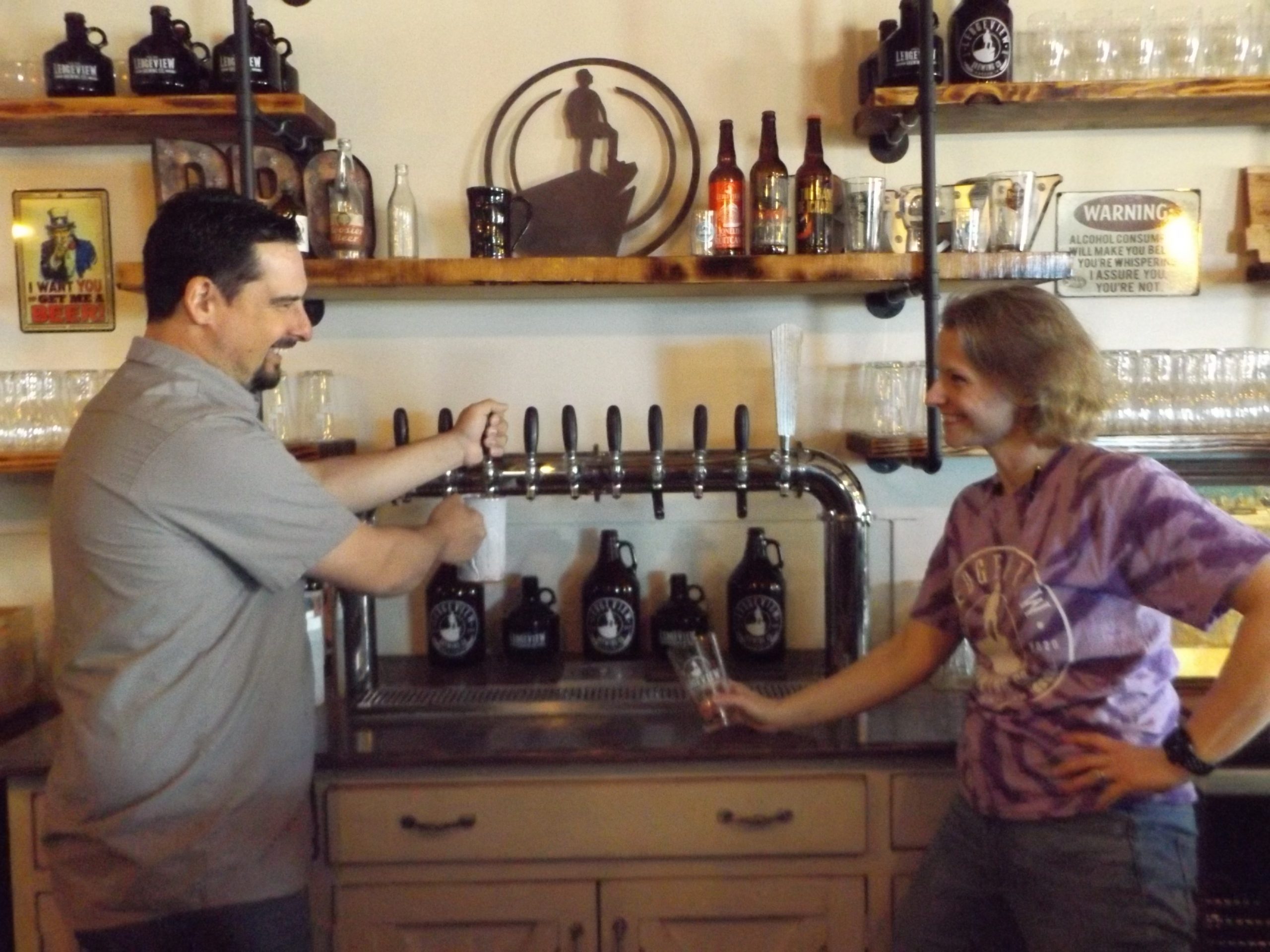 The restaurant became not only family-friendly, but community-friendly with a monthly give-back program. Abby explained how that began when a friend approached them with the idea. The friend was pregnant and learned the baby had heart valve issues, so she expected to spend a lot of time at Riley Children’s Hospital and Ronald McDonald House in the future. She asked Abby to do a give-back day to help with bills, explaining that on a chosen day, 20 percent of all non-alcoholic sales is given back to a person or charity in need.

The success of that first event led to more. Abby thought, “Why stop there? We could do the same for others.” She asked her husband if they could reach out to one non-profit a month to see what they could do to help.

It seemed logical, since their faith had always influenced their charitable giving. Growing up, “giving to the Church was just understood,” Abby said. When they started their monthly give back program, “Sacred Heart was one of the first on my mind.”

In April, Sacred Heart School was the recipient, receiving $558.45. Other organizations that have received help include Cardinal Services in Kosciusko County and the Warsaw High School Band Boosters. An upcoming organization to benefit will be Magical Meadow Horse Farm, an organization for those who need emotional support.

“It’s win-win for everyone,” she said. “It helps out great organizations, helps get their message out and helps get out our message too. It’s a way to give back and thank the people of Kosciusko and Elkhart County for their support.”

Craig said that the charitable aspect of the brewery was “a way to give back. We said from the start that we wanted to become a part of the community not just live here.”

Abby said they spoke to Father Jonathan Norton, Pastor of Sacred Heart Parish, about possibly starting a Theology on Tap on the restaurant’s patio.

“He approached us about it and we said we’d love to,” she said.

Although there are no definite plans currently, it is clear that the couple plans to continue living out their faith through their business.

For more information, call Ledgeview Brewing Company at 574-376-4445 or visit their website at www.ledgeviewbrewing.com.