NOTRE DAME — On the solemnity of the Epiphany, Sunday, Jan. 7, the parish community of Sacred Heart, at the University of Notre Dame, celebrated a Mass with Bishop Kevin C. Rhoades that marked the end of a yearlong observance of its history as a family of faith. 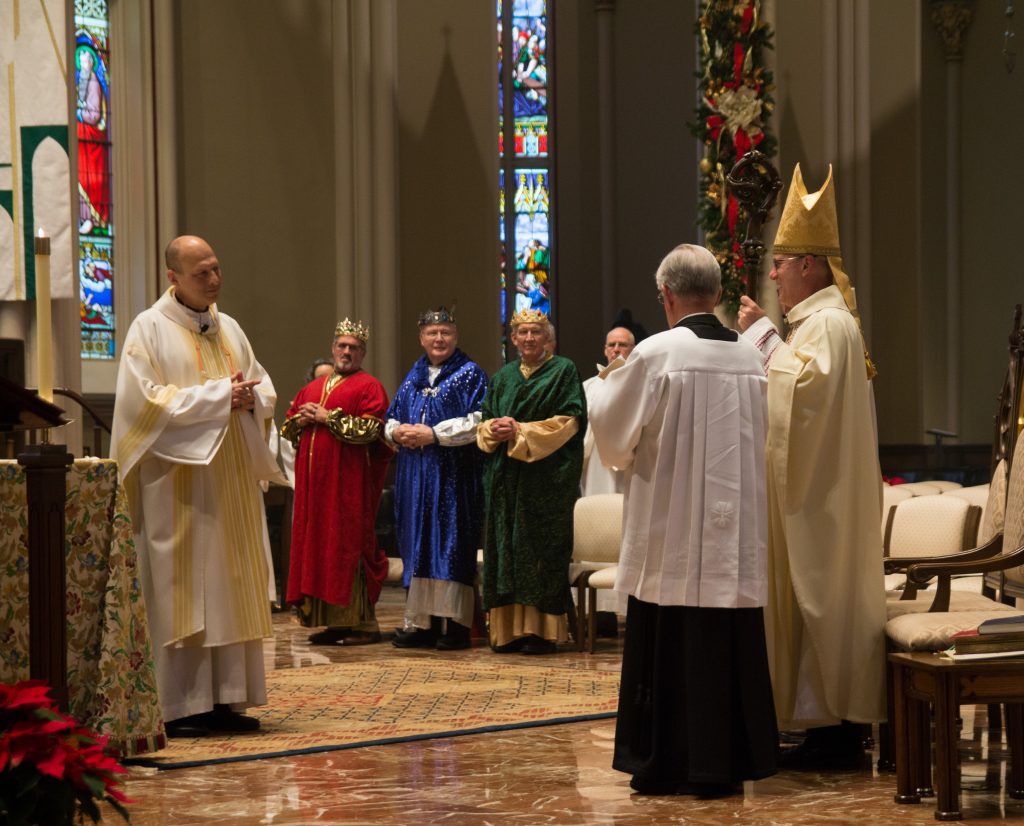 Bishop Kevin C. Rhoades, right, celebrated a Mass at the Basilica of the Sacred Heart, Notre Dame, on Jan. 7, the feast of the Epiphany, to honor the 175th anniversary of Sacred Heart Parish, founded by Father Edward Sorin and the Congregation of Holy Cross. The Mass included installation of a new pastor for the parish, Father David Scheidler, left; also on the altar are Deacon William Gallagher and parishioners depicting the Magi. — Jennifer Kedik

One of the oldest parishes in the Diocese of Fort Wayne-South Bend, a Catholic community worshipped here even prior to Father Sorin’s arrival, the bishop noted, in the famous log chapel built by Father Stephen Badin as a residence for the missionary priests and as a little place of worship. The rundown log chapel became the new home for Father Sorin and the seven Holy Cross brothers, with its second floor or attic used as the only place in the South Bend area where Catholic liturgies were celebrated. Today, Sacred Heart Parish considers 1842, the year of Father Sorin’s arrival, as the founding year of the parish.

Within a few months, a new log chapel was built, followed five years later by a larger Catholic church named in honor of the Sacred Heart of Jesus. A few decades later, in 1875, the present basilica was blessed, and later consecrated in 1888. The Crypt Church, in the lower level of the basilica, is the home of the present Sacred Heart Parish community.

“For 175 years, and even earlier, we can say that Sacred Heart Parish was the center of Catholic faith and life in this area of what became the Diocese of Fort Wayne-South Bend. It wasn’t until 1853 that another parish began, St. Joseph’s in South Bend, followed by St. Patrick’s in 1858,” said Bishop Rhoades.

In those early years of Sacred Heart Parish, parishioners included the native Potawatomi people, French settlers and eventually other immigrant Catholics from Ireland and Germany. “And it was from here that Father Sorin, and then other Holy Cross priests, ministered to Catholics throughout this region. We can call them ‘circuit- riders,’ who, like the other French missionaries who preceded them, travelled by horse and by foot to provide spiritual and pastoral care to the scattered population of Catholics in the region,” he said. 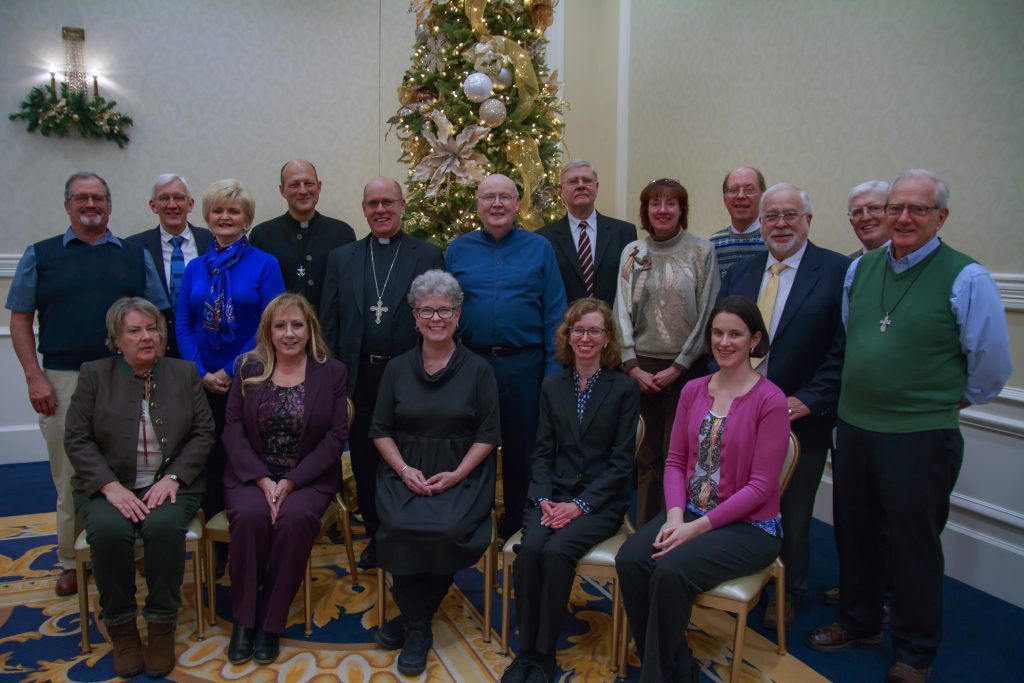 For a number of years, while organizing and running the school at Notre Dame, Father Sorin and the first Holy Cross priests at Sacred Heart would visit Catholics and celebrate Masses at mission stations throughout northwest Indiana and southern Michigan. The bishop thanked God for them and for those pioneer Catholics, the faith-filled native-Americans and immigrants, as well as for the Holy Cross Brothers and Sisters, who spread and lived the Gospel of Jesus in this area.

“You, the present-day parishioners of Sacred Heart Parish, have a rich parish history and heritage,” he continued. “But you also have a rich parish life today. Though many parishes have sprung from Sacred Heart, your parish remains as a community of faith, hope and love here on the campus of the University of Notre Dame. Like every parish, you are called to be an evangelizing community, one that not only worships together, but also one that, as Pope Francis says so often, ‘goes out,’ reaches out to others with the love of Christ through your service of the poor and needy, the sick and the suffering. Inspired by the early missionaries, you are called to be missionaries today, not only supporting the Church’s missionary efforts around the world, but also right here at Notre Dame and South Bend.

“Every Catholic parish is called to be a community of missionary disciples, a community of committed disciples of Jesus Christ who go out to witness to the Lord Jesus, reaching out to all those today who are searching, like the wise men, for truth and meaning in their lives,” he said. “The wise men, the Magi, found that meaning and truth when they entered that house in Bethlehem and encountered the little child with Mary his mother. They were overjoyed, the Gospel tells us. This is what the encounter with Jesus brings – true joy, the joy of love, the joy of faith. Every parish is called to witness to the joy of the Gospel, the joy of faith in the God who has become for us a little child so much does He love us.

“And what does one do when one encounters this amazing, humble mystery of God’s love?” the bishop asked. “The Magi teach us. The Gospel tells us that ‘they prostrated themselves and did him homage.’ ‘They opened their treasures and offered him gifts of gold, frankincense and myrrh.’ They adored the Lord, the King of heaven and earth, who became an infant wrapped in swaddling clothes who lay in a manger.

“That’s what we do every time we come to Mass. We gather to worship and adore the Lord who humbled Himself in becoming a man and who still humbles Himself, descending from heaven, and becoming present to us under the humble forms of bread and wine. And we offer Him gifts. At every Mass, we offer Him our praise, our sufferings, our work, indeed our entire lives, which, in the Eucharistic sacrifice, are united with the offering of Christ.

“At this Mass on the great feast of the Epiphany, as we celebrate the closing of this 175th anniversary year of Sacred Heart Parish, I am happy to be installing Father David Scheidler as your new pastor,” the bishop continued. “Let us pray at this Mass for this devoted Holy Cross priest who joyfully assumes his new duties. We pray that he may be filled with the missionary spirit of Father Sorin, the spiritual wisdom of Blessed Basil Moreau, and the holy humility of St. Andre. I know you will support him with your love and prayers.”

The Gospel of the day ended with the Magi returning to their country by another way. They did not return to King Herod.

“When we encounter the Lord and worship Him, we also are called to return home by another way, not to go back to Herod, to sin and darkness,” Bishop Rhoades said. “We are called to travel another route – the way of the Gospel, the path of goodness, love, and salvation. The Holy Eucharist is our nourishment to travel that path. May the Heart of Jesus in the Blessed Sacrament, which has sustained and strengthened the Catholics of this parish for 175 years, always be praised, adored, and loved here with grateful affection. And may Mary our mother, in whose arms the wise men found Jesus, be with you and accompany you with her maternal love and protection.”