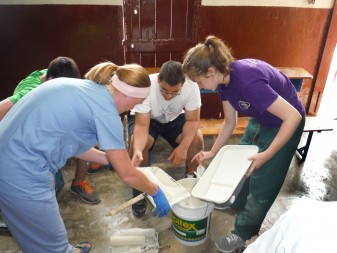 A team cleans up after painting eight school classrooms in a day and a half. Pictured from left are Shane Powers (hidden), Leigh Cox, Bobbi Zogbi and Maddy Cox.

WARSAW — Sacred Heart Parish in Warsaw sent 10 teens and adults to work on the St. John Paul II School in Kenscoff, Haiti. Their mission was to paint classrooms at the school associated with their mission twin parish, St. Nicholas in Kenscoff. The team consisted of Pat and Leigh Cox and their daughter Maddy, Diane Wack, Mike Powers and son Shane, Bobby Zogbi, Ida and Bob List, all from Sacred Heart, and Linda Thieman, the team’s guide from St. Henry, Ohio, who has led nearly 70 missions to Haiti.

The team arrived in Port-au-Prince, Haiti, on the afternoon of June 16 and after a bumpy ride to Kenscoff, they settled into their accommodations at Father Isaac’s rectory and had a meal. The next morning the team began with Mass at 6:15 a.m. before gathering the materials needed to begin painting the classrooms. Since school was still in session, with testing in progress, the team was limited on the rooms available to paint. But by lunchtime three rooms were completed.

Father Isaac and Father Raynold had lunch prepared for the team, which was back to painting by 1 p.m. The students moved their desks out to the patio and other areas so the team could access their classrooms allowing another three rooms to be painted.

The team played with some of the parish children while their moms were either in a Bible class or choir practice. Despite the language barrier, the “Cat’s in the Cradle,” hand tricks and bubbles were enjoyed by all.

That evening, Bill Nathan, the interpreter, gave a talk on his life in Haiti. He was orphaned at the age of six and became a restavek (a child slave) to the family that adopted him. He was rescued from that situation and brought to St. Joseph’s Home for Boys in Port-au-Prince. At St. Joseph’s, he was able to grow up in a safe environment and receive an education. He is now the director of the home.

The next morning after breakfast the team watched the students gather in the courtyard for school. They began with songs, their national anthem and flag raising. The principal had a student give the morning announcements and then all the students turned to their visitors and said “Bonjour.” The team then visited each class and passed out candy. Painting resumed and a total of eight classrooms were completed.

That afternoon the team visited Wings of Hope, a home for mentally or physically handicapped children and young adults. Since some Haitians still practice voodoo, those with physical or mental handicaps are considered possessed and thought of as throw-aways in Haiti. The home assists them in finding meaning and purpose and prepares them to be assimilated into society. Josephine, a teenager there, sang a beautiful rendition of “What A Wonderful World” that she taught herself not having had any English language training.

The remainder of time was spent visiting other orphanages, boys’ homes, Mother Teresa’s Baby Hospital, Cité Soleil, the largest slum in the hemisphere, some chapels around Kenscoff and St. Joseph’s Home for Boys in Port-au-Prince where they spent the remainder of their stay in Haiti.

The team felt blessed to be able to attend three daily Masses plus Sunday Mass at their Mission Twin Parish, St. Nicholas in Kenscoff. Father Isaac, and Father Raynold were gracious hosts and made the group feel welcome during their stay there. They came to realize that they came to Haiti as visitors, became family and returned home as ambassadors.