Bishop Kevin C. Rhoades celebrated Mass with students at Sacred Heart School in Warsaw Tuesday, March 16, and told them he “couldn’t think of a better way to start my day.”

Because the students were learning about the virtue of persistence that week, Bishop Rhoades thanked them for their “persistence in faith during this pandemic.”

During his homily, Bishop Rhoades told the students his favorite subject while in school was Bible history. He asked them to recall four major prophets from the Old Testament — Isaiah, Jeremiah, Ezekiel and Daniel. He also commended the young student who gave the first reading, Oliver Dixon, saying he did a great job and that Father Norton should put him on the lector list for Sundays. 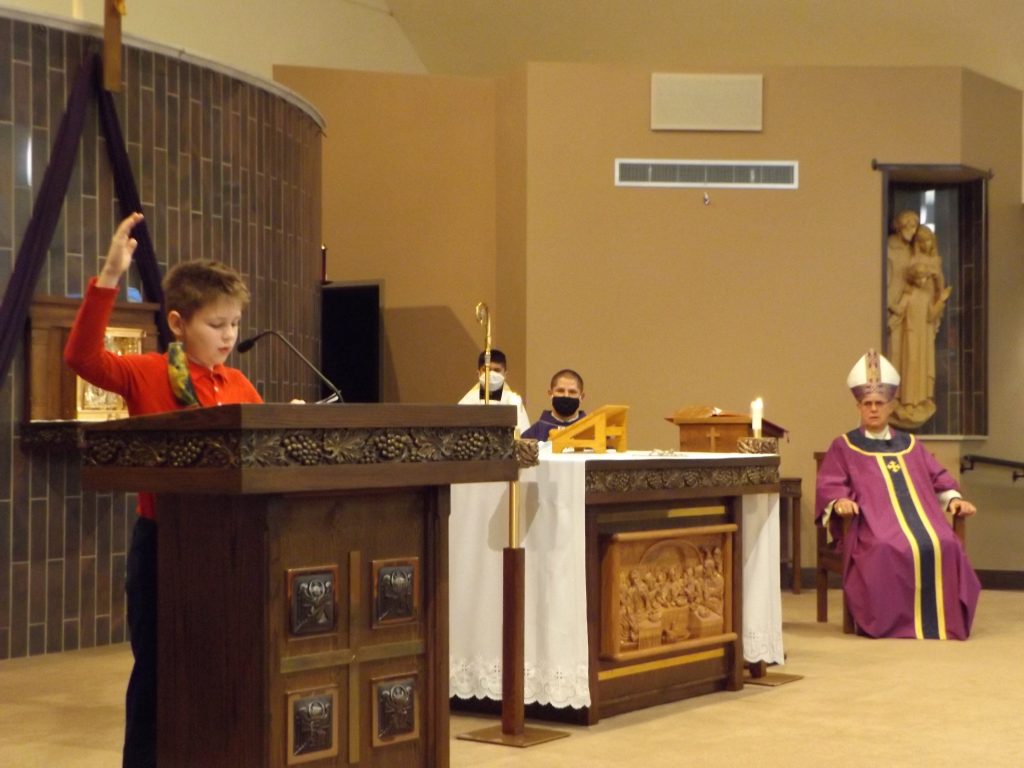 Photos by Denise Fedorow
A student of Sacred Heart School in Warsaw leads the responsorial Psalm during a Mass celebrated by Bishop Kevin C. Rhoades March 16 at the school.

The bishop spoke about the reading from Ezekiel 47: 1-9, 12 sharing with the students that the prophets had visions of the future and that the water flowing from the temple was a foreshadowing of Jesus, the new temple.

“God dwelled in the temple, and God dwells in Jesus, who is greater than any building,” he said.

He asked the students if they recalled what flowed from Jesus on the cross when the soldier put the sword in his side. He was pleased with one young man’s response: “grace and mercy.” “What a beautiful answer,” Bishop Rhoades said.

When another student responded “blood and water,” he told them, “The water represents the Holy Spirit — the grace and mercy that comes from the heart of Jesus.”

As he spoke about the Gospel reading, John 5: 1-16, which told of the miracle of healing the lame man, he said, “That one man was there for 38 years, lame and sick — talk about persistence!”

Jesus’ compassion healed the man instantaneously, the bishop noted. “Think about your own life in this season of Lent. He wants to heal us. Confession gives us new life and then we’re to bear good fruit — live our lives like Jesus and help the sick and poor and bring His life and love to others. The holy Eucharist helps us do that, because we receive the body and blood of Jesus, which gives us the grace to love like Jesus and bring Him to others.” 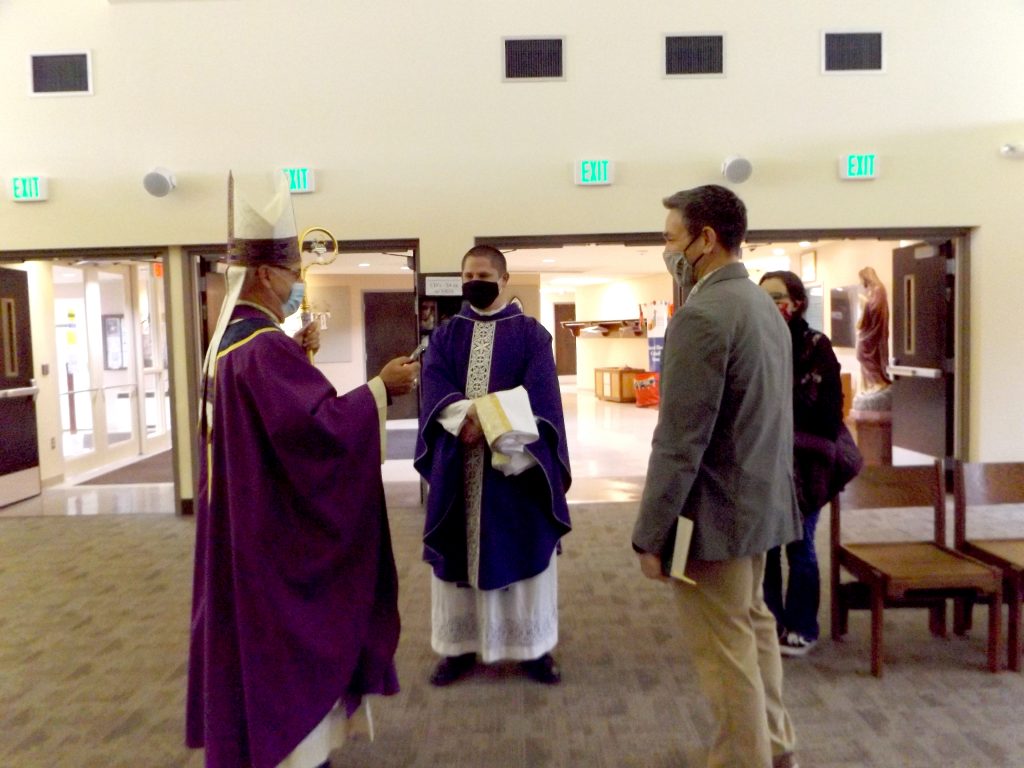 Sacred Heart principal Mike McClain shared that the school has begun using the Virtue Equals Strength program, a virtue-based formation program for Catholic schools, colleges and parishes. McClain said the program focuses on a virtue of the week and provides resources including praise and worship music, short videos and the ability to integrate the virtue into the classroom and beyond. The week of March 15-19, the virtue was resilience and persistence.

“They are showing us how they incorporate it into their lives and how they interact with one another at school,” he said.

The school also has a STREAM program, which stands for science, technology, religion, engineering, arts and math.

“Being in the orthopedic capital of the world we thought that the STEM factor was important but also appreciate having our faith and fine arts interwoven into it,” he said.

The program is called Project Lead the Way and helps students understand that “we identify as Christians first. We refer to it as our ‘Catholic lens.’ We integrate faith into the academics, and we’re virtuous in how we deal with each other.”

Although athletics and arts have been challenging during the pandemic, at Sacred Heart they’re managing to still have interleague sports games with the public schools for volleyball, soccer, boys and girls basketball and track and field.

Many of school clubs like twirling and tumbling, the running club and robotics have also been able to meet either virtually or in person with COVID-19 protocols. The very popular LEGO club has not been able to meet, however.

McClain praised the art and music teachers for their creativity in interweaving faith and making things happen. The school held an outdoor Christmas festival with a live Nativity, at which the fourth graders played “Once in a Royal David City” on their recorders, fifth graders played “Little Drummer Boy” on bucket drums and the sixth grade choir performed several pieces.

“It was a cold night, but it was one of those times when we were able to get together and celebrate safely,” McClain said.

An outdoor spring festival is planned for mid-May.

McClain, who is in his second year as principal at Sacred Heart, said some safety improvements are being made to the facility.

“Every school says they’re a family but at Sacred Heart you feel that sense of community, warmth and love the minute you come in the door,” he said. 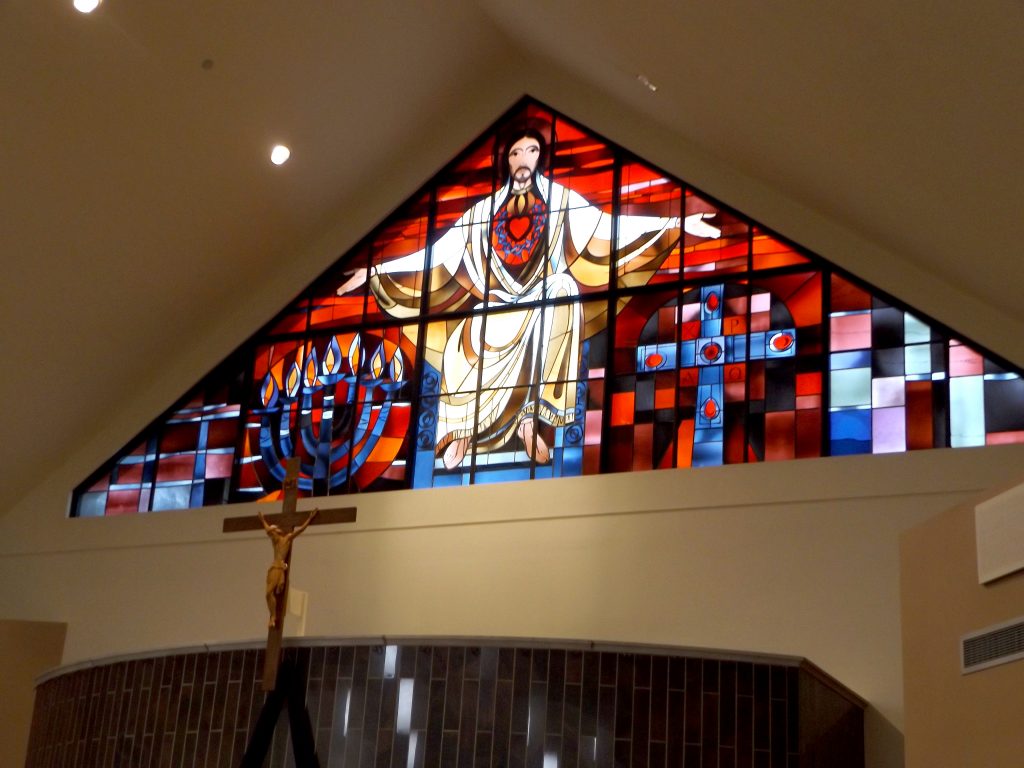 Creating a culture of prayer and instilling Christian values are priorities at Sacred Heart School.

The principal said he and the faculty and staff knew this would be a challenging year, so he and Father Norton wanted the focus to be on seeking joy. They start each day with praise and worship music, which has changed to Gregorian chant during Lent.

At the end of Mass, Bishop Rhoades asked the students if they knew the clerical title of St. Patrick. He asked them to pray that the Bishop of Ireland intercede for him on St. Patrick’s Day and said he’d be praying for them as well.

After the recession, McClain also led the students in the Prayer of the Most Holy Redeemer. It’s how they end each student Mass, he said, and goes along with Father Norton’s desire to create a culture of prayer in the students.

At Sacred Heart, McClain said they’re seeking joy and “making ourselves a beacon of light to the community around us and beyond.”