The following is the text of Bishop Rhoades’ homily at the Red Masses on October 2 and 3:

The Red Mass is a Votive Mass of the Holy Spirit in which we pray for those who serve in legal and political professions. We ask our Divine Advocate, the Holy Spirit, the Counselor, to enlighten you in your profession, to assist you with His gifts of wisdom, understanding, counsel, fortitude, knowledge, piety, and fear of the Lord. We’ve received these seven gifts in Baptism and Confirmation, but we still pray for them, that they be stirred up in our souls. In fact, it is good to call upon the Holy Spirit every day, especially before making important decisions and at the beginning and end of important actions. The Holy Spirit, as Jesus said, teaches us everything and reminds us of all that He told us. The Holy Spirit helps us to live in Christ, to bear witness to Him in word and action, including in our professional lives. 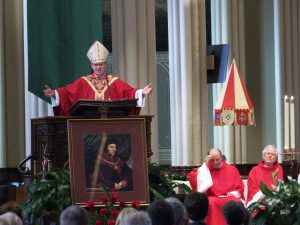 Bishop Kevin C. Rhoades gives the homily during a Red Mass celebrated at the Basilica of the Sacred Heart at the University of Notre Dame on Oct. 2.

In preparing this homily, I thought about Senator Dianne Feinstein’s questioning of Notre Dame law professor Amy Coney Barrett, especially the Senator’s concern that Catholic dogma lives loudly within Professor Barrett. Senator Feinstein clearly meant this in a disparaging way, suggesting that a believing, practicing Catholic would not be a good and impartial judge.

At this Red Mass, we are asking the Holy Spirit to bestow His gifts upon you who serve as lawyers, judges, law professors, law students, and civic officials. If our prayer is answered, you know what is going to happen? Dogma will live loudly within you! Your faith won’t be just some private, compartmentalized appendage to your life. It will be real and authentic, inspiring you to serve the common good, justice, human life and dignity, and peace. It will inspire you to be generous, to care for the weak and the poor, and to protect the vulnerable.

The questioning by Senator Feinstein, which really brought out into the open a prejudice that is shared by many others, suggests that a neutral public square must be a secularist public square. Thankfully, the United States does not have a state religion. We believe in and treasure religious liberty. So we must reject the view of those who, wittingly or unwittingly, seek to impose a secular creed, a state religion of secularism, and who seek to contain religious ideas and motivations, especially Catholic ones, to the private sphere. What would our nation be like if it was deprived of lawmakers, judges, and others who act from consciences and characters inspired and shaped by faith, those who, for example, worked to abolish slavery and to promote civil rights? Where would we be today if dogma did not live loudly in the minds and hearts of our nation’s founders, in Dr. Martin Luther King Jr., and so many others?

The questioners of Professor Barrett and others seeking to discredit her suggest that she believes that judges should be free to put their personal religious views ahead of their judicial oath to faithfully follow the law. This is a false claim. In the article referenced by the Senate inquisitors, Professor Barrett and Professor John Garvey studied the issue of the dilemma faced by a faithful Catholic judge faced with issuing a death penalty sentence. Of course, we have a federal recusal statute to allow relief to judges in such predicaments. Our nation seeks to uphold the rights of conscience. Would the critics of Professor Barrett say that federal judges before the Civil War should have been required to enforce the fugitive slave laws? Should they not have been allowed to recuse themselves? In so doing, they are not violating their judicial oath nor their conscience. Unfortunately, the rights of conscience and religious liberty are increasingly threatened in our nation today.

As Catholics, we uphold the principle of the rule of law in which the law is sovereign and not the arbitrary will of individuals. As St. John Paul II taught, “authentic democracy is possible only in a state ruled by law” (CA 44). In fact, the rule of law is a fundamental component of the common good. At the same time, we do not consider every civil law to be supreme. Otherwise, laws would never change and unjust laws would never be repealed.

We all have a responsibility to work within our democratic institutions and through political participation, especially voting, towards the enactment of just laws. Legislators have a special responsibility for the crafting and legislation of laws that are just, that respect, recognize, and guarantee the fundamental rights of the human person.  And to repeal laws that are unjust, laws which, as St. Augustine and St. Thomas Aquinas taught, are not really laws, but corruptions of the law.

But where does this leave judges? They take a judicial oath to faithfully follow the Constitution and our laws. Normally, giving judgment in accord with a civil law is good. But there are some cases (a very narrow set of cases) when doing so could involve illicit cooperation in a morally evil action. I’ve already mentioned the situation written about by Professors Barrett and Garvey — signing death sentences. Another situation would be the ordering of an abortion, something prohibited by our Catholic faith. Does this make a conscientious Catholic unfit for judicial service in the United States? I would hope not. Recusal should be an option, which respects both the rule of law and the judge’s freedom of conscience. As one legal scholar wrote: “The community should not command judges with moral qualms to order abortions or sign death sentences. If these judges obey, they have to that extent diminished their humanity” (Ledewitz).

The great saint and jurist whom we remember at every Red Mass, Thomas More, in conscience refused to take the Oath of Supremacy. He refused to recognize the king as head of the Church in England. Thomas More had a well-formed Christian conscience. He strived to act morally and truthfully in a difficult situation. He would not take an oath in violation of God’s law, even though it meant imprisonment and death. He died, as he said at the scaffold, as “the king’s loyal servant, but God’s servant first.”  He not only had the Holy Spirit’s gift of wisdom, but also the Holy Spirit’s gift of fortitude or courage. Because of this, I would say that dogma really lived loudly within St. Thomas More, so loudly that he became a martyr. When faith is alive in our hearts, when dogma lives loudly within us, when we are open to the Holy Spirit’s gifts, we possess the wisdom and courage to act morally and truthfully according to a well-formed conscience.

In her wonderful speech to the graduates of the Notre Dame Law School in 2006, Professor Barrett expressed her hope that they would be a different kind of lawyer in the Notre Dame tradition. She explained that this means that they would see their legal career as a means to an end, that end being the building of the kingdom of God. It is astonishing to me that some critics found these words objectionable.