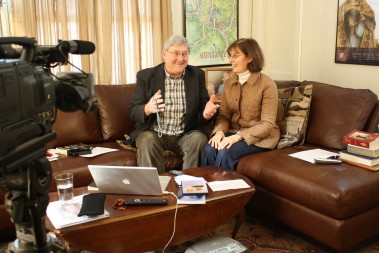 Diane Freeby Denis and Cathy Nolan pray the rosary daily, live, via the Internet. They compare their effort to David, who was laughed at by Goliath. “Our little rosary is humble,” says Denis, “prayed from the heart. It’s exciting to think about people joining us every day to pray the rosary, responding to Our Lady’s call for family prayer and consecrating the Internet to her.”

SOUTH BEND — The Internet, like so much of today’s modern technology, has the power to help promote both good and evil. While one person receives joy watching videos of a new grandchild who lives thousands of miles away, another person finds himself spiraling downward in an addiction to on-line pornography. People are bombarded with choices every time they log on. One South Bend couple wants to use the power of prayer to reclaim the Internet for God, making the holy rosary available to everyone online.

Denis and Cathy Nolan already make the rosary a part of their daily life, praying together as a couple every morning and making time for a daily family rosary. Convinced of the many graces received from praying the rosary, the Nolan’s hope to make the experience available for everyone via the Internet.

“We begin each rosary, feeling like David with his little stone, consecrating the Internet to her,” explains Denis.

“This rosary is like any other rosary, except for the little sharings we give between the decades,” adds Cathy. “The sharings may help build our faith and focus us on the grace of that decade. Also, when people pray together, two or three are gathered, the Lord is there with them!”

The rosary is prayed daily at 11 a.m. EST, at www.marytv.tv. Those who can’t pray at that time may use the “video on demand” feature and pray at their convenience.

“The response has been incredible,” says Denis. “By the second day we had already used up bandwidth intended for a month and so had to switch to a TV channel with little pop up ads (that you can delete — they  aren’t distracting). By the second day, several hundred people throughout the U.S. were praying with us, and people from 18 countries, including Ireland, Belgium, Portugal, Puerto Rico, India, Canada, Argentina, Bosnia Hercegovina and Australia.”

MaryTV has a local office and studio in Mishawaka, courtesy of a local religious order. Denis recalls 10 years ago when he had a Franciscan cardinal, a Franciscan bishop and a Franciscan priest on the MaryTV board.

“I boldly asked the Franciscan Sisters of Perpetual Adoration at Mt. Alverno in Mishawaka if we could have an office there. I learned later that they made a deal with Our Lady. They’d give us space for an office, shipping room, editing suite and film studio — at no cost — and Our Lady would give them vocations. At the time they had none. Today they’re bursting at the seams with new vocations — so much so I’m sure they could use the space we’ve taken over. But I don’t think they are going to ask for it back. Not long ago the provincial told me they consider us their gift to Our Lady. And we feel a strong spiritual support from the sisters. … We’re very grateful.”

The Nolan’s say the Internet rosary is a root for MaryTV.

“What Our Lady wants to do will come to fruition only through prayer. There are some incredible television Web sites out there right now … but it would be a mistake to compare ourselves with others. I think we’re at exactly the right spot. This simple, humble little rosary on the Internet everyday is exactly what we’re supposed to be doing right now — while we’re waiting for funds to finish construction of our television station in Medjugorje.”
MaryTV, which is a nonprofit group, has already raised $1 million to put toward the broadcast facility and another $1 million is needed for completion. Several technical and professionals with network television experience are waiting to set up the cameras and editing equipment to begin broadcasting as soon as the building is completed.