Executive Director Jackie Appleman spoke of the challenges and benefits of moving ahead with the annual event virtually.

“One of the challenges is that the program time is shorter for the speaker,” she said. “And we’re disappointed we’re not able to see everyone in person.”

But she said usually about 800 people attend the event, and organizers didn’t see any way to make that happen in person this year.

“On the upside, a lot of other organizations have been doing virtual events so we’ve been able to learn from them.” She added that they were glad they’d still have the opportunity to share successes and challenges of the year with supporters. She said Right to Life Michiana was encouraging people to host watch parties with groups of people. 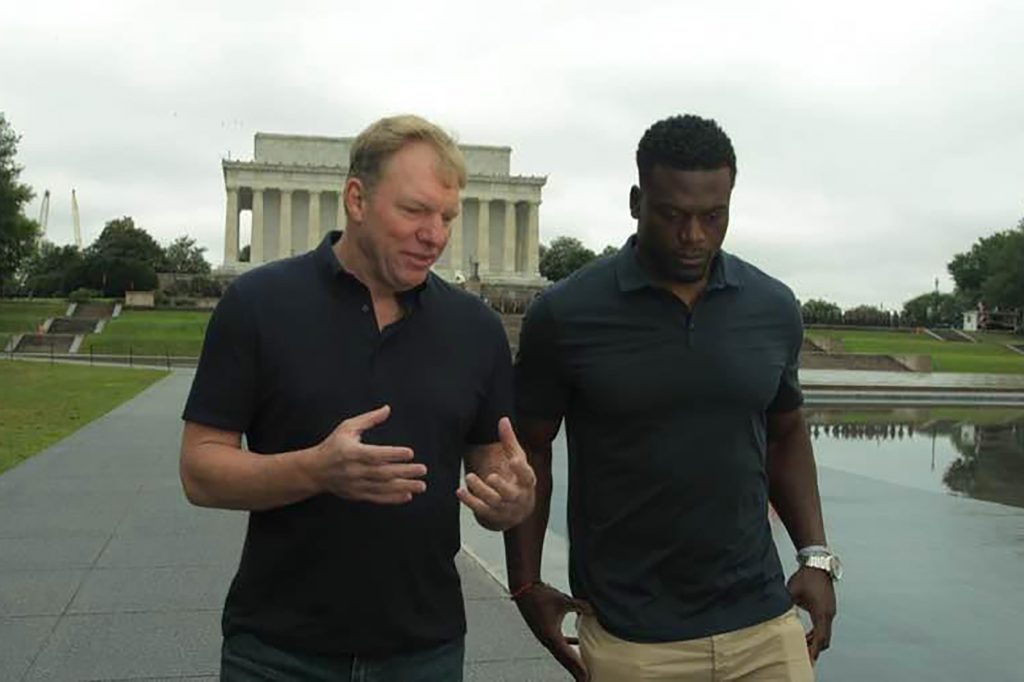 Provided by Jason Scott Jones
Jason Scott Jones, left, and National Football League player Benjamin Watson talk during the production of the documentary film, “Divided Hearts in America.” The film examines how the culture of abortion has its roots in other sins against human personhood and dignity. Jones was the keynote speaker at this year’s Right to Life Michiana banquet, which took place virtually due to the COVID-19 pandemic.

Another benefit of the online event is that people out of state could participate as well. It was free to register and there was also an online auction in which registrants could participate.

The keynote speaker was Jason Scott Jones, film producer and human rights activist. He produced the film “Bella,” released in October 2007. “Bella” is a story about two friends each with terrible secrets: One was responsible for the reckless killing of a child, and the other is pregnant and planning to get an abortion. The film won a prestigious Toronto Film Festival award, and Jones said the film was acclaimed when it was released for being one of the first to positively portray a Latino family.

Jones also produced the recently released documentary “Divided Hearts in America,” starring NFL player Benjamin Watson. The movie is based on the ongoing debate over abortion.

Bishop Kevin C. Rhoades gave the opening prayer. He said he missed not being able to be together but was thankful to God that the participants could be together spiritually and via technology.

Bishop Rhoades noted that the event was being broadcast on a special day, “the feast day of a great apostle for life — St. John Paul II, who wrote the beautiful encyclical ‘The Gospel of Life’ that calls upon all of us — not just Catholics but all disciples of Christ to proclaim, celebrate and serve the Gospel of life.”

Jones shared his journey to becoming a pro-life and human rights activist in his address and elaborated in an interview with Today’s Catholic afterward.

When the movie “Bella” was released, he said at the time that he’d be happy to know the name of one child whose mother changed her mind about aborting him or her because of the film. “We stopped counting at 1,000,” he said.

Jones said a lot of people think his involvement with the pro-life movement began with the film.

“I wish that was the case,” he said. “My journey began more tragically.”

His mother had him when she was 16. They didn’t attend church. One Saturday morning in 1988, his high school girlfriend rode her bike five miles to his house to tell him she was pregnant.

They decided they wanted to have the baby and came up with a plan. The young couple decided Jones would try to join the U.S. Army, and if he got in they’d tell their families when he completed basic training.

“Ever since I was a little boy, I dreamed of being a father. My daydream always was to have a family,” he said, adding his dad was mostly gone in the military the first years of his life. He said he’d lay in his bunk at basic training and think to himself, “How lucky am I? I’m 17 years old, a soldier and I already have a family — how lucky am I?’

One Sunday, the soldiers were told to line up, Protestants in one line and Catholics in another, to be taken to church. He said he thought, ‘I have blond hair and blue eyes, I must be Protestant’ so he was taken to an Episcopal church.

The next Sunday he told the drill sergeant that he didn’t believe in God and they couldn’t make him go to church. Instead, he was put on cleaning pots and pans on Sundays.

When he had two weeks left in basic training, he received a call from his girlfriend. She was crying harder than he ever heard anyone cry.

“The only way I can describe it to you is that her soul was crying. She kept saying, ‘I’m sorry, I’m sorry — it wasn’t me.’ Her father grabbed the phone and told me ‘I know your secret. It’s gone and you can come home now. I took Katie to get an abortion.’”

Jones was so distraught he told his drill sergeant, “Call the police, he killed my baby!” His drill sergeant informed him abortion was legal. He told Jones to call his girlfriend and for two hours he listened to her cry.

“I felt like a failure. I couldn’t protect my girlfriend and our child,” he said. He told her, “I promise you, if it takes the rest of my life, I’ll make abortion illegal.” He vowed to protect women and children from the violence of abortion.

“I wish the whole world could see abortion as I did as an uneducated, irreligious, high school dropout as something utterly unimaginable. That’s how I still see it, by the grace of God.”

From pro-life atheist to Catholic

Jones grew up in a vaguely anti-Catholic home. His grandfather was overtly anti-Catholic, accusing Catholics of saying one thing and doing another. The actions of his girlfriend’s father, who beat her and forced her to have an abortion, “was a scandal and just confirmed everything I’d been told about Catholics,” he said.

As Jones began to read and study various philosophers and Freud, he came to understand that the only real explanation of human worth, as the forefathers of the United States said was self-evident, was presented by Christian revelation. He started studying the Bible and came to believe the truth of Christianity.

He joined a pro-life Evangelical church but began reading about the early Catholic saints and doctors of the Church. He saw that even back then they were condemning abortion and contraception.

“It confirmed what only Catholics taught. But I didn’t want to be Catholic,” he admitted. He set out to prosecute the Church, but what was revealed to Him at every turn was the beauty of the Church.

“C.S. Lewis said that he was the most reluctant convert. I think I maybe beat him,” Jones laughed.

He finally came to the conclusion he either had to reject the Christian tenet of the dignity of human personhood or accept the truth of the Catholic Church.

Any lingering doubts he may have had disappeared “at the moment of my baptism and confirmation. I’m so grateful for the grace and privilege to be Catholic.”

Appleman shared the sad news that local abortions increased by 76% since the start of COVID-19. She noted that Whole Women’s Health Alliance is suing the state of Indiana, trying to repeal laws meant to protect women and their unborn children. She shared a link with attendees demanding that the lawsuit be dropped. The job of Right to Life Michiana and all pro-life supporters, she said, is to make abortion unthinkable and unnecessary.

The organization’s fundraising goal this year is $250,000 so that programs can be continued, including the sidewalk advocacy program, which Right to Life Michiana wants to double this year.

In conclusion of the interview, Jones called slavery and segregation, which is now abhorred, a part of the spirit of the age. The abortion culture is part of that. He said that while the defense of human personhood is found in the law, the courage to stand up for it is found in Christian movements.

“Holy Spirit is the only thing stronger than the spirit of the age,” he said.

Jones praised and thanked Right to Life Michiana for the work they do, and said it was a privilege to speak at the program and to be a small part of the event.