The Rite of Christian Initiation of Adults is a faith journey for those seeking full communion with the Catholic Church. “I always thought about it, but it never seemed to be the right time,” said Jessica Leffers. “All of a sudden, one day I felt ready,” she exclaimed recently.

Leffers is a catechumen, a non-Christian who is accepting religious instruction at St. Therese Parish, Fort Wayne, in preparation for receiving the sacraments of initiation — baptism, confirmation and Eucharist — and membership in the Catholic Church, at Easter.

“My family did not practice any sort of religion,” said Leffers. “I believed in God, but I did not attend church,” she related. 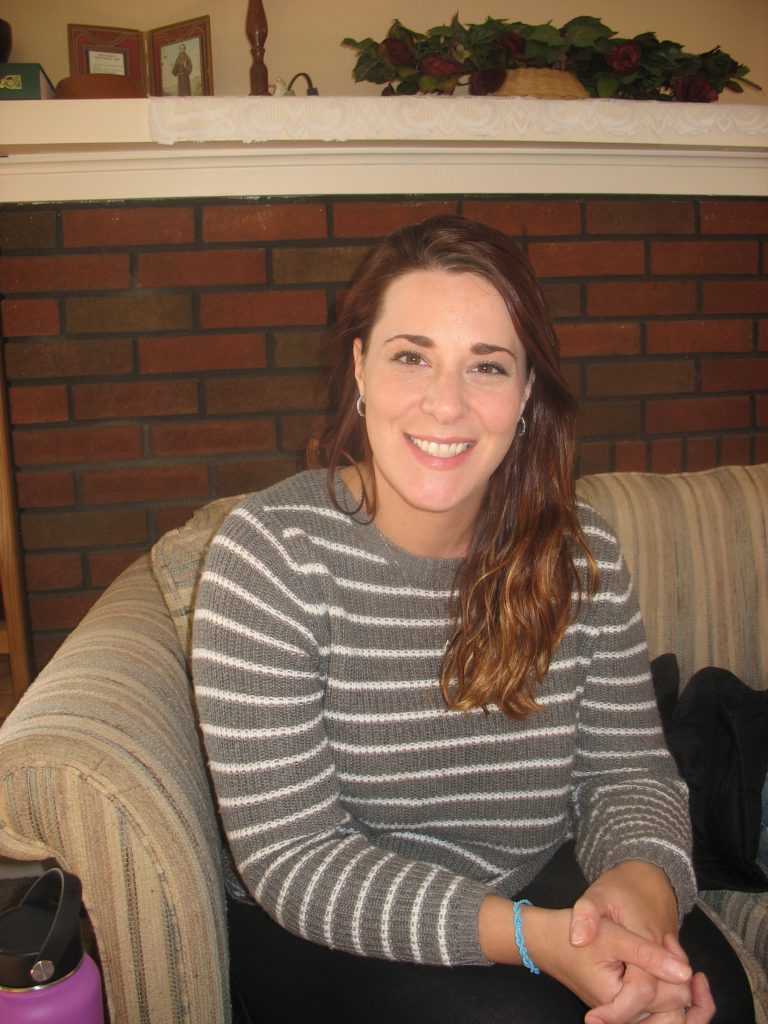 Jessica Leffers, Fort Wayne, attends RCIA sessions with her husband, Ryan, who is serving as her sponsor. She will receive the sacraments of initiation on March 31 at the Easter Vigil. — Vince LaBarbera

Born in Fort Wayne, she was raised by her paternal grandmother, Lucy Davis. “My parents were just young and dumb,” she said, “and it was just better for me to live with my grandmother growing up.” She has three brothers and a sister, but they did not grow up together.

Leffers said she had a few friends who were Catholic when she was growing up, and she heard their parents talking about the Church from time to time. “But I never formed a strong opinion favorably or unfavorably about the Catholic faith. All I knew of the Catholic Church was what I heard in the news, about the abuse scandals.”

She attended South Side High School and graduated from the University of Saint Francis in 2010 with a bachelor’s degree in nursing. She now works in labor and delivery at Dupont Hospital in Fort Wayne.

When Jessica began dating Ryan Leffers many years ago, she noticed how strong his parents, Steve and Karen Leffers, were in their Catholic faith. She also talked with Karen frequently, before she died in August 2016. “I know becoming Catholic was something Karen hoped I would choose to do. But I never felt pressured by anyone in Ryan’s family to become Catholic,” she said emphatically.

When Jessica and Ryan were married at St. Therese, Father David Ruppert, the pastor at the time, suggested she might think about becoming Catholic. “Joining the Church was something I had wanted to do for a while, but the time just was not right,” she said, “since I was still in school and then we had youngsters to raise.”

The couple has three children: Bryson, age 12, Hazel, 8, and Jules, 6. The family attends Mass every week and the children are enrolled in St. Therese School.

When Jessica decided to begin the RCIA process last year, Bryson’s teacher, Pam Lepley, said to her, “I understand you are going to become Catholic.” Jessica asked how she knew that already, since she had only made the decision the previous day. Lepley related that Bryson had excitedly told her, because it’s something he had been praying about for a long time.

Jessica said one of the things she is learning in the RCIA process is how the Biblical names she’s heard about for years tie together and fit with the stories. “Now when I hear our kids talking about what they’ve learned in religion class, it’s nice to finally know a little of what they’re talking about,” she related.

At the Rite of Acceptance last year, when Jessica made the decision to be baptized and enter the Catholic Church, Bryson served as the master of ceremonies, or MC, standing on the steps in front of the altar with Father Lawrence Teteh, CSSp, pastor of St. Therese. Father Teteh reportedly whispered to Bryson, “Look into your mother’s eyes!”

“I’m both a little nervous and excited thinking about the Easter Vigil on March 31,” concluded Jessica. Husband Ryan, her sponsor, and all the family are hoping Bryson will be able to serve as MC again on that special night. Jessica’s father-in-law, Steve, added: “And Karen surely will be smiling down from heaven.”