An encounter with the Lord.

Nothing is more inspiring, life-changing and transformative – and nothing unites the faithful with a more profound sense of community.

This personal encounter with Jesus Christ was the goal and mission of Revive, a city-wide night of worship, adoration and prayer held at Bishop Dwenger High School on March 9. Hundreds of people from Fort Wayne and beyond poured into the school gymnasium for the event, which was presented by Damascus Catholic Mission Campus. 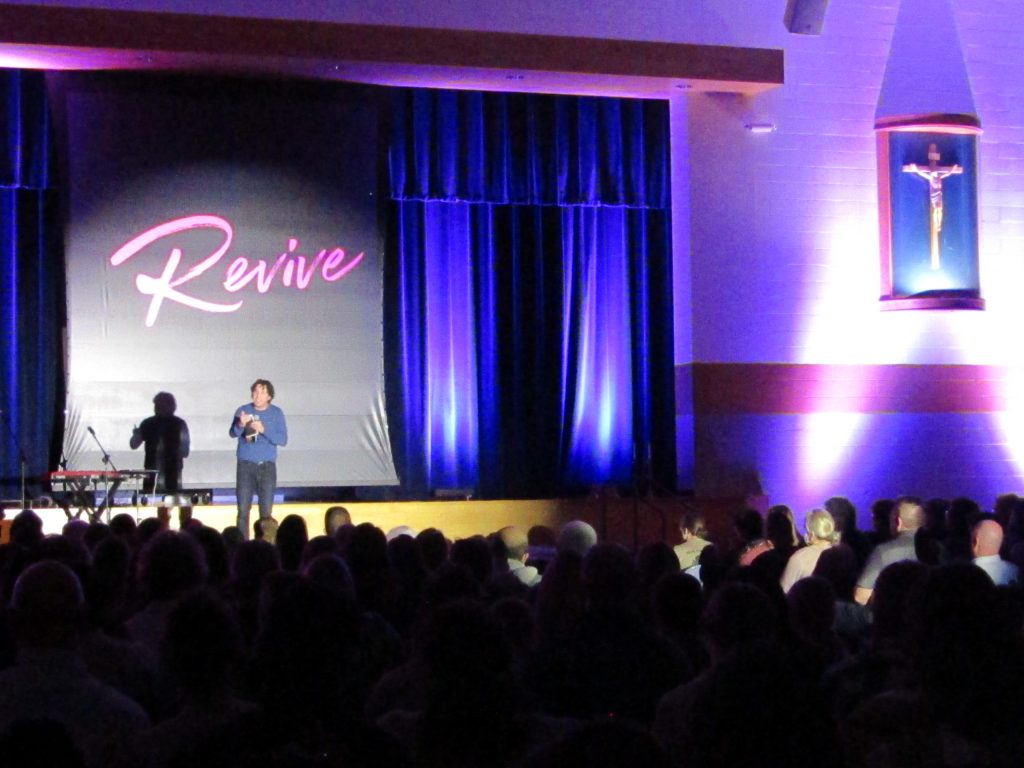 Hundreds of attendees listen as different Revive speakers discuss the beauty of the Catholic faith. Dan DeMatt, Damascus Executive Director, asked those present to let go of the burdens they carry.

Located in Centerburg, Ohio, Damascus formed more than 20 years ago as “a place of encounter where a generation is awakened, empowered and equipped to live the adventure of the Catholic faith.” What began as a youth summer camp soon grew into a year-round retreat center serving thousands of Catholic youths every year, and it is now forming adult missionaries who are bringing this message of renewal near and far.

While the Revive event at Bishop Dwenger was the first ever of its kind, it was the first of many for Damascus. The idea of a Revive tour was born out of a desire to bring the experience of their youth camps to surrounding communities with a hunger for the Lord, according to Damascus Outreach Associate Conall Hughes.

“What if everyone in the city was partaking together and it was uniting for a diocese?” said Hughes, describing the vision of the Revive tour. “Then people encounter Jesus, and they can bring that refreshed zeal, that newfound passion and that experience back to their parish and their schools and their communities.”

Father Thomas Zehr of St. Mary in Huntington and Father Jay Horning of St. Vincent de Paul in Fort Wayne were among those instrumental in bringing Revive to Bishop Dwenger. Both have been involved with Damascus summer camps in the past and were drawn to the group’s passion for the Lord. When he heard that Damascus was interested in bringing Revive to Fort Wayne, Father Zehr began coordinating with Bishop Dwenger, which he knew had the facilities and the staff to accommodate the event.

“They [Damascus] came with an initial dream of just pouring into Fort Wayne because they saw there was just so much potential,” said Father Zehr. “And because it was new, we were all just open to how the Lord was going to work.” Zehr said the Lord’s work was apparent through six months of planning between Damascus and a team from the Diocese of Fort Wayne-South Bend.

The event began with a welcome and worship music, which was led throughout the night by the Damascus Worship Collective. Dan DeMatte, Damascus Executive Director of Missions and Advancement, then delivered the first of two messages of the night. DeMatte beckoned those in attendance to allow Jesus to free them of whatever is weighing them down. Jesus’ victory over death, he said, was also a victory over everything that death brings about, such as shame, anxiety or fear. Once we have laid claim to this freedom that Christ has won for us, we can truly encounter the Lord and allow Him to transform our lives.

This encounter is never more real than in the Blessed Sacrament – the very body of Christ. DeMatte introduced a period of Eucharistic Adoration by articulating a striking reality to the crowd.

“The God of Heaven is in this gymnasium tonight in Fort Wayne, Indiana,” DeMatte said. “That’s what it means to say, ‘The Kingdom of God is at hand.’”

Father Zehr processed to the front of the gym with the monstrance as the Damascus worship team encouraged anyone who felt called to move closer to adore Jesus. Dozens of attendees, many of them youths and young adults, walked forward and knelt or laid in front of the Blessed Sacrament, drawn to the presence of their Lord and Savior. For half an hour, the gymnasium was transformed into a sea of love and praise, before Father Zehr concluded Eucharistic Adoration. 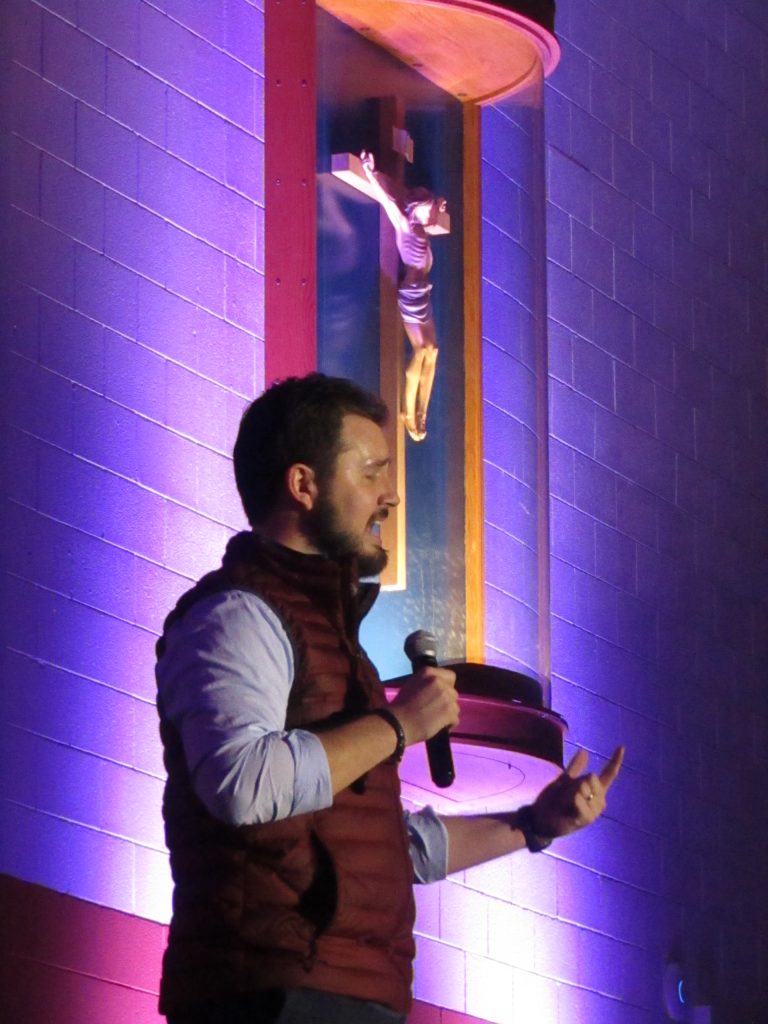 Brad Pierron, Damascus Missionary Program Director, expresses how the mission of Jesus has been passed down to all Christians.

Brad Pierron, Damascus Missionary Program Director, next shared a message on mission. He explained that the mission of Jesus – to seek and to save what was lost – is now our mission. If we want to carry this out and do something great with our lives, Pierron said, we must stop doing what everyone else is doing. By becoming more of Jesus every day, we will in turn become more of ourselves and be able to offer our individual gifts to the Lord.

“When the Father looks at you tonight, He looks into your chair and He sees a unique, specific, and unrepeatable image of His Son,” Pierron said. “That’s what He sees. And He loves it when that comes to life. There’s that gift that I only put in you, there’s that aspect of my Son that I only put in you. And why do I love nights like tonight? I get to see that in you.”

Pierron wasn’t the only one who recognized the fruitfulness of the night of encounter. As the event concluded with a prayer ministry, in which Damascus missionaries and volunteers prayed over attendees young and old, an air of hope was evident throughout the crowd. 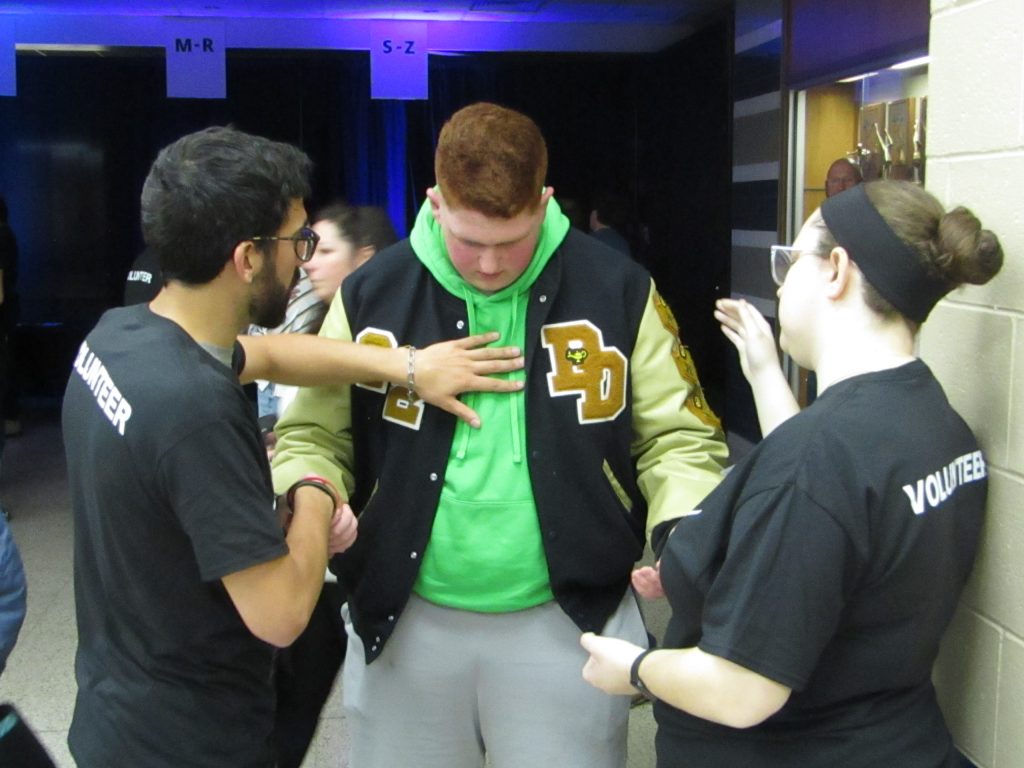 Two Revive volunteers pray over a Bishop Dwenger student who attended the event.

“The people here – they gave me hope, they gave me energy,” explained David Go, 15. “I grew up at a Catholic private school, and it’s like reliving my childhood, but better. I just love it here. I feel like I belong here.”

Karen Ewing, whose child was among those who moved to be closer to Jesus during Adoration, expressed the same sentiments.

“I have so much more hope in the youth. To see all the youth walk up there during Adoration, it was such a gift. That just brought tears to me,” said Ewing. “It was a very humbling moment as a parent just to witness that.”

Father Zehr said he envisions this experience of encounter will breathe life into the Church in Fort Wayne. 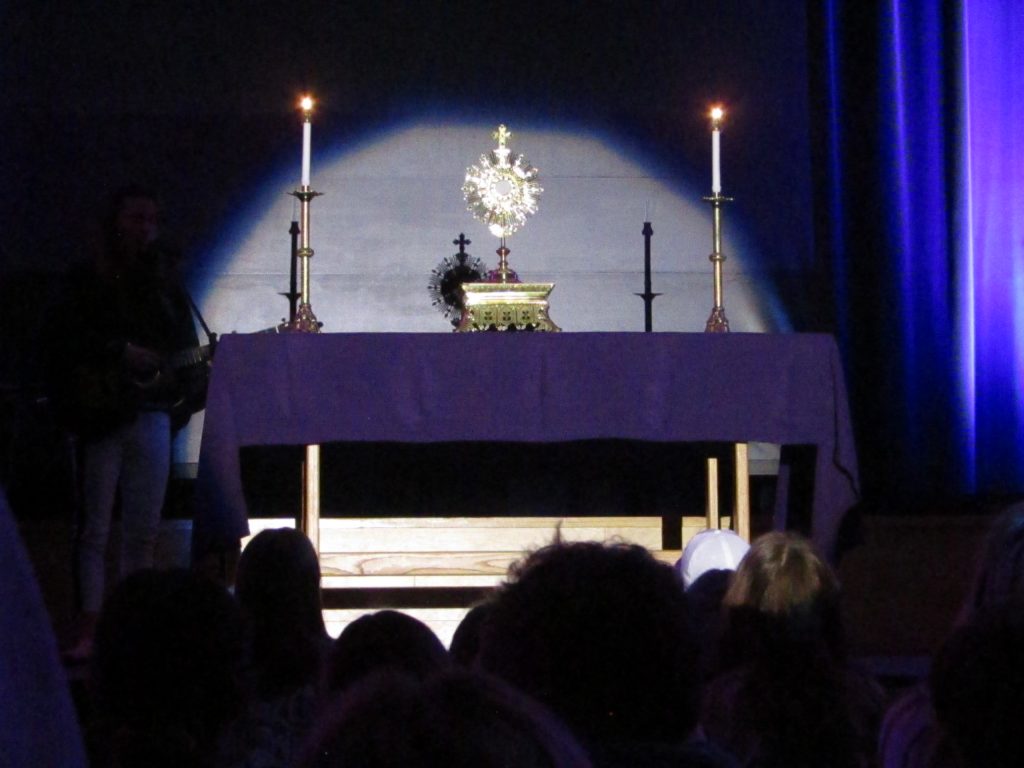 Photos by Eric Peat
People of all ages join in the March 9 Revive conference at Bishop Dwenger High School in Fort Wayne, hosted by Damascus Catholic Mission Campus out of Centerburg, Ohio. Part of the evening includes adoration of the Blessed Sacrament in the school gymnasium, accompanied by praise and worship music.

“There are so many people who are involved in a lot of things and love the Church and love our Lord,” said Father Zehr. “But if we took all those people that are on level two or level three and bring them to level nine, and we could really light them on fire with a real renewed passion and zeal for the Lord…then we can just go deeper. The Lord’s already set them on fire and kind of primed their hearts. Now’s the time to run. Let’s actually pour new life into this city.”