WASHINGTON (CNS) — The Rev. Billy Graham was “a preacher of God’s word not only in his sermons, but also in the very life he lived,” said Cardinal Daniel N. DiNardo of Galveston-Houston, president of the U.S. Conference of Catholic Bishops.

“Today, we pray for the soul of the Rev. Billy Graham to the Lord he so dearly loved and offer our condolences to his family,” the cardinal said in a statement about the Feb. 21 death of the world-famous Baptist preacher.

“His faith and integrity invited countless thousands around the world into a closer relationship with our Lord and Savior Jesus Christ. Thanks be to God for the ministry of Billy Graham,” Cardinal DiNardo said. 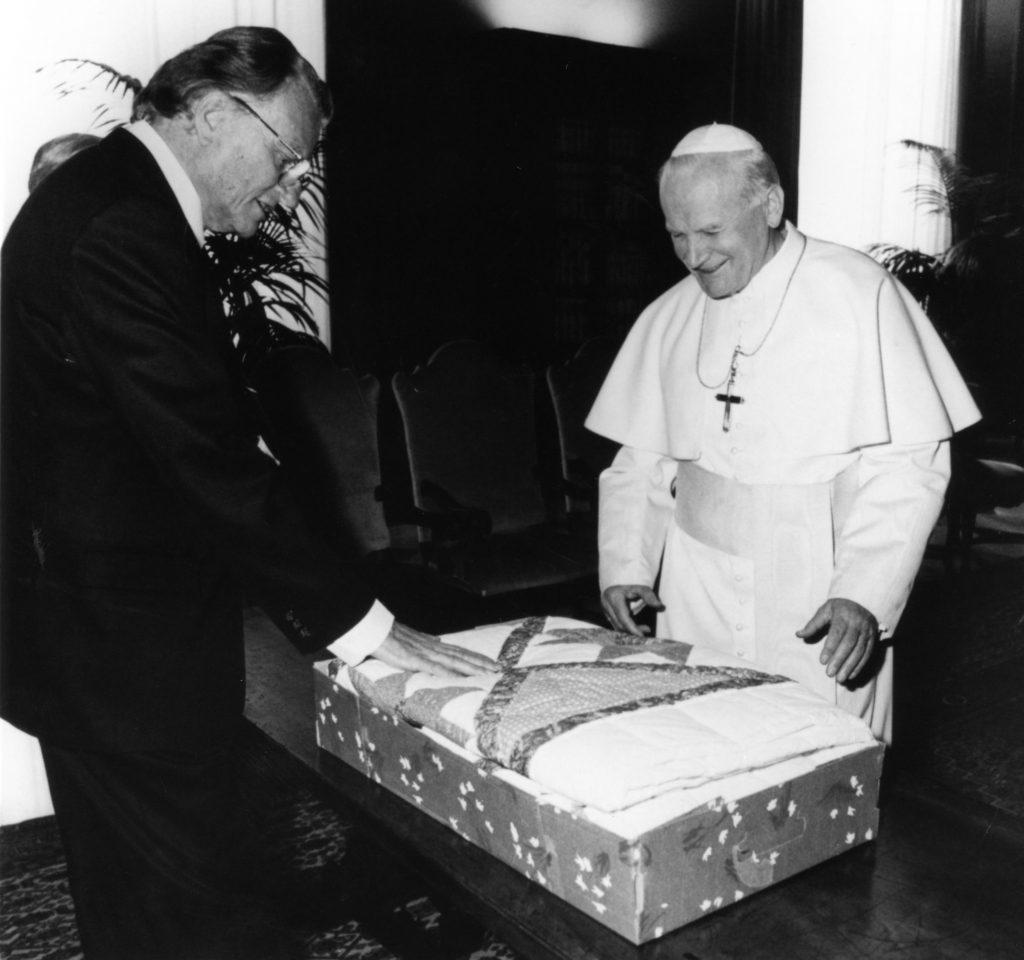 The Rev. Billy Graham and St. John Paul II are seen at the Vatican in 1990. Graham, best known for his televised evangelism broadcasts, died Feb. 21 at his home in North Carolina at age 99. (CNS files)

An outpouring of statements paid tribute to the man who was easily the most famous evangelist of the 20th century. Born in Charlotte, North Carolina, Rev. Graham died at his home in Montreat, North Carolina, at age 99.

He had suffered from Parkinson’s disease for many years, although he continued to lead crusades until 2005, when he held his last one in New York. In recent years, he also suffered from cancer, pneumonia and other ailments.

He preached the Gospel in person to more people than any other evangelist in history. He reached at least 210 million not only through his personal appearances but also through his radio and television ministries.

A Catholic bishop in North Carolina — and a fellow Charlotte native — said Rev. Graham “gave us an inspiring example of a life lived in total dedication to Jesus Christ and his Gospel.”

“Through his ministry, he taught the world that Jesus is the way and the truth and the life. May the Father of mercies now receive Dr. Graham into his loving embrace. The condolences and prayers of the Catholic Church are with the Graham family at this time,” said Bishop Peter J. Jugis of Charlotte.

In neighboring Tennessee, Knoxville Bishop Richard F. Stika recalled meeting Rev. Graham in 1999 during his visit to St. Louis as he was preparing for one of his famous crusades to be held there. That same year, then-Msgr. Stika, a priest of the St. Louis archdiocese, was archdiocesan coordinator for the visit of St. John Paul II to St. Louis.

“I found him to be a very authentic and humble preacher of the Gospel,” Bishop Stika said of the preacher. “During his meeting with then-Archbishop Justin Rigali (of St. Louis), Dr. Graham expressed his immense admiration and respect for Pope John Paul II. Dr. Graham is sorely missed in our nation today and as in so many ways we as a nation have lost our moral bearing. May he now rest in peace.”

Cardinal Rigali, now retired and residing in the Diocese of Knoxville, said he remembers the Rev. Graham from that same meeting in St. Louis.

“When I heard the news this morning about the death of Dr. Billy Graham, it brought back memories of the encounter I had with him some years ago in St. Louis with Bishop Stika,” he said in a statement. “Something that stands out in the life and ministry of Dr. Graham is this wonderful admiration and love that he had for the person of Jesus Christ. He was always speaking about Christ and always speaking about who he is. He is the Son of God and we are destined to eternal life together with him.”

The cardinal remarked that it was encouraging to see how much attention the media was giving to Rev. Graham and “reflecting on his long life.” The prelate added: “He has brought the message of Jesus to so many people and I am impressed by his personal piety, by his personal zeal and by his love for our Savior Jesus Christ.”

New York Cardinal Timothy M. Dolan recalled that when he was growing up in the 1950s and 1960s, “it was hard not to notice and be impressed by the Rev. Billy Graham.”

“There was no question that the Dolans were a Catholic family, firm in our faith, but in our household, there was always respect and admiration for Billy Graham and the work he was doing to bring people to God,” Cardinal Dolan said. “Whether it was one of his famous crusades, radio programs, television specials, or meeting and counseling the presidents, Billy Graham seemed to be everywhere, always with the same message: Jesus is your Savior, and wants you to be happy with him forever.”

He said his admiration “only grew” as he studied “our nation’s religious past. (I) came to appreciate even more the tremendous role he played in the American evangelical movement.”

The chairman of the USCCB’s Committee on Ecumenical and Interreligious Affairs said that “in a particular way, Catholics feel the loss of one of the greatest pastors of our time.”

“His ecumenical approach in ministry helped to forge bonds of friendship and understanding between Catholics and Protestants. He reminded us that what we had in common in Christ was greater than what divided us,” said Bishop Joseph C. Bambera of Scranton, Pennsylvania.

“Headlines today will describe Billy Graham as the preacher to millions and the adviser of presidents but first and foremost, he was a man of deep Christian faith,” the bishop added. “Committed to the Gospel, his personal witness and preaching of Jesus Christ touched the hearts of Americans spanning many generations.”