TUCSON, Ariz. (CNS) -— Retired Bishop Francis A. Quinn of Sacramento, California, who headed the Northern California diocese from 1980 to 1994 and later spent 13 years ministering to Native Americans in the Diocese of Tucson, died March 21 at age 97.

Vespers and a rosary will take place the evening of March 31. His funeral Mass will be celebrated at noon April 1. All services will be at the Cathedral of the Blessed Sacrament in downtown Sacramento. 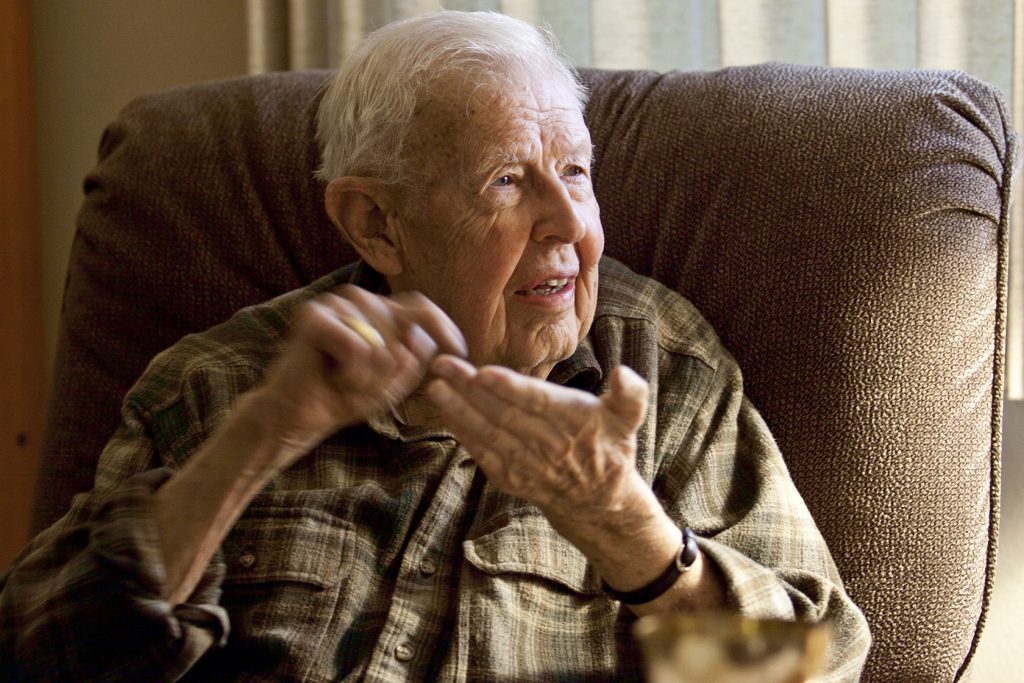 The seventh bishop to head the Diocese of Sacramento, he was a much beloved figure in the Sacramento community.

“Bishop Quinn, at the time of his death, was the oldest Catholic bishop in the United States. A status he enjoyed sharing with the many who visited him,” Bishop Jaime Soto of Sacramento said in a March 22 statement. “In his quieter moments though, Bishop Quinn was ready and eager to meet the Good Shepherd whom he had served faithfully during his 73 years as a priest, 41 of which as bishop.”

“As he approached the divine threshold,” he said, “Bishop Quinn’s heart resonated with the words of Paul to the Philippians: ‘It is not that I have already taken hold of it or have already attained perfect maturity, but I continue my pursuit in hope that I may possess it, since I have indeed been taken possession of by Christ Jesus.’”

Many admired and loved Bishop Quinn, “Catholics and non-Catholics alike,” Bishop Soto said. “He was always accompanied by friends and family throughout his long stay at Mercy McMahon (an assisted living residence). I am grateful to all those who were his companions during the final part of his sojourn.

“Let us continue to accompany him with our prayers. Eternal rest grant unto him, O Lord. May perpetual light shine upon him.”

Francis Anthony Quinn was born Sept. 11, 1921, in Los Angeles. He attended St. Joseph Seminary in the Archdiocese of San Francisco, where he was ordained a priest June 15, 1946. He earned a master’s in education from The Catholic University of America in 1947 and a doctorate in education from the University of California- Berkeley in 1962.

He taught in archdiocesan high schools until becoming assistant superintendent of Catholic schools in 1955. From 1962 to 1972, he was editor of the archdiocesan newspaper, the San Francisco Monitor.

Pope Paul VI appointed him as an auxiliary bishop for the archdiocese, and he was consecrated on June 29, 1978. Bishop Quinn was appointed by St. John Paul II to Sacramento and was installed there in 1980.

While Bishop Quinn served 13 years as Sacramento’s bishop, he made national news for his advocacy on behalf of the poor. He was known for giving money to the homeless, serving meals and washing dishes in a soup kitchen and visiting migrant labor camps in the summer.

A member of the Catholic peace movement Pax Christi, he called for nuclear disarmament before the U.S. bishops issued their pastoral letter, “The Challenge of Peace.” He helped spearhead a civic ecumenical partnership to build 1,000 homes for Sacramento’s homeless population.

“When he speaks for the poor and the homeless, he speaks with the authority of a bishop who ordered the sale of the church mansion and moved into the maid’s quarters in the basement” of the cathedral rectory, said a Bee editorial.

Throughout his tenure, he also supported school choice legislation and support for Catholic Relief Services, the U.S. bishops’ overseas relief and development agency.

He often invited faith leaders from other denominations to services at the Cathedral of the Blessed Sacrament, including a joint baptism on Pentecost in 1989, and in 2000 delivered a benchmark address outlining “Beatitudes for an Ecumenical Era.” He also issued in 1991 a new “Beatitudes for Elected Officials.”

He retired in 1993, and the priests of the diocese game him a recreational vehicle as a retirement gift.

He retired at age 73, two years before the age canon requires bishops to turn in their resignation to the pope. He was in good health and said his reason for early retirement was that “I’ve done all the things I can think of.”

A year later, he moved to Arizona to minister to the Yaquis and the Tohono O’odham in the San Solano Missions.

“A vocation is not a profession from which you retire,” he said in 1994. “A vocation never ends.”

Even in retirement he maintained a simple lifestyle, living in a trailer behind the residence of Tucson’s bishop.

In 1999, he was one of eight bishops who signed a petition published in The New York Times calling for international debt relief in line with Pope John Paul II’s designation of the year 2000 as a jubilee year.

In 2003, he underwent quadruple bypass surgery after serious coronary blockages were discovered following a routine angiogram.

In 2007, he stepped away from active ministry and returned to Sacramento. On that occasion, Bishop Gerald F. Kicanas, then head of the Tucson diocese, wrote: “What a blessing his presence has been! He is beloved among the people he served with such dedication and commitment, especially the people of the Pascua Yaqui Nation. … I know all of us feel profound respect for Bishop Quinn and cherish his gentle, loving and unassuming manner. He is a deeply spiritual man who has left a permanent impact on all of us.”

Bishop Quinn still was not done in the public spotlight. In 2015, at age 93, he became a first-time author, penning a “fictional memoir” called “Behind Closed Doors: Conflicts in Today’s Church.” He wrote the book during his first six years in Arizona. Proceeds from sales benefited a facility for the homeless, newly released prisoners and those just out of drug rehabilitation.

He retired to Mercy McMahon Terrace, a residence run by the Sisters of Mercy for seniors in Sacramento.

Bishop Quinn is survived by his sister-in-law, Betty Quinn, two nieces and numerous grandnephews and grandnieces and their families.

Michael Brown is managing editor of Catholic Outlook, newspaper of the Diocese of Tucson.