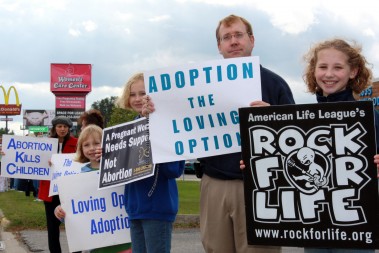 Rob Fox and his wife Debbie, not pictured, are the parents of six children, including two with special needs. They were horrified when a doctor advised them to abort their youngest child because she was expected to be born with severe health problems, if she was born at all. After much prayer and intercession, the Fox’s were blessed with a healthy daughter. The doctor had no explanation as to how the baby survived her dire prognosis. Rob, pictured here with daughters Lauren, Samantha and Kaelyn, says his family prays together and regularly participates in the Life Chain and other pro-life events. “We come to get the message out that we need to fight for life,” he explained. “We need to get the message out to as many people as we can, and to pray for them.”

Men, women and children held signs promoting the culture of life. Many of those people clutched their rosaries as well, recognizing the power of prayer when it comes to converting people’s hearts.
“The one thing we can offer these babies is prayer,” explained Pat Sweeney, a parishioner from Mishawaka’s St. Bavo Parish, taking part in her first Life Chain. “When we’re faced with life challenges, follow the example of Mary. She said ‘yes’ and it wasn’t easy, but it was worth it all.”
Tom Gill, president of St. Joe County Right to Life and parishioner at Corpus Christi Parish in South Bend, said the Life Chain is not only a chance for people to talk with other pro-lifers, but to pray together about the issue. He says the Life Chain ties in well with another prayerful event, the 40 Days for Life vigil, currently underway.

“At St. Joseph County Right to Life, prayer has always been the most important thing we do,” said Gill. “We do advocacy work and we also do education, and while that may take up most of our time, if we didn’t have prayer, those things wouldn’t be effective. It’s really prayer that makes it all work. It’s a combination of everything, but without prayer, nothing happens.”

Many Life Chain participants headed to Marian High School for the 40 Days for Life Mid-Way Rally. Organized by Serra Club President Dick Dornbos and moderated by WHME-TV’s Chuck Freeby, the rally featured a video and music from Marian High School students. Those were followed by a variety of talks that covered everything from the early feminist movement being inherently pro-life to the very real showdown we have with Satan.

“Scripture says there is nothing new under the sun,” reminded Father Bob Lengerich, associate pastor at St. Pius X Parish in Granger. “The battle we are fighting in these 40 Days for Life is the same battle that has been raging ever since Satan was expelled.”

Father Lengerich reminded the crowd our Catholic faith gives us hope. He said despite the devil trying to take as many souls with him to hell, Jesus has a plan.

“Most of all, Satan envies Mary and all women,” continued Father Lengerich, “because God gave these blessed creatures something Satan will never have. … First, a spirit of humility. Second, the power of love. And if you combine those, the ability to bring new life into the world. The devil can never do that. And so in his envy, he vowed, ‘If I can’t have these gifts, no one can have these gifts!’ And he’s been attacking life ever since Adam and Eve … but he will not prevail!”
Unveiling a large portrait of Our Lady of Guadalupe, Father Lengerich said we need look no farther than to Mary, the mother of Our Lord.

He said, “She unites all things in herself. She brings us life through her Son. (After she appeared to Mexican peasant, St. Juan Diego in 1531) The Aztecs stopped sacrificing their children immediately, and pretty much overnight, 15 million of them converted to the true faith of Christianity.”

Other speakers featured at the rally included co-directors of the Office of Family Life, Fred and Lisa Everett. They addressed the judicial system and the history of the feminist movement with its inherently pro-life roots. Dr. Laura McGuire, M.D., a member of the Catholic Medical Association, discussed the scientific evidence of life beginning at conception and the role media plays in distorting the truth. Dr. David Solomon, PhD, associate professor of philosophy at the University of Notre Dame, took on the idea of a middle ground on the abortion issue. A few months removed from the controversy surrounding Notre Dame’s invitation and honoring of President Barack Obama, Dr. Solomon explained why there is no such thing as a “middle ground.”

Local organizers for 40 Days for Life hope to post text from all the talks given on their Web site at www.40daysforlife.com/southbend.