WASHINGTON (CNS) — Hurricane Maria was a body blow to Puerto Rico in 2017, one from which it has yet to fully recover.

Then came the series of 5-magnitude-and-higher earthquakes that began Dec. 29 — topped off by three such temblors in a 30-minute span Jan. 7 and followed by a magnitude 5.9 quake Jan. 11 — that has resulted in only two confirmed deaths, but untold losses in property damage. And not only the earthquakes, but their many aftershocks.

Archbishop Roberto Gonzalez Nieves of San Juan lives on the northern part of the island, which was spared most of the worst effects of the quakes. But on a Jan. 10 visit to the island’s southern region in the Diocese of Ponce — what he could see of it — the damage was much worse.

“I got around by car,” Archbishop Gonzalez said. “But I wasn’t able to go everywhere I wanted to because a bridge here or there collapsed.” 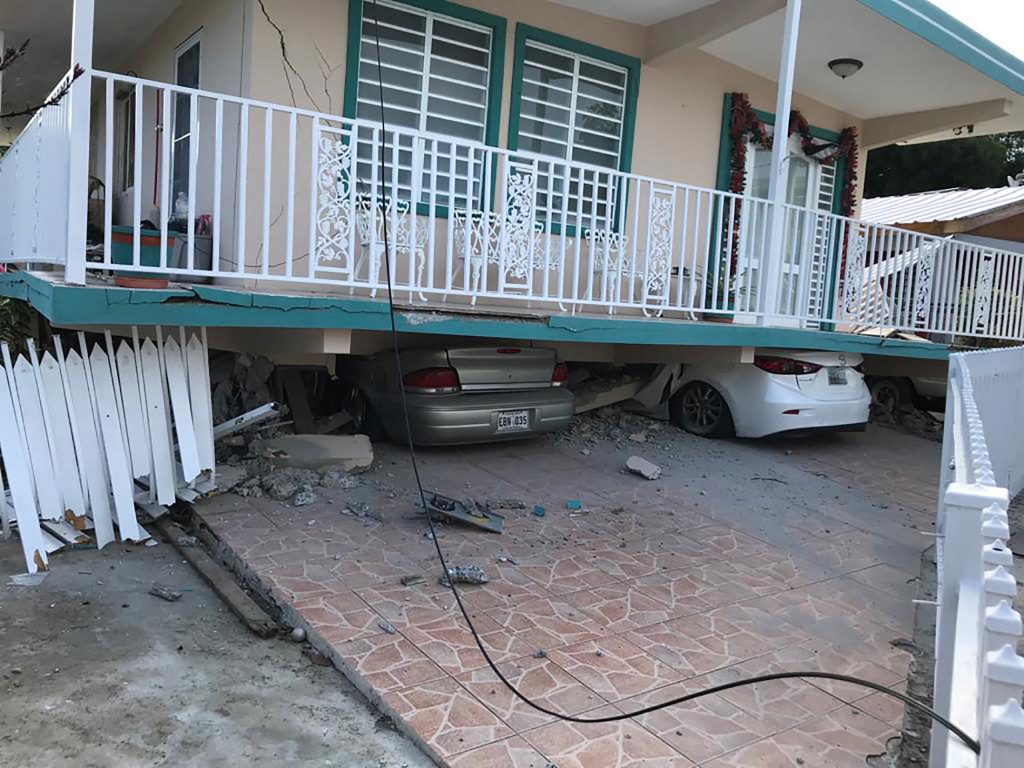 Cars lie under a collapsed house after an earthquake in Guanica, Puerto Rico, Jan. 6, 2020. A larger temblor of magnitude 6.4 rattled Puerto Rico before dawn Jan. 7, killing at least one person and destroying a Catholic church. A series of earthquakes and aftershocks beneath the southern part of the island have been occurring since the night of Dec. 28-29. (CNS photo/Ricardo Ortiz, Reuters)

Driving around Ponce, the archbishop told Catholic News Service in a Jan. 10 telephone interview from near San Juan, “I saw a number of people In Ponce now with their suitcases and looking for a place to find shelter.”

Archbishop Gonzalez added, “I didn’t see many buildings that had collapsed, but you see buildings with pieces of cement, pieces of the roof that have fallen off. It will take a while for structural engineers to make an assessment. The cathedral has bene quite damaged. I say it might take a year or two to fix the cathedral.”

People are sleeping in tents and spending most of their waking hours outside, he noted, fearing an aftershock might cause more of their homes to crumble.

Complicating people’s quest to find shelter is the weather. It has been raining on the island. Archbishop Gonzalez, during the interview, said it was raining heavily, and that the quake also has affected telephone and internet service on Puerto Rico.

Another fear is people not knowing where their next meal is coming from.

“There are many people without food,” Archbishop Gonzalez told CNS. He mentioned one district where “there are at least 400 people homeless. Caritas has been doing their best to provide them with food. Yesterday (Jan. 9) we purchased $150,000 for our Catholic Charities for that group of 400 or so.” 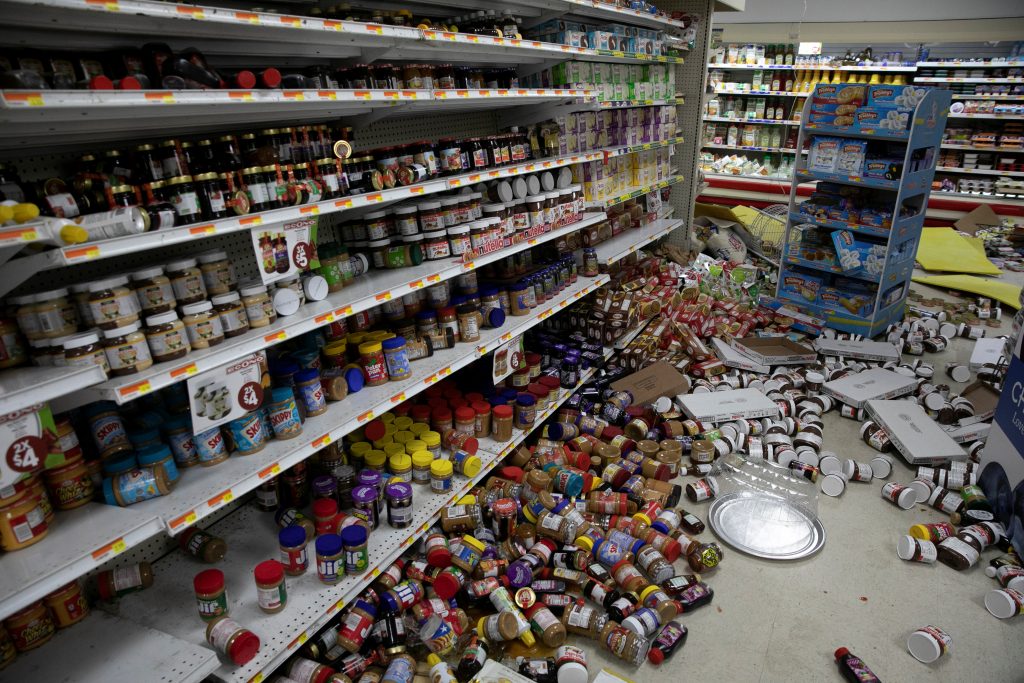 Grocery items are seen on the floor of a market Jan. 8, 2020, following an earthquake in Guanica, Puerto Rico. Archbishop Jose H. Gomez of Los Angeles, president of the U.S. Conference of Catholic Bishops, offered “my prayerful solidarity” to the people of Puerto Rico in a Jan. 7 statement, after a series of earthquakes killed at least one person and destroyed one Catholic church. (CNS photo/Marco Bello, Reuters)

“Every day there have been réplicas” — the Spanish word for aftershocks. “Those réplicas continue to affect the structure of buildings. In the building, it has a number of people. You come to this building, and it’s traumatic. One becomes afraid — what’s going to happen next?”

Archbishop Gonzalez disclosed something that perhaps few non-Puerto Ricans know: “The island shakes every day. We’re in a seismic area that’s very active — as active as California. but only shakes 2 points or 3 points (of magnitude), and you become accustomed to that and you don’t feel it. I remember as a child there were maybe two or three significant quakes, but I’d never felt anything like this. It is quite a jolt. It affects everyone emotionally.”

He recalled one morning receiving a call from a priest in Guanica, on the south side of the island. “I’m in the north, in San Juan, but they needed volunteers to organize the distribution of food from large trucks that had come from Caritas, from Catholic Charities. He asked if I would make calls to get volunteers. I spent an hour, an hour and a half, making calls. I had 100 volunteers going across the island to the town of Guanica to give help. It shows the spirit of solidarity, and the goodness among the people. It’s very touching.”

For people on the U.S. mainland, “first of all, we appreciate your spiritual solidarity and prayers, your awareness, your concern,” Archbishop Gonzalez said. “Secondly, if you are able to make monetary donations to assist in the relief effort — I’m speaking mainly of food and shelter — that would be a big help.”