An upcoming requiem prayer service and concert at St. Vincent de Paul Church, Elkhart, will have personal meaning not only to organizer and director of sacred music Brad Todorovich, but also to members of the community choir that will perform it.

Todorovich lost his father on Oct. 25, 2018, after a long illness. He said one of the reasons he wanted to stage the performance was as a tribute to his father; and maybe, he admits, “as a way to grieve.”

His father taught him a lot about music. Both his father and grandfather were part-time musicians, played organ and were members of their church choirs.

“They definitely inspired my career in church music. I figured it was a good thing to specialize in, as I’ve been surrounded by church music all my life and actively participated since I was 10,” he said. Todorovich has been at St. Vincent de Paul Parish for five years and was at Queen of Peace Parish in Mishawaka prior to that, for about four and a half years.

For the Nov. 4 requiem service he has assembled an advanced choir of about 40 vocalists from multiple parishes, churches and schools: St. Vincent; Queen of Peace; St. Joseph and St. Monica, Mishawaka; St. Thomas the Apostle, Elkhart; Trinity Lutheran Church, Elkhart; St. John the Evangelist, Goshen; St. Mary of the Annunciation, Bristol; St. Anthony de Padua, South Bend; the University of Notre Dame and Holy Cross College. The choir will be accompanied by a violist, string quartet and organist. The members have been practicing since early September.

Composer Gabriel Fauré was born in France in 1845. His musical talent was recognized at an early age and he studied organ, piano and choral music at the Niedermeyer School in Paris. After graduation from high school he worked as an organist and choirmaster at a series of churches of increasing prestige and taught composition. He began sketches for a requiem in 1887, reportedly not because of the death of a loved one. 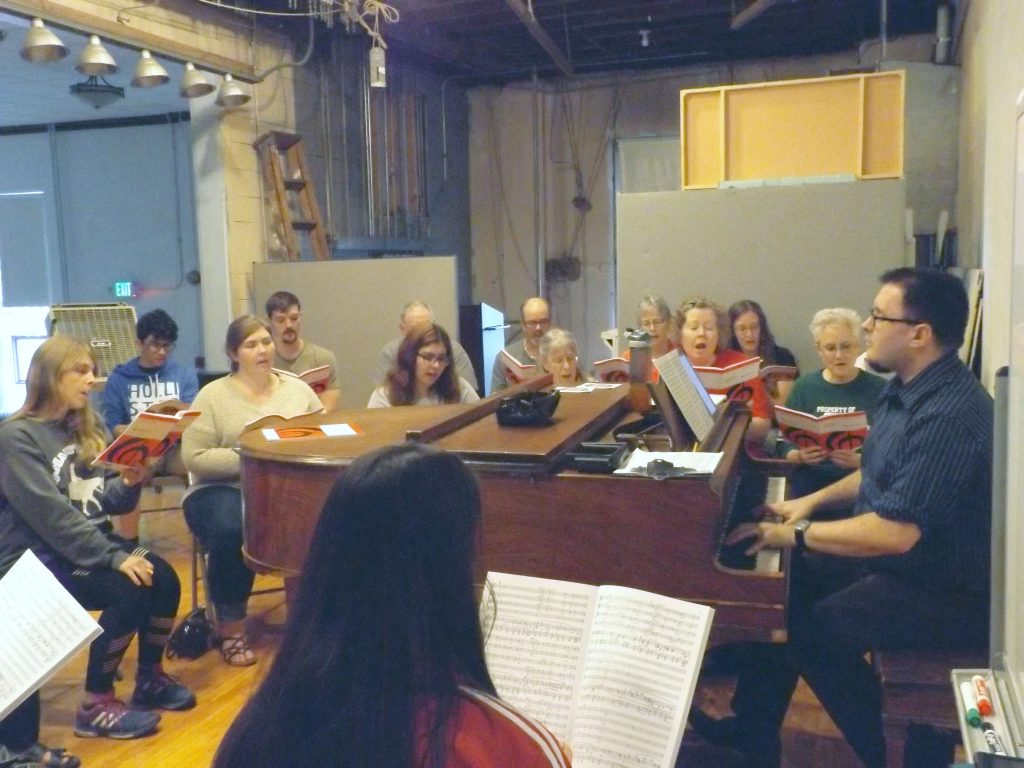 Brad Todorovich, far right, director of sacred music at St. Vincent de Paul Parish, Elkhart, accompanies a rehearsal for the prayer service and concert. The group has been practicing since September. — Denise Fedorow

By the time of the first performance in 1888 there were five movements to the work: an “Introit and Kyrie,” the “Sanctus,” “Pie Jesu,” “Agnus Dei” and In “Paradisum.” To perform the work, Fauré called for a mixed choir of tenors and basses, a soprano soloist, an orchestra of low strings (violas, cellos and double basses), harp, timpani, organ and a violin solo in the “Sanctus.” He added an “Offertoire” in 1889 and included a setting of “Libera Me” that he had written for baritone and organ 12 years earlier. He also added horns, trumpets and trombones to the orchestra, as well as a baritone soloist. This version was first performed at the Madeleine in January, 1893.

Fauré’s publisher reportedly wanted a larger-scale work, which led to a final revision that premiered in July 1900. In this version, the one most commonly heard in concert, woodwinds were added to the orchestra.

In a 1902 interview, Fauré was quoted as saying that he saw death “as a happy deliverance, an aspiration towards happiness above, rather than as a painful experience.” For this reason his requiem is more subdued than other similar works. Todorovich said Fauré’s work is “said to be very popular work for choirs and orchestras.”

Even though the performance will take place after All Souls’ Day, Todorovich said it can be done anytime because it is part of the Office of the Dead that is prayed as part of the Liturgy of the Hours.

“Any day you can say a funeral you can do the prayers for the dead instead of the morning prayer.”

Todorovich, who has a master’s degree in sacred music from Notre Dame, said the music itself is “very religious — more imbued with sacredness and prayer — nothing theatrical or overblown” unlike a lot of the music of its time. 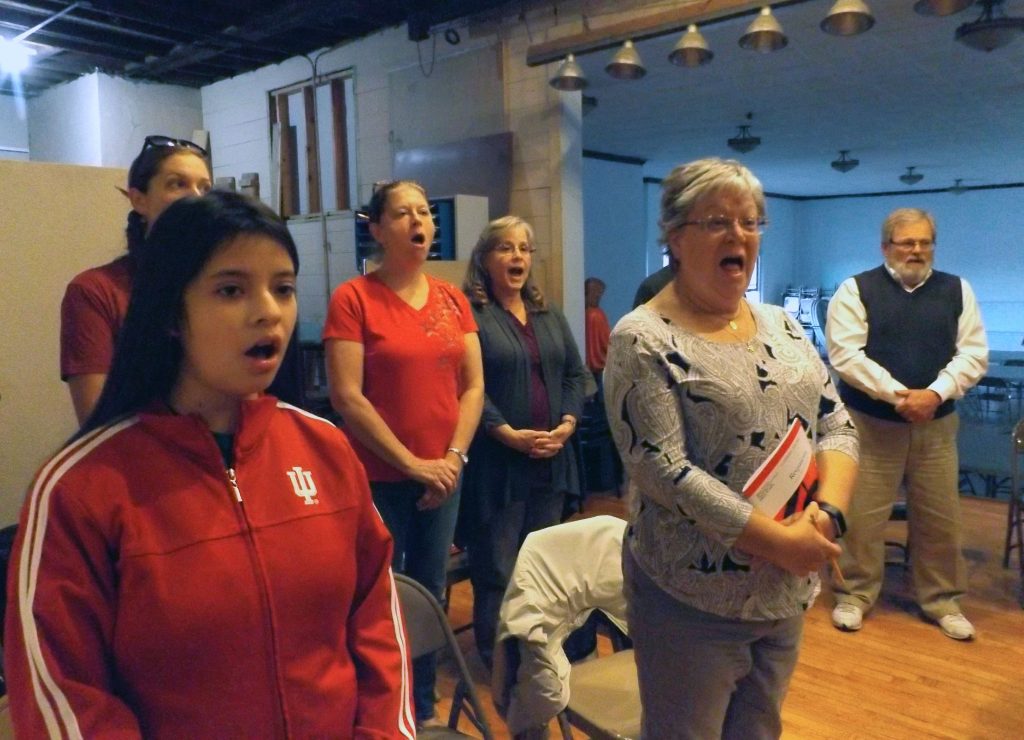 Several members of a combined choir rehearse for a requiem service and concert that will take place Nov. 4 at St. Vincent de Paul Church in Elkhart. — Denise Fedorow

Remembering the souls in purgatory

At a recent choir practice, several members of the choir said they chose to participate because they wanted to offer a tribute to loved ones.

“I like to sing, but this is a greater challenge,” said Ed Hruby of St. Mary. “We’ve all suffered loss, and I do think of all those people while we’re doing this. It’s a prayer.”

Lynn Nelson of St. Vincent said she’s a “relatively new Catholic,” “so this gives me an opportunity to give back and to use my gift to the glory of God.” She added that she’s also enjoying meeting new people.

Joe Fortner of St. Vincent said that while Todorovich was dedicating the performance to his father, “I’m dedicating it to my mother, father and brother.” Fortner also is dedicating the concert to friends in the church who have lost loved ones. “It means a lot,” he said. “I’m very honored he chose me to be part of this.” It’s also helping him get better acquainted with Latin.

“All of us have to do a better job of remembering the souls in purgatory, and I was thinking of my deceased family members — I hope they’re in heaven, but maybe they’re still in purgatory,” said St. Monica parishioner Beth Horbman. “Wasn’t it St. Augustine who said, ‘When you sing, you pray twice’? So this is double prayers for the souls.”

Queen of Peace parishioner Dale Seely said he “thoroughly loves the music for it — I have a record of it. I thought it would be a good opportunity. The music itself is very beautiful. We all know people who’ve passed away, so this is a chance to celebrate and remember.”