DUBUQUE, Iowa (CNS) – David and Gwen Bormann met in a creamery in 1971. Like aged cheese, the flavor of their love has gotten better over time.

To mark their 50th wedding anniversary on Feb. 12, the couple and all 12 of their children, who are also married, renewed their vows simultaneously at St. Columbkille Church in Dubuque during a Mass.

“None of this could have been possible without God in our lives,” reflected Gwen, now 69. “I can’t tell you how many times I’ve prayed to the Virgin Mary to intercede and ask Jesus to help us with our family and honestly, it works. And it will for anybody.”

At age 19, Gwen was a self-described “hippy” from Texas, who had lived in multiple states growing up due to her father’s job. She came rolling into the small town of Preston, Iowa, on a motorcycle with her friend. 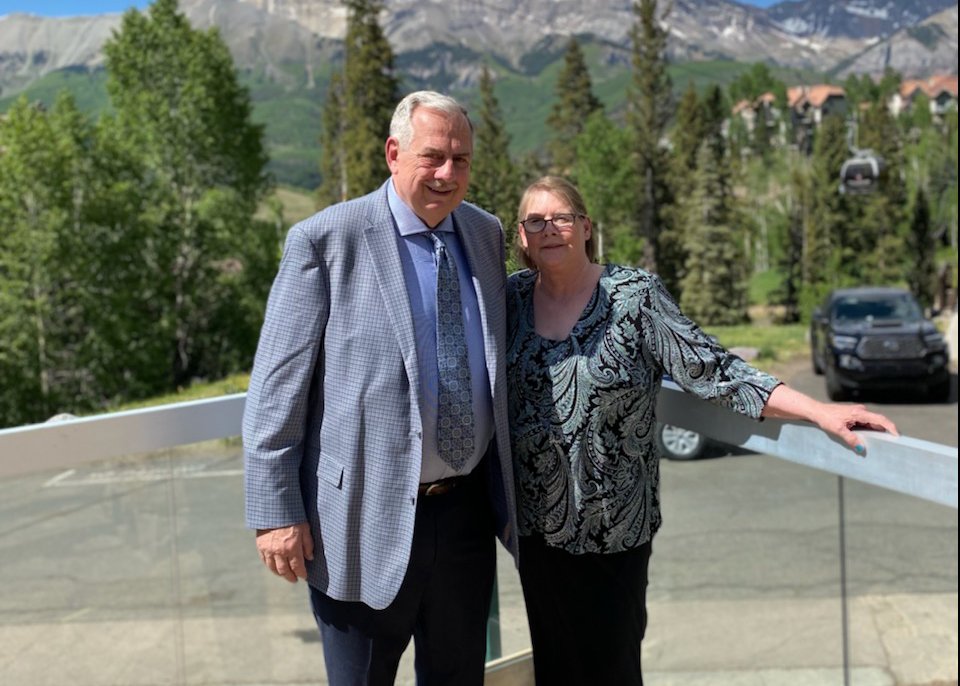 David and Gwen Bormann are seen in this undated photo. They planned to renew their vows after 50 years of marriage Feb. 12, 2022, in Dubuque, Iowa, with all 12 of their children and their spouses renewing their vows simultaneously. (CNS photo/courtesy Bormann family via Archdiocese of Dubuque)

The outspoken teenager was living in Dixon, Illinois, at the time, and traveled the distance of more than 60 miles because her associate was dating someone in Preston and wanted company. That’s where she first encountered David, 23, a quiet young man who had grown up on a nearby farm.

“It was early in the morning,” recalled Gwen. “I had to use the restroom. The only place open was the creamery where my husband worked. I asked him if I could come in and use the bathroom. When I came out, he asked me out.”

David remembers being drawn immediately to his future bride, who he thought was a bit of a “rebel.”

“Girls didn’t ride motorcycles back then,” he reflected. “She said, ‘Would you stand guard outside the bathroom?’ She was the most honest, sincere person I ever met. As a matter of fact on our first date, I told her, ‘I’m going to marry you someday.’”

Gwen was attracted to David’s solid nature and his deep Catholic faith. Raised Baptist, she decided to join the Catholic Church to give “more stability” to their future family. Over time, however, she came to appreciate the teachings of the Church on her own terms and became an active member.

“I believed in God (when we got married), but I didn’t believe in everything that I heard,” she said. “After we started having children, that’s when you realize the love of God. That’s when you can touch it and hold it and just know it with the kids. They really are miracles.”

After marrying at the church in Dixon, the couple moved to Preston. Their 12 children – five girls and seven boys – were baptized at St. Joseph’s Church in Preston. Work at the creamery was a big part of the Bormanns’ life together.

“She worked the night shift,” said David, who became a plant manager. “I worked the day shift. I made cheese for 40 years.”

The family later moved to Fredericksburg, Iowa, more than 100 miles away, when the cheese-making company’s owners moved the production facility. The Bormanns worked hard but didn’t worry about the finances of having many children.

“I wanted 10 kids and (David) wanted two kids, so we compromised and had 12,” joked Gwen. “We accepted that they were gifts from God and they really are. On Sunday, we went to church and on Wednesday, we went to religion class because that was the glue that held us together.”

The Bormann children have a variety of careers. Some went into education, others into health care or business. They range in age from 32 to 49. Combined, the family was marking 216 years of marriage.

“Our parents always modeled for us what it means to pray, love and laugh your way through life,” said son Phillip Bormann, chief administrator of Holy Family Catholic Schools in Dubuque.

“We have been blessed to witness what a relationship founded in Christ looks and feels like and never questioned the love shared between them or that was shared with others,” he said.

Gwen and David moved to Dubuque in retirement to be closer to some of their children. They also enjoy spending time with their 28 grandchildren.

“Renewing our vows as a family only strengthens the bond between us and most importantly, it demonstrates for our children what we hope for their future,” said Phillip Bormann. “It is our turn to show them what love is all about, just as our parents did for us.”