Fatherhood is a concept that is too often misunderstood and misrepresented in today’s society. As children of God, all Catholic men are called upon to share the love and joy of their heavenly Father in their own lives. For those ordained to the priesthood, this means embracing spiritual fatherhood – and acknowledging that it is every bit as essential as its biological counterpart.

Spiritual fatherhood, simply put, is the lifelong commitment of priests to teach, support, and lead their spiritual sons and daughters to Jesus Christ. Its equivalence to earthly fatherhood is not always an immediate revelation to men studying for the priesthood, according to Monsignor Robert Schulte of St. Jude in Fort Wayne. 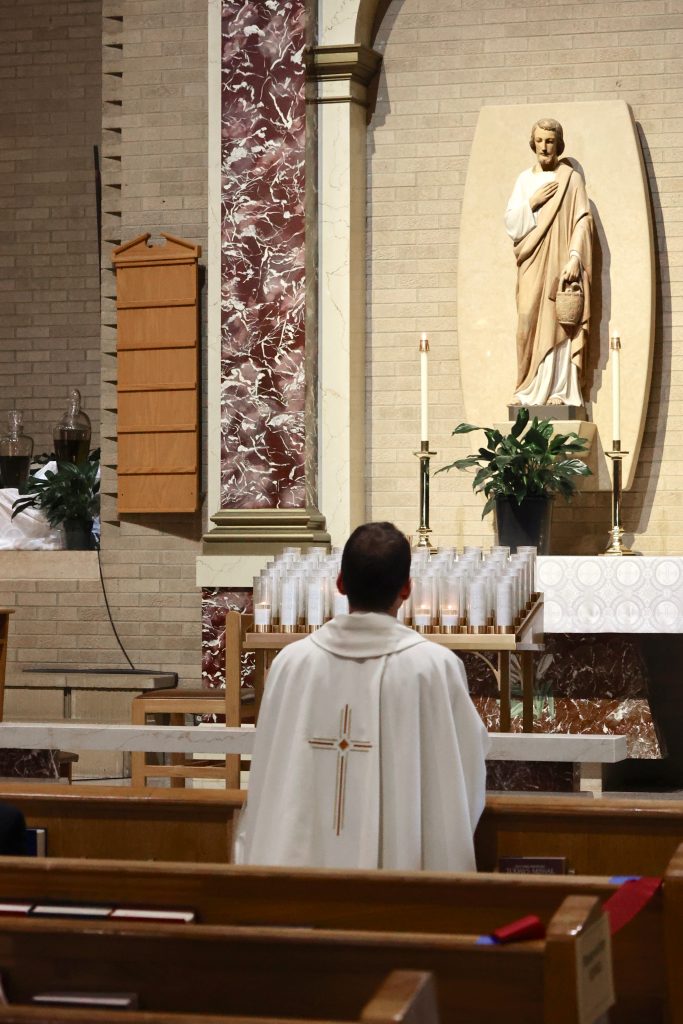 Photo by Jennifer Barton
Priests celebrate Father’s Day in a unique manner, giving of themselves as spiritual fathers to the people to the children of God. Father Terry Coonan, pastor of St. Elizabeth Ann Seton Parish in Fort Wayne, prays before the statue of St. Joseph, the ideal model of fatherhood, at St. Matthew Cathedral in South Bend.

“When I was a young man in the seminary, I wanted to be a father,” said Monsignor Schulte. “I was drawn to the priesthood, but I had to accept celibacy. I had to work it out with my spiritual director that a spiritual father was just as much of a father as a real father. He helped open that concept for me.”

For Father José Arroyo, pastor of St. Paul of the Cross in Columbia City, becoming a spiritual father within the Hispanic community held special meaning to him.

“In Latin America, when they call you ‘Father,’ they really mean it,” said Father Arroyo. “A priest is really a father. They come to us for everything, and not just when the office is open. They seek counsel for everything, invite you into their homes – we’re part of their families.”

The joys of spiritual fatherhood are numerous, but Monsignor Schulte and Father Arroyo both mentioned celebrating the sacraments of Mass and reconciliation at the top of the list. Father Glenn Kohrman, pastor of Holy Family in South Bend, cited the gift of counsel as another treasured aspect of spiritual fatherhood.

“One of the privileged dimensions of being a priest is you can really help some people who may not have had the best experiences of fatherhood,” said Father Kohrman. “Some people are really wounded when they don’t have a father or a mother, and the whole part about being a priest is facilitating healing and trying to bring forth Jesus to them, just in your encounters with them.”

Father Kohrman admitted that this sometimes means “saying the difficult things” that an earthly father would have to say. It also carries a similar level of accountability, claimed Monsignor Schulte.

“I took it seriously when people started calling me ‘Father,’” said Monsignor Schulte. “It meant that I was responsible for leading the Church in the right direction – leading people to Christ and to salvation.”

Much like biological fatherhood, spiritual fatherhood comes with its challenges. In addition to the “false illusions” that Father Kohrman said follow the portrayal of the priesthood in media, priests also face earthly obstacles, which Father Arroyo encountered in an especially poignant manner.

“One of my most moving experiences happened when I went to a mission in Honduras, and we were running out of hosts,” said Father Arroyo. “I broke them as many times as I could, but we still ended up running out. It was the first time I had ever experienced the frustration of a father not being able to feed his children.”

In these trying moments, spiritual fathers can turn to the fatherly figures in their own lives who helped mold them and to the models of the saints who inspired them. Monsignor Schulte said he was blessed by the leadership of his biological father and by the “special love” he holds for St. John Vianney, patron saint of parish priests. Father Arroyo referenced his appreciation for a pair of priests who each played a role in his spiritual journey: Monsignor Emilio Toro, a Columbian priest who moved to Puerto Rico in a time of crisis and attended to the needs of his parish, and Father Benedict Groeschel, whom he cared for following an injury to the elderly priest. Father Arroyo said he is also fascinated by and drawn to the humble service of Blessed Father Solanus Casey. Meanwhile, Father Kohrman said he was provided with strong examples of fatherhood from both his own father and his uncle, Father Don Isenbarger, while also looking to St. Joseph’s quiet example.

Ultimately, fatherhood is only one half of the equation. Monsignor Schulte pointed out the importance of Our Blessed Mother working in union with spiritual fathers, and Father Kohrman echoed the significance of nurturing both paternal and maternal spiritual relationships.

“No matter how crummy our earthly father is – or mother, for that matter – God gave us a real, eternal fatherhood and motherhood in Mary and Joseph,” said Father Kohrman. “And they are truly our foster parents as well.”

This Father’s Day, take a moment to reflect on the spiritual fathers and priests who have blessed your life. Remember to wish them a happy Father’s Day. Remember to tell them how much their dedication and sacrifice mean. Most of all, remember the reason behind their sacrifice: the love of the one true Father, who longs to draw near to each and every one of His beloved children.