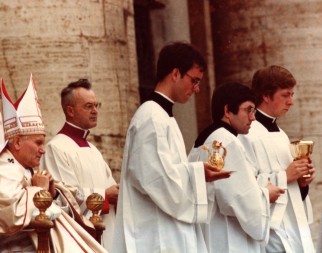 Bishop Kevin C. Rhoades, center, is shown as a seminarian student carrying cruets of wine and water while serving Mass for Blessed John Paul II. “The first Mass I served for Pope John Paul II was on the feast of Corpus Christi in Rome where I was a seminary student. It was in the year 1980, the end of my first year of theology. I will never forget that Mass,” Bishop Rhoades writes in his column. The feast of Corpus Christi is Sunday, June 2.

Every year, on the Solemnity of Corpus Christi, I am reminded of Blessed John Paul II.

The first Mass I served for Pope John Paul II was on the feast of Corpus Christi in Rome where I was a seminary student. It was in the year 1980, the end of my first year of theology. I will never forget that Mass. Before it began, three other seminarians and I were with Pope John Paul in the sacristy of Saint Peter’s Basilica. The Holy Father spoke to us about the Holy Eucharist and the feast of Corpus Christi. He counseled us to make the Eucharist the center of our lives as seminarians and future priests. The Holy Father also spoke to us with apparent nostalgia about the tradition of Corpus Christi processions in Poland.

I watched Pope John Paul prepare for the Mass as he knelt down for silent prayer (several minutes) before putting on his vestments. We then proceeded into Saint Peter’s Square for an outdoor Mass where tens of thousands of people were gathered. At the end of Mass, the Holy Father carried the monstrance with the Blessed Sacrament in a procession around Saint Peter’s Square.

When we returned to the sacristy, the Holy Father said that he would much prefer having the procession through the streets of Rome, like they did in Poland. It was evident that he missed his homeland.

Two years later, while still a seminary student in Rome, but by then an ordained deacon, I had the privilege to again serve Mass for Pope John Paul on the feast of Corpus Christi, this time as a deacon for the Mass. The Mass was celebrated not at Saint Peter’s but outside the cathedral of Rome, in front of the Basilica of Saint John Lateran. After the Mass, the Holy Father indeed carried the Blessed Sacrament through the Roman streets, in a Corpus Christi procession from Saint John Lateran to the Basilica of Saint Mary Major, about a mile long procession. Pope John Paul had brought back a Roman custom that had not taken place for over a hundred years, a custom that he continued throughout his pontificate and which Pope Benedict XVI continued. Pope John Paul wanted the Blessed Sacrament carried into the city, where the people lived, as they did in Poland.

In Krakow (and I imagine throughout Poland), the popular Corpus Christi procession was banned during the Nazi occupation of Poland. Later, the Communists were determined to eradicate this tradition. Prior to the war, in Krakow this great public procession honoring the Eucharistic Body and Blood of Christ went from Wawel Cathedral through the streets of the Old Town to the market square. The communists permitted a truncated procession to leave Wawel Cathedral and process around the courtyard of the royal palace, but the procession was forbidden to enter the city. After numerous protests from the archdiocese, the restrictions were eased a bit so that the Corpus Christi procession was permitted, albeit along a shortened route in the city.

During these processions in the 1970’s, Cardinal Karol Wojtyla, the future John Paul II, preached dynamic sermons in which he spoke of the Eucharist and also about religious freedom and the right to worship. As is well known, the future pope struggled for the building of new churches in the archdiocese of Krakow. He also fought for the restoration of the full Corpus Christi procession.

Every year on this feast of Corpus Christi, I remember the great John Paul II and the Corpus Christi processions in Rome. I remember his words to me about keeping the Holy Eucharist at the center of my daily life and ministry, important advice for all priests.

It is significant that the last encyclical letter written by Pope John Paul II was on the theme of the Holy Eucharist. This year we celebrate the 10th anniversary of this beautiful encyclical, entitled Ecclesia de Eucharistia. If you have not already read it, I highly recommend this encyclical for your spiritual reading. In it, he wrote the following:

The Eucharist, as Christ’s saving presence in the community of the faithful and its spiritual food, is the most precious possession which the Church can have in her journey through history. Blessed John Paul II believed this with all his heart. His Eucharistic devotion and piety were an example for us all.

Near the end of Ecclesia de Eucharistia, we read: “In the humble signs of bread and wine, changed into his body and blood, Christ walks beside us as our strength and our food for the journey, and he enables us to become, for everyone, witnesses of hope. If, in the presence of this mystery, reason experiences its limits, the heart, enlightened by the grace of the Holy Spirit, clearly sees the response that is demanded, and bows low in adoration and unbounded love.”

My brothers and sisters, as we celebrate the Solemnity of Corpus Christi this Sunday, we thank Christ our Lord for this amazing gift. When we receive Holy Communion, we know that we are receiving the most holy Body and Blood of our Lord.

When the people of Israel journeyed through the desert during the Exodus, the Lord fed them with manna. As we journey through the desert of this life, the Lord feeds us with living bread, with Himself, the bread of life. We believe Jesus’ promise that whoever eats His flesh and drinks His blood has eternal life and He will raise him on the last day.

Every time we receive Holy Communion, it is an intimate and personal encounter with Jesus who gives Himself to us. May the power of this sacrament penétrate our lives! Let us never take for granted the unsurpassable gift and priceless treasure of the Most Holy Eucharist!