God, country and community are probably the core values that best sum up Eve Peters’ life. A 28-year veteran and retired lieutenant colonel in the Army Reserve, Peters was recently honored by television station WANE-15, Fort Wayne, as its 2020 Most Remarkable Woman winner.

She has long lived her life in service to others and to her community at a level that goes far above the call of duty.

Hard work is ingrained in Peters’ ethos, as evidenced by the many tasks she has taken upon herself. During her Army career, this mindset landed her in a support position during the Bosnian war and in Iraq for Operation Iraqi Freedom, among numerous other duties. Nowadays she is found in the classroom, teaching special education mathematics at Wayne High School. Of greater impact, perhaps, is her yearning to impart the trait to younger generations.

She does this both through her generous example and her role as youth group leader at St. Mary of the Assumption Parish in Avilla. 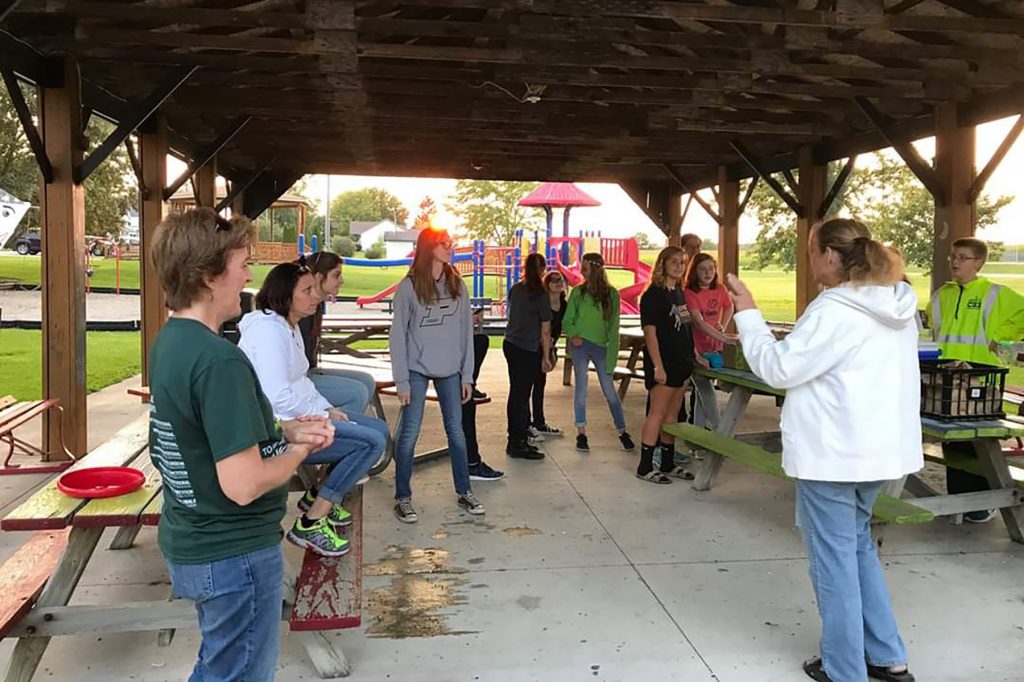 Photos provided by Eve Peters
Eve Peters of Fort Wayne, right, speaks to St. Mary of the Assumption youths at a park in Avilla after a community service project in which the group painted curbs throughout town. Peters has led the youth group for seven years, teaching about the value of service to others.

When she became the youth group leader, Peters decided that the young people had a good background in religion, coming from either St. Mary of the Assumption School or Bishop Dwenger High School; so she focused instead on service to the community.

Many of the youth group’s service projects benefit Catholic organizations. For example, in October, the participants collaborate with the school’s Home and School Association to set up games for the students at trunk-or-treat. The next month, the group makes gifts for residents at Presence Sacred Heart Home in Avilla, delivering them in December when they visit for caroling. In January, they make tie blankets to donate to Gibault Children’s Services in Terre Haute, a home founded by the Knights of Columbus for at-risk youths.

Her strong work ethic and desire to give back have been the driving force behind her volunteerism. “When I’m involved, I’m involved. How do I get involved? I don’t know, it just kind of happens.” One opportunity that “happened” was helping with 4-H, not only by assisting her children with their projects but also running concession stands and serving on the township board. All of her children, even those past the age to participate, are still involved in various ways with 4-H events. 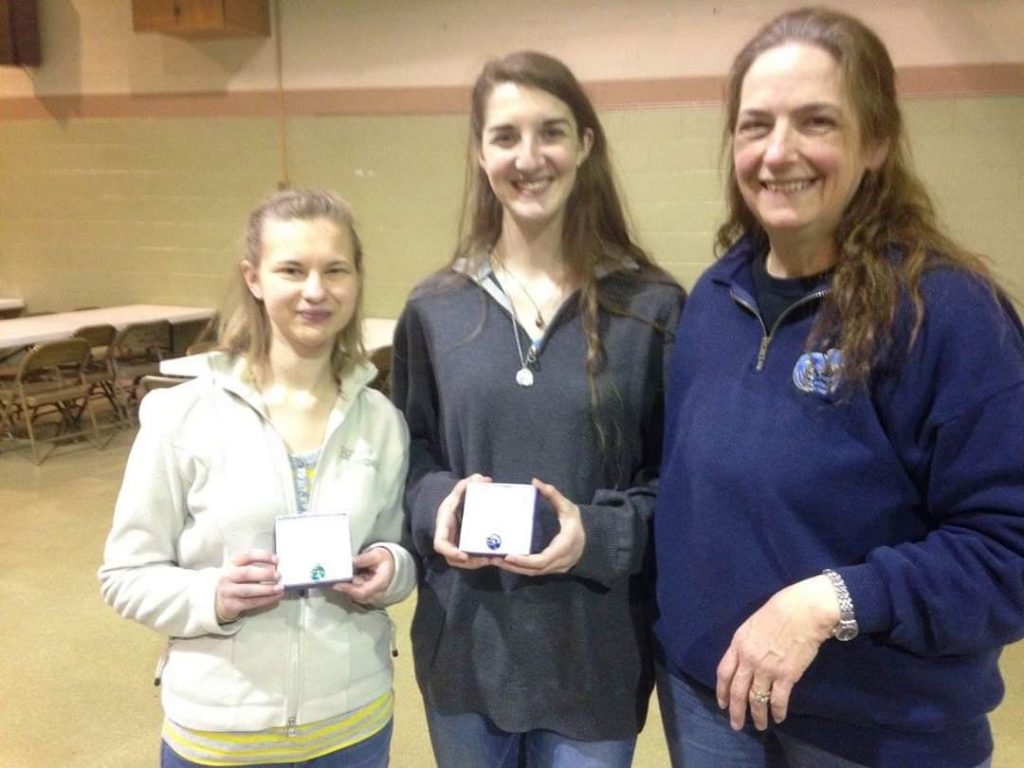 Eve Peters has led the St. Mary of the Assumption youth group in Avilla for seven years, teaching young people about the value of service to others. Here she presents a couple of former members with mementos of their time in the group.

Often, volunteering was not in her plans: but the desire to be involved in her children’s lives led to the opportunities. Washing dishes during her son’s youth group meetings eventually led to her taking over the program. Working preview night for Saints Alive led to co-chairing the Bishop Dwenger fundraising event for two years. Peters joked, “You just put a toe in and all of a sudden your whole leg is there.”

Her husband, Tom, and two sons joined the Knights of Columbus, with Tom serving a stint as Grand Knight for the council. Naturally, Eve became involved with the Knights as well, helping in any way she could. “I’m a true believer of ‘you support,’ so I supported him.”

When daughter Katie became a freshman at Bishop Dwenger, Eve looked for ways to become involved with Saints Alive. Two years later, she was asked to step in as co-chairman. When that happened, Tom told her that meant the couple would be attending the dinner and auction as well. Eve balked, but her military training kicked in. “When you get to a certain position in the military…you go to those events. He said, ‘you’re a chair, we’re going.’”

Even though the tickets were costly on a schoolteacher’s salary, by saving $5 and $10 at a time in an envelope, Eve has had the money to pay for the seats when tickets went on sale. The couple has also began attending the annual Diamond Dinner in October as an anniversary present to themselves.

Eve said she never expected to be nominated for the Most Remarkable Woman award, much less beat out very distinguished competition to win.

Katie wrote the entry to nominate her mother. It came as a surprise to Eve when she received a call from the station manager stating she was one of the finalists. After listening to the incredible stories of the other three nominees, she was even more shocked to find out she had won. The public reveal took place on March 8 at Wayne High School.

Through all of her volunteer hours, Eve admits she doesn’t know how she managed to do everything that she did — coaching soccer, taking classes toward a master’s degree, working and raising children, along with her military obligations. Yet, she is pleased by all she has accomplished and the example she set for her children.

“I couldn’t have gotten as far in my career and gotten to do the things I’ve done with the Army if I hadn’t been in there doing,” she stated. And she has been blessed to do and see many unique things, one of which happened during a six-month duty in Milan, Italy, in support of the efforts of the American military in Bosnia. While there, she was able to secure tickets to the Easter Mass at St. Peter’s Basilica in Rome during Pope St. John Paul II’s pontificate.

As a lifelong Catholic, she appreciates the significance of the opportunity. “The one very comforting thing about being Catholic is that even though the Mass was in Italian, and I knew very little Italian … it doesn’t matter what country you are or where you are in the United States, when you go to Mass, it’s Mass.”

Eve is also proud of her connections to St. Mary and the town of Avilla. Her strong work ethic seems to run in the family: She shared that “My ancestors helped build the church. I have a picture of my great-uncle as they were putting the cement steps in. A lot of our ancestors were carpenters, so they helped build the town. My children are the 10th generation to live here.”