A cold, gray, wintry day in South Bend seemed like an appropriate setting for the burial of 2,411 aborted babies, whose remains were interred there Feb. 12.

The babies had been aborted between 2000 and 2003 by the late Dr. Ulrich “George” Klopfer, who operated abortion clinics in Indiana since the 1970s and committed an estimated 30,000 abortions before having his license revoked in 2016.

The medically preserved remains of those fetuses had been transported across state lines and stored for years on Klopfer’s Illinois property, in his garage and in the trunk of a car. The grisly discovery of the remains was made after his death Sept. 3 last year. Neither his family nor authorities have been able to determine why Klopfer kept the remains instead of properly disposing of them. Indiana law now requires fetal remains to be cremated or buried.

Records found with the remains indicated the abortions had taken place in South Bend, Fort Wayne and Gary, so Indiana Attorney General Curtis T. Hill Jr. took possession of them.

Originally, an effort was made to determine in which city each abortion took place so that the remains could be returned home for burial. The state received several offers of burial locations, including an offer by Bishop Kevin C. Rhoades of the Diocese of Fort Wayne-South for space and services at Catholic Cemetery in Fort Wayne. 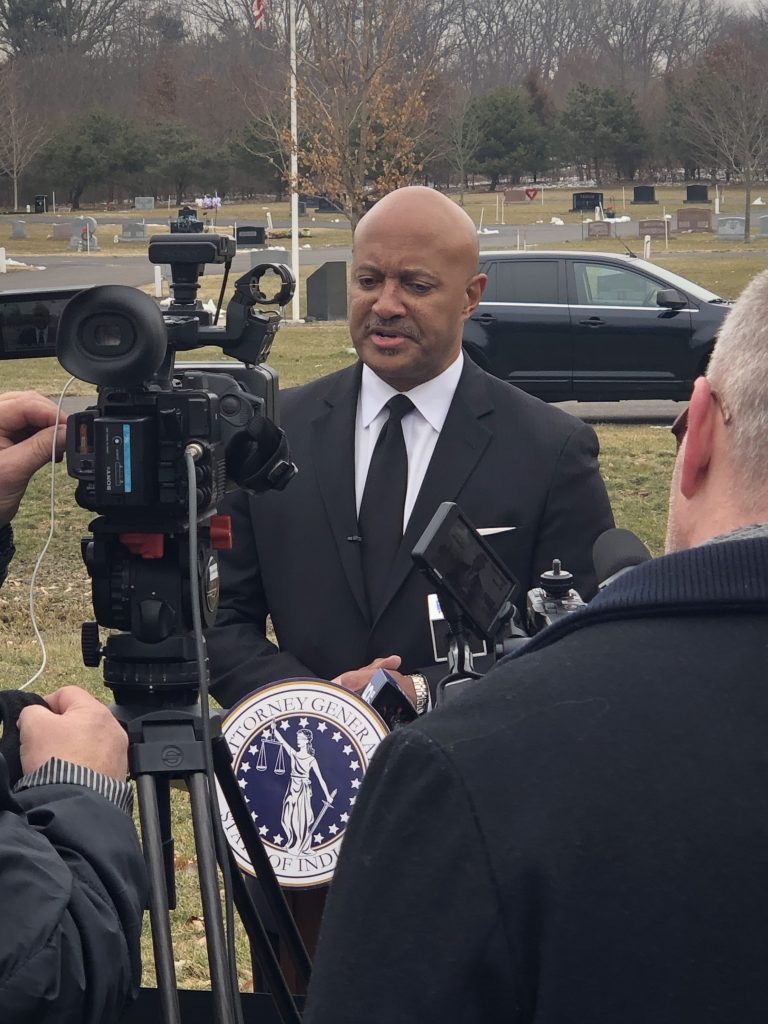 Provided by the Indiana Office of the Attorney General
Indiana Attorney General Curtis Hill Jr. speaks during a brief news conference at Southlawn Cemetery in South Bend Wednesday, Feb. 12, before a burial service for 2,411 aborted fetuses that found in the home of deceased abortionist Ulrich Klopfer in September. A just-passed Indiana law now requires fetal remains to be cremated or buried.

However, Klopfer’s records were so incomplete and inaccurate that Hill’s office was unable to determine where each abortion occurred. Thus, it was decided to bury the remains together, “each connected by their common fate,” Hill explained at the burial service. South Bend was chosen as the site because it is the most central of the three cities involved.

In his opening remarks at the burial service, Hill told a somber crowd of over 200 mourners: “The shocking discovery of 2,411 medically preserved fetal remains in Illinois left in a garage and in the trunk of a car was horrifying to anyone with normal sensibilities. Regrettably, there is no shortage of depravity in our world today, including due regard for the most vulnerable among us. And so, we brought them home, back to Indiana.”

The attorney general said that not only was it Indiana law that fetal remains be buried, it was fitting and proper for the aborted babies to receive a final resting place, just as it is appropriate for any human being. He observed that people hope it could never happen that 2,411 unborn human beings would been terminated, discarded, lost and forgotten.

“But friends, we will not forget,” Hill said. “We therefore honor and memorialize these unborn that their lives be remembered not for their brevity, but for how their discovery has impacted our collective conscience. May each of the 2,411 buried here rest in peace.”

Hill thanked Indiana, Illinois and local authorities who worked together to bring the babies to their final resting place and acknowledged the many offers of assistance by countless others across the state. 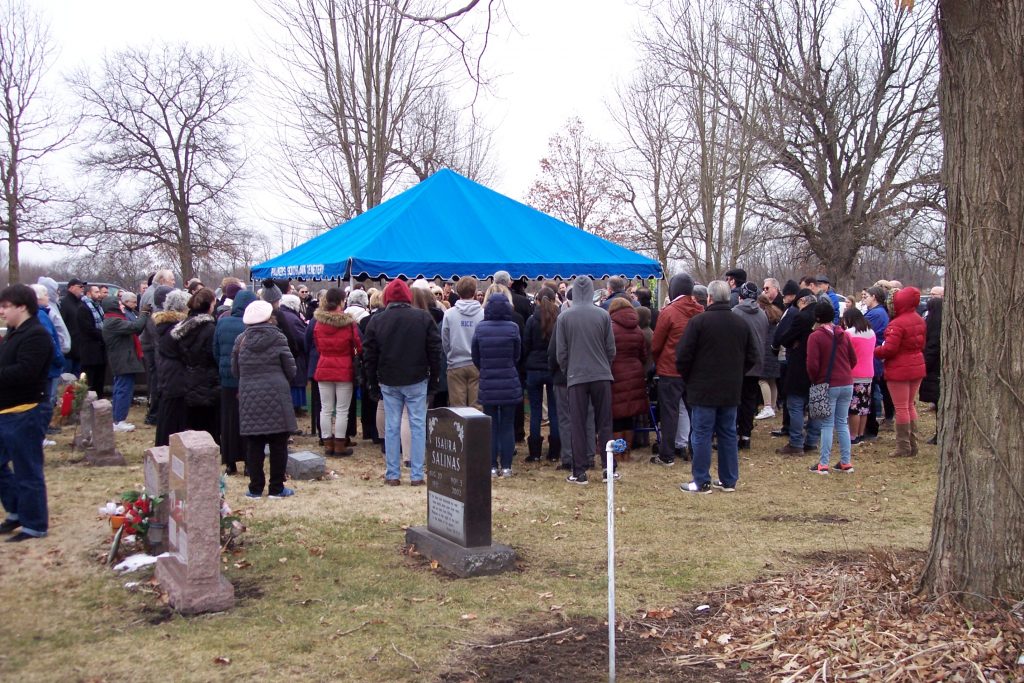 A crowd of people pray at a collective burial service Feb. 12 for the 2,411 fetuses found in the Illinois home of abortionist Ulrich Klopfer after his death last fall. The fetuses were aborted at Klopfer’s former offices in Gary, South Bend and Fort Wayne. 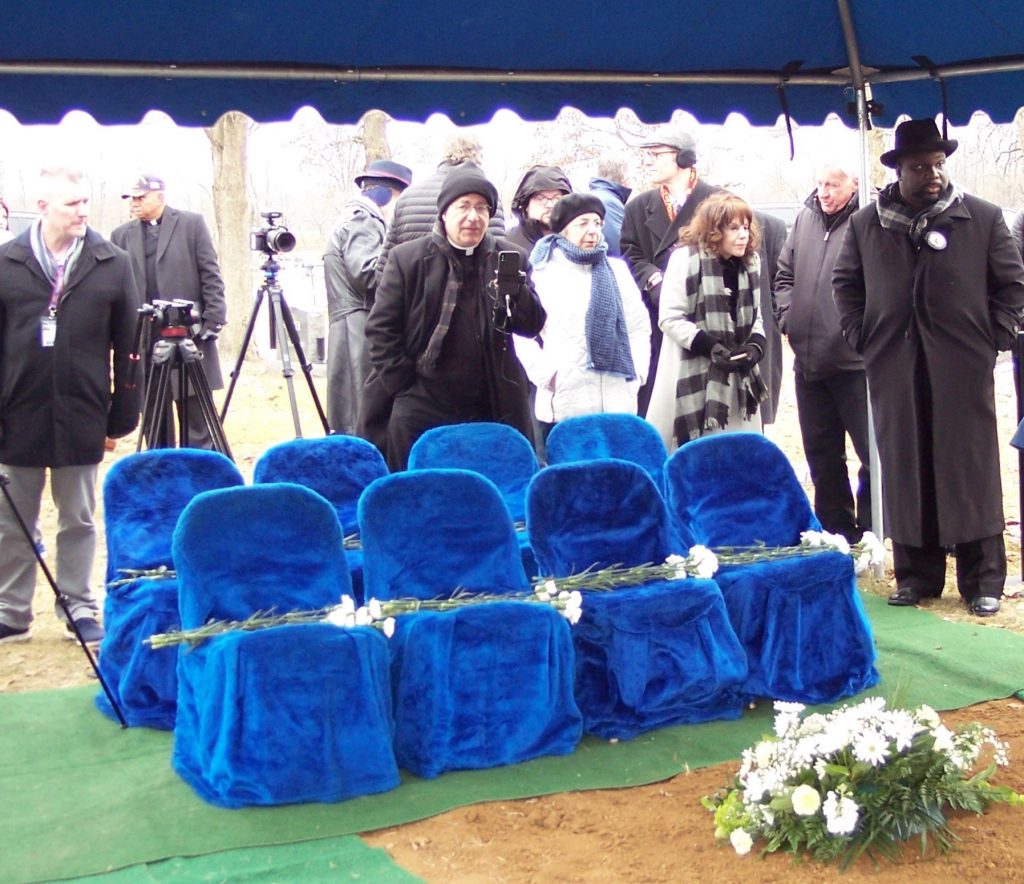 The South Bend funeral home at which a burial service took place Feb. 12 for the fetuses also provided a tent with chairs for family members — chairs that remained empty during the brief service.

Palmer Funeral Home donated the burial space at its Southlawn Cemetery and the memorial stone, which reads, “In memory of the 2,411 precious unborn buried here on February 12, 2020.” The funeral home also provided a tent with chairs for family members, chairs that remained empty during the brief burial service.

The attorney general also thanked the 200-plus mourners for coming to “personally honor and memorialize these 2,411 precious unborn who now stand as a reminder of the fragility of life and of the obligation of the state and of the nation to preserve human dignity and respect for all.”

After Hill left the podium to conduct a news conference, a multifaith prayer service took place, led by a variety of religious leaders. Among them was Father Glenn Kohrman, pastor of South Bend’s Holy Family and St. John the Baptist parishes and a board member of Catholic Charities and Right to Life Michiana (formerly St. Joseph County Right to Life). Father Kohrman offered a modified version of the Catholic Church’s prayer of Commendation of an Infant Who Died Before Baptism. 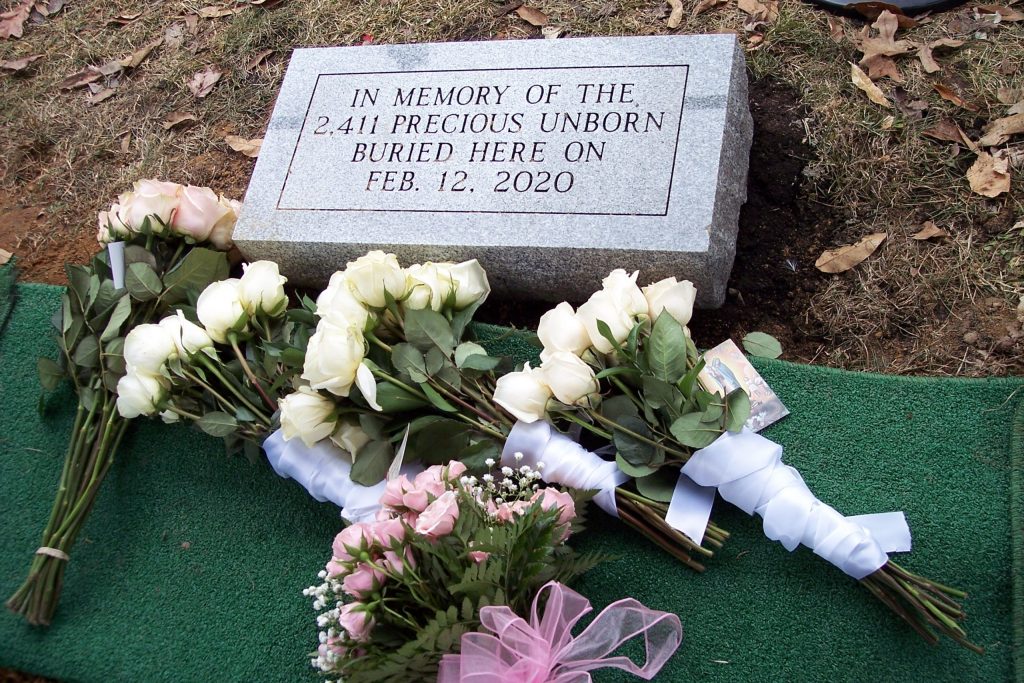 Photos by Ann Carey
A memorial stone has been placed at the burial site of 2,411 aborted fetuses found in the home of deceased northern Indiana abortionist Ulrich Klopfer last fall. The South Bend funeral home at which a burial service took place Feb. 12 for the fetuses also provided a tent with chairs for family members — chairs that remained empty during the brief service.

Sister Agnes Marie Regan of the Sisters of St. Francis of Perpetual Adoration in Mishawaka attended the burial service with several of her Franciscan Sisters, and probably spoke for the hundreds of mourners when she told Today’s Catholic that she attended because, “These are our brothers and sisters.”

A memorial service at the gravesite will take place Sunday, Feb. 23, at 3 p.m., sponsored by the right to life groups of Lake County, Michiana and Northeast Indiana.