Hundreds of men convened at the Allen County War Memorial Coliseum in Fort Wayne for the annual Rekindle the Fire conference on Feb. 26. Fathers Ben Muhlenkamp and Stephen Felicichia emceed the conference, which saw men of all ages gather together united by faith.

The men heard from several speakers, had time for discussion and celebrated Mass with Bishop Kevin C. Rhoades, who also participated in a Q&A session. 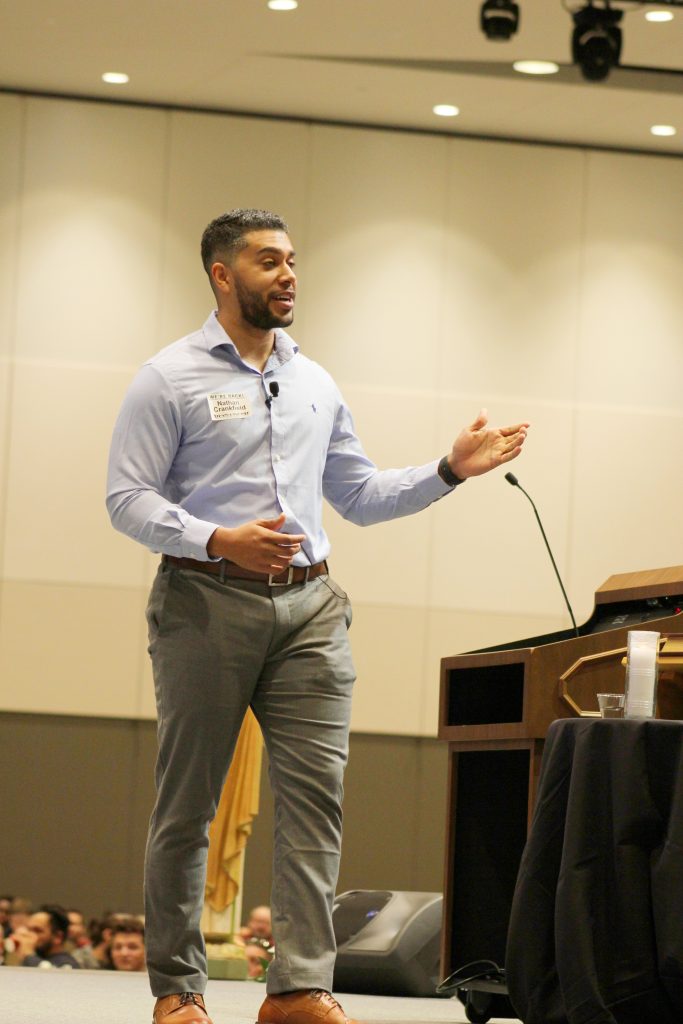 Nathan Crankfield, former Army officer and convert to Catholicism, speaks to the men present about his faith journey and excellence in all things. — Photos by Amy Kleinrichert

The first speaker, Nathan Crankfield, talked about excellence, as well as his conversion journey. Crankfield said that his parents were different faiths, and that he was raised as a Lutheran. He began kindergarten at a Catholic school, where he was introduced to the Church and ultimately converted at age 13. 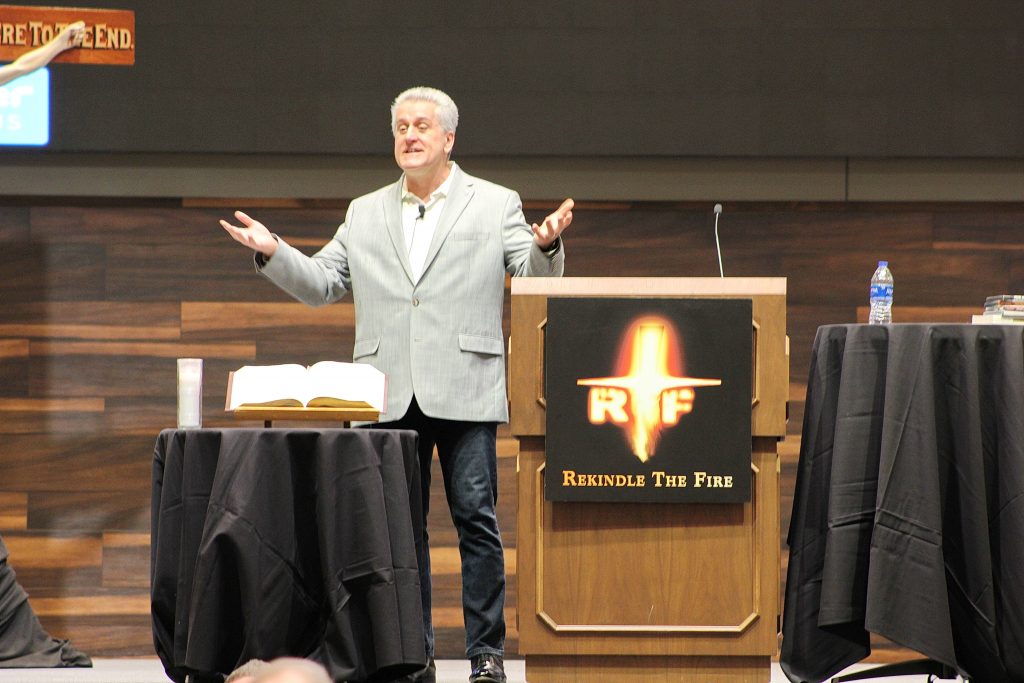 Catholic apologist Tim Staples presents on how to defend the faith when questions arise.

The second speaker, Tim Staples, touched on Catholic apologetics, which center around defending the faith. He said that he had conversed with someone who thought that the Catholic belief in transubstantiation was incorrect, thinking, “Do Catholics really believe that God is holding Himself in his Hand at the Last Supper?”

Staples says that he responded to this questioning by asking the individual if they believed that God couldn’t hold Himself in His hand if He wanted to do so.

The third speaker, Jason Shanks, spoke about experiences surrounding his time recovering from COVID-19, and how this brought him closer to his family and the Lord.

Throughout the day, a number of diocesan priests were available for reconciliation, and there was a quiet space that had been converted into an adoration chapel for men who wanted to step out of the conference hall to visit and pray before the Lord in the Eucharist.

Brandon Peat, one of the men participating in the conference, has been attending Rekindle the Fire off and on since its inception. This year, he attended with his father and brother.

“It’s pretty cool to see the growth and the response over the years.”

Peat says that the guest speakers and the spiritual value of the conference drives him to return to Rekindle the Fire, as well as the experience’s relevance to everyday life.

“Every year, it’s a different lineup of speakers,” said Peat, “so that’s always great. But it’s kind of like a spiritual shot in the arm, once in a while, getting those kinds of experiences that help. You can then take that encouragement or what you’ve learned, and then take that back into the rest of your life.” 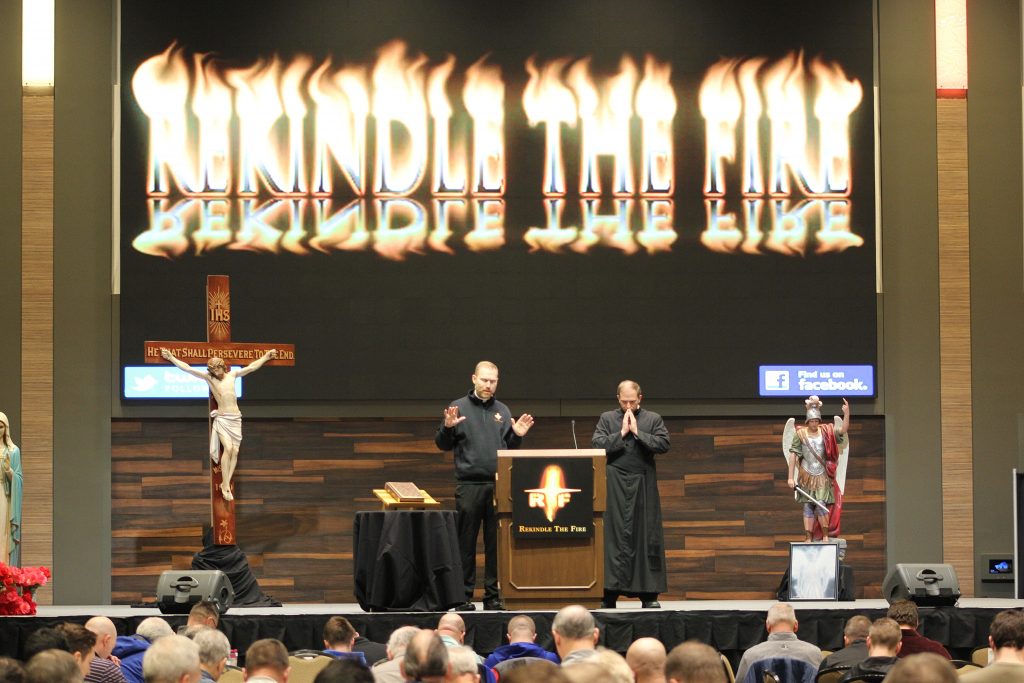 Father Ben Muhlenkamp and Father Stephen Felicichia emceed the event. Father Muhlenkamp offers a prayer over all those who attended.

Of the speakers, Peat said that he liked all of them. However, he resonated most with Crankfield’s talk at the beginning of the conference.

“I think I really responded to Nathan, the first speaker, and him kind of talking about excellence. And how excellence is something for every area of your life. It’s not like something you turn on and off in different areas. I think that, like a lot of men, I kind of stereotypically fall into the habit of like, excellence at work and then everything else kind of falls to the side. Whether that’s family or faith – whatever. I think that’s a good wake up call for me, personally. Yeah, I can’t just be striving for excellence here. It needs to be everywhere.”

Peat added that he finds the atmosphere of fraternity among those gathered to be especially striking. He said, “I love the conference, because I keep coming back year after year. It’s really cool to be in a room with a thousand other Catholic men. I don’t think that we are the most social creatures by habit.” 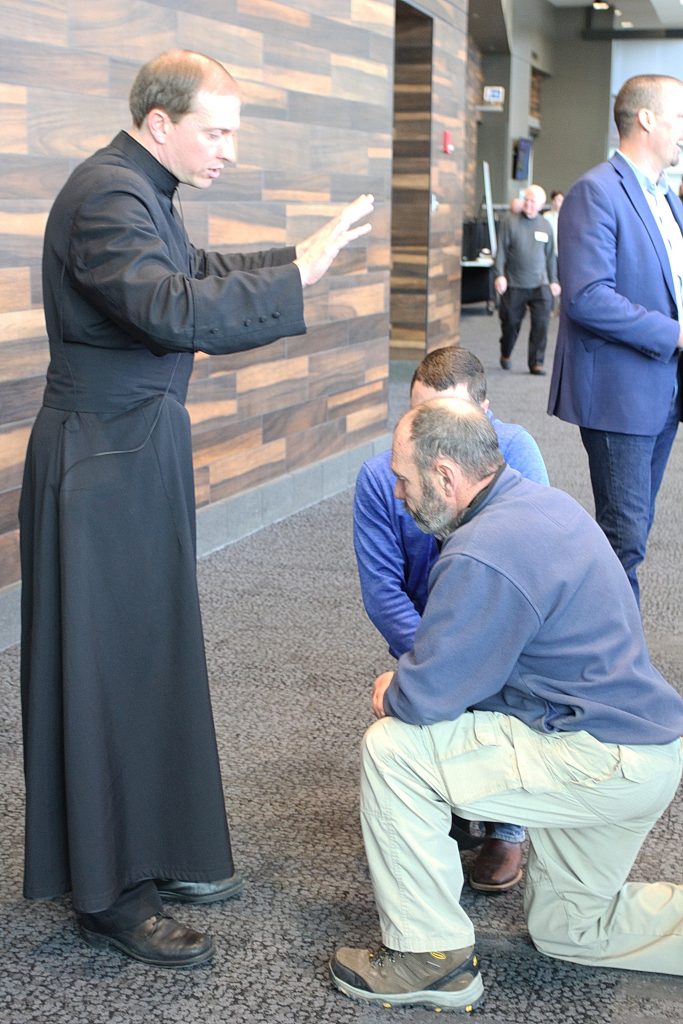 This brotherhood, Peat says, becomes most obvious toward the end of the Rekindle the Fire conference. “And when there’s something like at the close of the ceremony, we sing a Hail Mary together. And it’s really cool to hear the deep timbre of voices from a thousand men singing that because you’re used to singing songs in church, but you know, you get a range of all voices.”

Peat continued to say that he thinks that, while singing at church, most of the men are probably mumbling. Because this group of men are actually singing rather than merely mumbling at the conference, it makes for a unique yet infrequent experience.

“It’s really cool to just feel like that brotherhood with all the other men there who are, you know, strong in their faith. It’s just a really cool experience.”