A record-setting attendance of about 1,120 men and a lineup of nationally recognized speakers helped make the Feb. 16 diocesan “Rekindle the Fire” conference, which took place in South Bend, both compelling and countercultural.

The focus on confronting today’s challenges to faith and family sparked tough talk as well as calls for personal conversion. Action items proposed during this ninth annual event were characterized by boldness and perseverance, alongside humility and sacrifice. 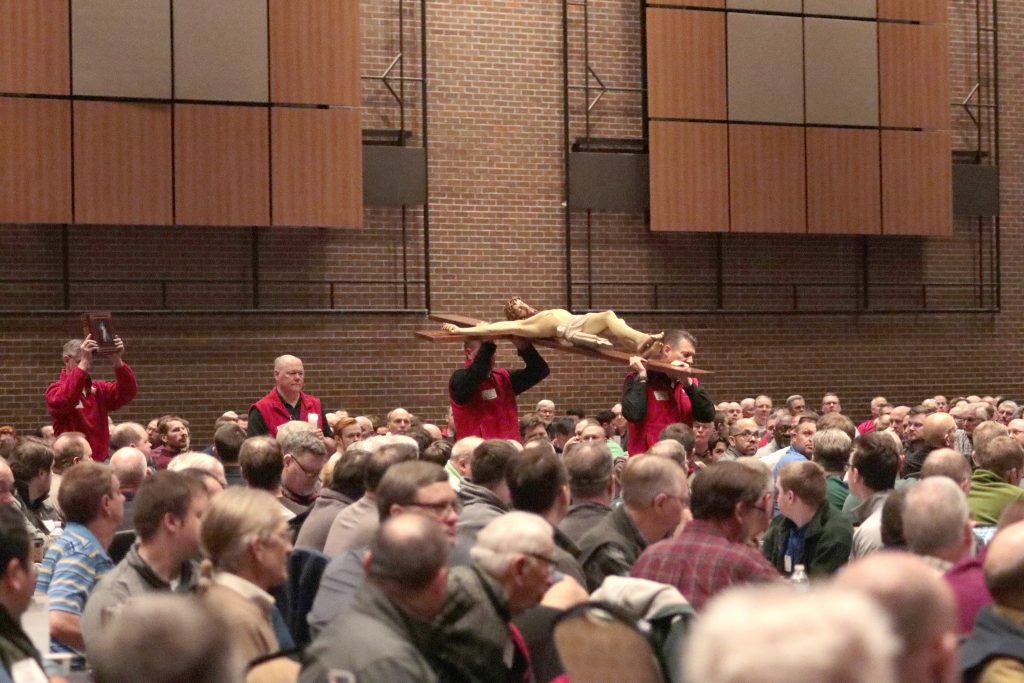 The Rekindle the Fire cross is carried in at the start of Mass. — Photos by Jonathan Acierto

Bishop Kevin C. Rhoades celebrated Mass for the multigenerational group which, according to event organizers, constituted the largest turnout yet seen at South Bend’s Century Center for the daylong experience.

After a time of prayer and reflection, Father Don Calloway kicked off the gathering by relating his personal conversion story, a depiction of hope arising amid tragedies.

“You’re in a world right now that is really messed up and in a bad way,” he told the men. A member of the Congregation of Marian Fathers of the Immaculate Conception, Father Calloway described his journey to young adulthood and later priesthood. His early days included a broken family, atheism, thoughts of suicide, stays in rehabilitation centers and immersion in sex, crime and drug abuse.

Calling his own story an “extreme” example of wounds from unacknowledged sin, he told the audience he was there to “give you a spiritual kick in the pants.” He urged people to accept God’s mercy, which can enable the ongoing conversion everyone needs. 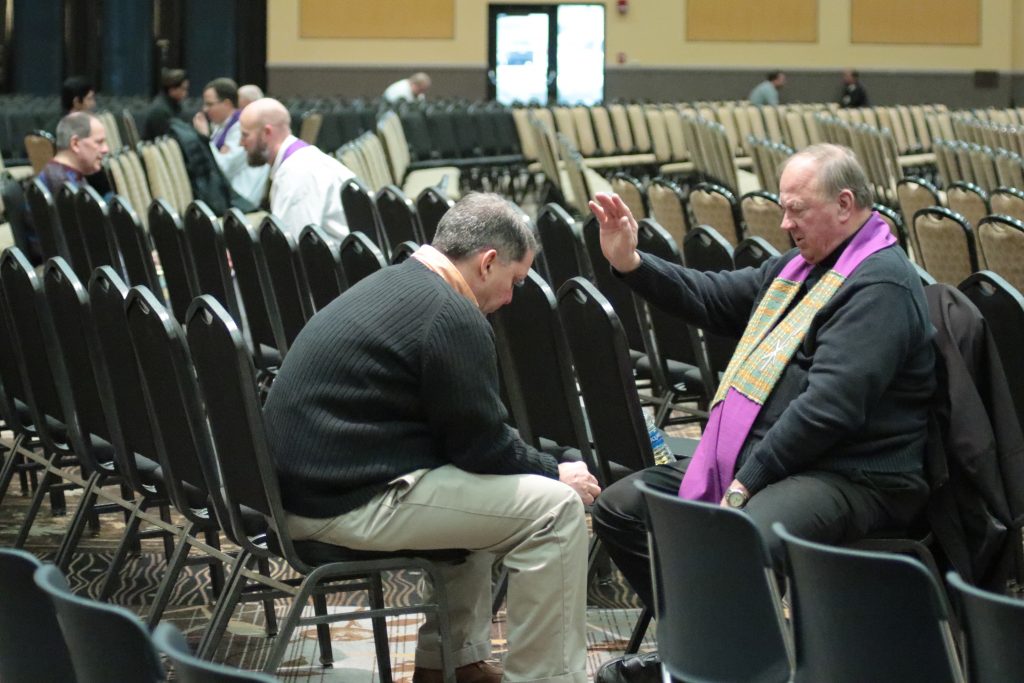 participants take advantage of the opportunity to obtain the sacrament of reconciliation, which was offered throughout the day.

Father Calloway’s testimony affirmed comments from Father Benjamin Muhlenkamp, who served as master of ceremonies for the conference. He encouraged those present to partake in the sacrament of reconciliation. More than two dozen priests were on hand to hear confessions.

“Wouldn’t it be great today if you received the Eucharist in a state of grace?” Father Muhlenkamp asked.

Deacon Burke-Sivers built his dynamic presentation around the theme of the conference, “Are You All In?” In light of Jesus’ redemptive sacrifice for us, he said, we’re called to “be great men of God by going all-in for Christ” and witnessing to Him in society and in the family.

“The greatest gift I can give to my children is to love my wife as Christ loved the Church and to die to myself, every day of my life, to live for them,” the deacon said. He also warned attendees not to let today’s culture “run roughshod over us” by redefining foundational concepts. Marriage, traditionally defended as a central, common-good institution, is changing based on rejection of the literal definition of “matrimony” — “the state or condition of motherhood,” he said.

Regarding the need to confront the root causes of one’s most destructive tendencies, the deacon cited David’s battle with Goliath. “You cannot fight the Goliaths in your life with the weapons of man,” he said, holding up a rosary as his spiritual weapon of choice.

“You want to defeat the power of sin in your life?” he asked. “Work the beads.” 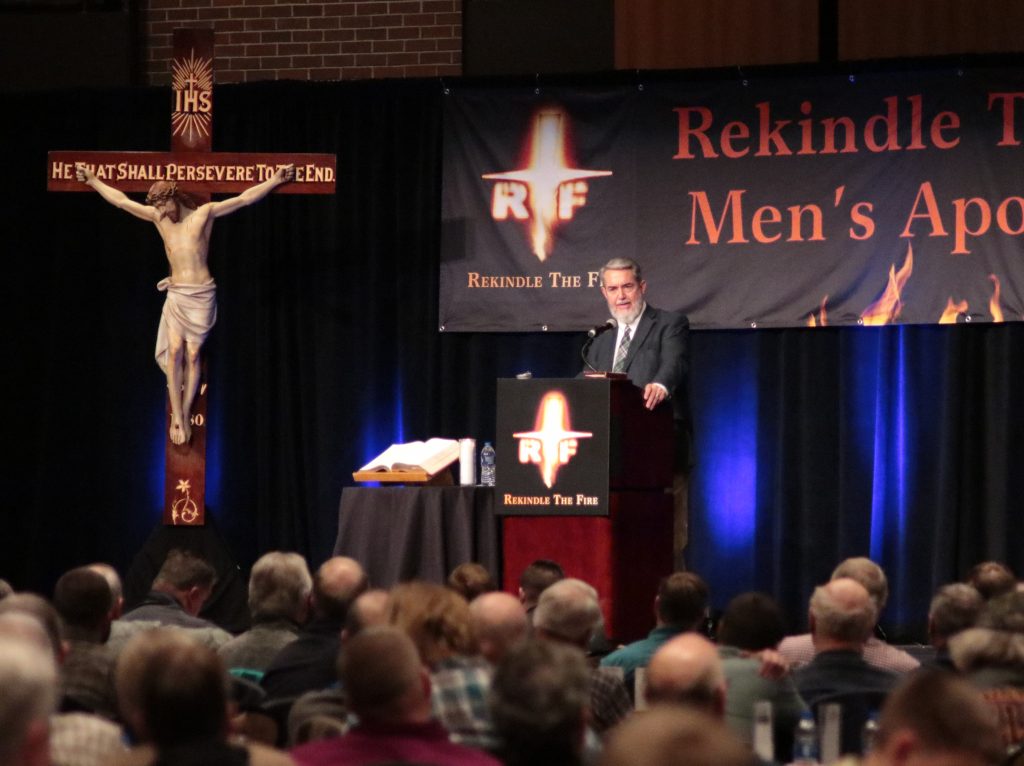 Dr. Scott Hahn addresses men of the Diocese of Fort Wayne-South Bend at the ninth annual Rekindle the Fire Men’s Conference, which took place in South Bend on Feb. 16. The well-known Catholic theologian and author encouraged the audience to learn from Jesus about the nature of God the Father. — Jonathan Acierto

Prolific author Scott Hahn continued the theme of conversion in his talk, telling the audience that men must “reignite this fire” constantly so “we make it home to heaven and … take as many along with us as we can.” He urged pondering more deeply the Lord’s Prayer to garner insights from Jesus about God as our Father and about our nature as His family. Jesus talked much more about God as “Father” than the Old Testament did, he said. The Our Father shows we are God’s family.

Hahn also said that the prayer displays an order of priorities. Those who pray the Lord’s Prayer pray that God will forgive, guide and deliver man from evil. But first, the person who prays focuses on His greatness and His Kingdom. This “puts all of our problems in perspective.”

“I’ve got words for you, brothers,” Hahn told the attendees. “The next time the devil tells you about your past, remind him of his future. To hell with him. You rekindle the fire of God’s love, and you will burn up the devil.”

Phil Sang, who leads the RTF conference committee, confirmed South Bend attendance hit a record level this year, although the turnout still was a bit smaller than the maximum previously achieved in Fort Wayne.

Joe Brown, who leads the RTF core team, said planning already is underway for the 10th annual RTF conference in 2020 in Fort Wayne. 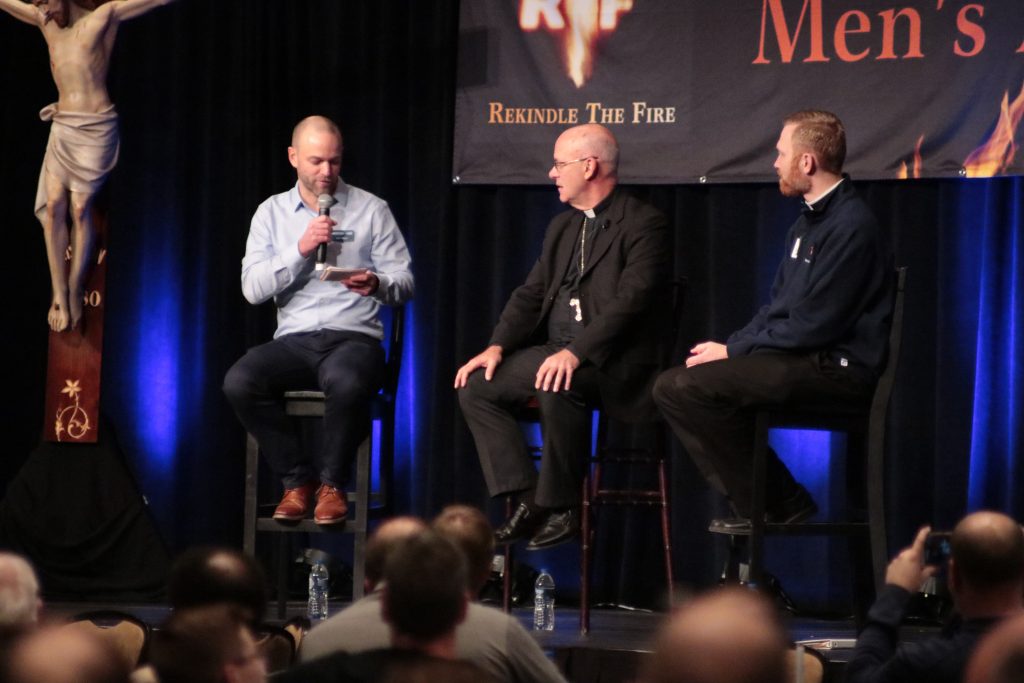 As always, Bishop Rhoades showed support for the Rekindle the Fire Men’s Conference. He held a Q&A session and later celebrated Mass. Addressing the numerous young men in the audience, he said, “I’ve been so impressed by so many of our young adults who are active Catholics when many of their peers are not … They have to make a conscious choice to be Catholic.”

Addressing issues of the Church sex abuse crisis, he said a mechanism is needed for holding bishops more accountable. Along with solid spiritual and human formation in seminaries, he said there must be a high standard of moral formation — “an adherence and belief and conviction that the Church’s moral teachings in sexuality are the truth, and one is going to preach that and one is going to live that.”

The conference concluded with Mass, at which Bishop Rhoades preached about Jesus’ teaching of the Beatitudes, from the Sunday Gospel reading. Echoing the daylong theme of conversion, he noted that the Beatitudes are a roadmap from Jesus for true happiness and a “reversal” of typical worldly values. They call “blessed” those whom secular culture would dismiss as losers.

When affluence, power and prestige become idols, they entrap people, the bishop said. “You and I weren’t made for comfort. We were made for greatness. We’ve been made to be like Jesus, to live like Jesus.”

He concluded with hope for the Rekindle the Fire attendees: “May God help us to be men of the Beatitudes — in other words, saints.”