The upcoming “Rekindle the Fire” men’s conference, a strong and growing tradition in the Diocese of Fort Wayne-South Bend, invites the Holy Spirit to bring the blessings best suited to each of the more than 1,200 men expected to attend Feb. 22 at the Allen County War Memorial Coliseum.

One example of the graces for male spirituality that are received at the conference is the inter-generational bonding experienced by Brian Carmody and his family. Carmody, his wife Nicole and their three sons are members of St. Vincent de Paul Parish in Fort Wayne. He shared his story about gifts that have already overflowed to Sam, 19; Luke, 16; and Jacob, 15.

How did Rekindle the Fire become a ‘family affair’ for you and your sons?

I never went just by myself. I started taking my oldest son, Sam, who’s now 19, when he was about 15. He liked it. I had been involved in Christ Renews His Parish, and I liked that environment where everyone is open and honest and you’re there to just be guys, just who you are. Sam had gone to a Life Teen retreat, and he and I had talked for a half-hour after that retreat. I wanted him to have the same kind of experience with an older group.

(In 2016), I was planning to go with my brother and a co-worker. By design, we each invited our sons, so it was a peer group for them. It was just what I thought it would be. The boys were all-in. Sam and I still talk sometimes about that first one and about one of the speakers, Jesse Romero, who urged men to be like sheepdogs, looking out for people.

So attending with your oldest son became an annual practice?

We went to both Fort Wayne and South Bend. Last year, along with Sam, I took my other two sons when they were 15 and 14. And again my brother went with his son. I expected a little pushback about spending the whole day and traveling to South Bend. But they really enjoyed it; they said, “This was really good, Dad.”

They had met one of the priests they know. It was neat to see all the priests there. The confessions are awesome — something I always look forward to doing. But the conference format lets you do what you want. I was amazed by the sheer number of people there — the growing number.

How did it affect everybody?

One of the takeaways is being in a good environment where you have that full day, you’re pretty much immersed. You soak up more. You break up into groups and have great conversations. It’s just great to see all these guys sharing a vision of how we should live our lives, with the help of great speakers and the guys who help put the event on.

What the boys hadn’t gotten before was some of the stories. They were really neat — especially the Father Don Calloway, the surfer priest. You get so many different perspectives. It makes you realize, “I’m on a different journey.” But it’s not bad. It’s just you.

How have the conferences affected you personally?

Early on, I was invited to be in one of the ongoing local Rekindle the Fire groups. Our group is named the sheepdogs, after Jesse’s talk. It was five or six people to start with: Now it’s up to about 15. We meet every three or four weeks. It’s that extra boost you need for getting engaged and to get that male camaraderie — in an environment where you can say whatever. Usually nothing earth-shattering, but it’s a laid-back two hours. It’s good for the soul, that’s for sure.

The kids aren’t ready for that yet, but I think when the time is right they’ll feel comfortable. We’re reading “Be a Man,” by Father Larry Richards. 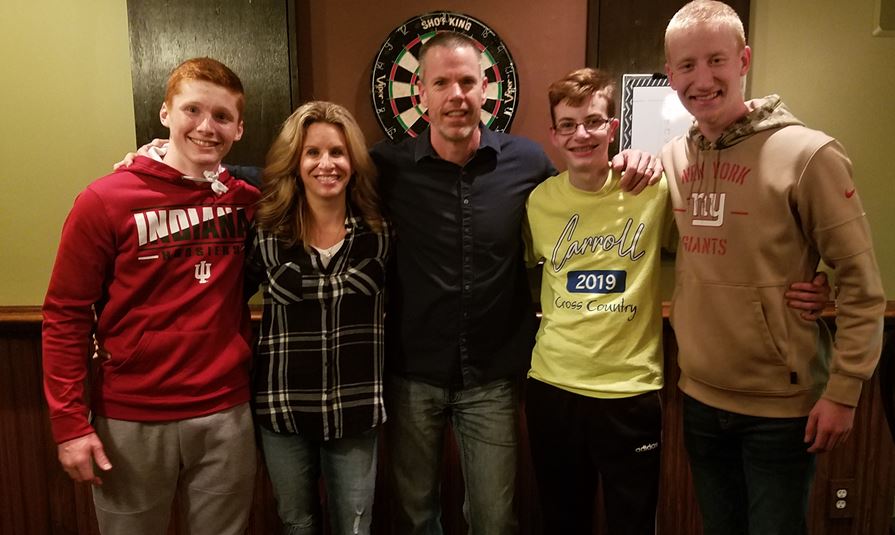 Provided by Brian Carmody
Brian Carmody speaks to the transformation in himself and his family that has come about due to the experience of attending Rekindle the Fire men’s conferences.