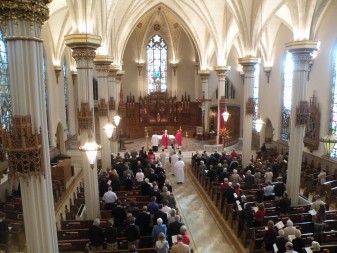 Bishop Kevin C. Rhoades at the recessional for the Red Mass held at the Cathedral of the Immaculate Conception in Fort Wayne on Oct. 3.

FORT WAYNE — Dozens of area attorneys, judges and elected officials gathered Sunday at the Cathedral of the Immaculate Conception in Fort Wayne for the annual Red Mass celebrated by Bishop Kevin C. Rhoades.

Dating back to 13th-century Europe, the traditional liturgy asks God’s guidance and blessing on all those who serve the law. The program for the Mass noted that the name “Red Mass” comes from the red vestments used by the celebrant which are symbolic of the Holy Spirit, who is the source of wisdom, understanding, counsel and fortitude. Those gifts are necessary in the dispensing of justice in the courtroom, in the individual attorney’s office and in sessions of local, state and national government.

In his homily Bishop Rhoades also made reference to Respect Life Sunday, which was being observed on the same day in other parishes around the Diocese of Fort Wayne-South Bend and across the country. He called it “quite providential” that the two events were simultaneous since the defense of human life and dignity is the responsibility of those in public office and the legal profession.

Bishop Rhoades warned his listeners about the danger of moral relativism and reminded them that the Church teaches that civil law must conform to moral law. He expressed further concern about the degredation of the concept of “freedom” surrounding life issues into “license” in this country.

There is a tendency to think that moral law is in conflict with human freedom when nothing could be further from the truth, he pointed out. The freedom we enjoy in a democracy needs a solid moral foundation.

He then quoted Pope John Paul II who said that no human law can justify crime to human life or it becomes a perversion, and that when the right to life is denied or is not safeguarded, it leads to the death of true freedom.

Bishop Rhoades concluded by saying that a concern for life must be the responsibility of attorneys, judges and public officials and asked the Holy Spirit to guide and strengthen his listeners to follow the Gospel of Life.

FORT WAYNE— Dr. Theresa Rice Farnan, former Thomistic philosophy professor at Mount St. Mary’s in Maryland and now adjunct professor at Franciscan University, Steubenville, Ohio, was the guest speaker at a brunch in the Grand Wayne Center following the annual Red Mass at the Cathedral of the Immaculate Conception on Sunday. The event was open by invitation to lawyers, judges and public officials, all those who serve the law and strive for justice.

Dr. Farnan entitled her remarks, “Moral Foundation of the Law,” and cited excerpts from the recent encyclical of Pope Benedict XVI, “Caritas in Veritate.”

The encyclical, published in 2009, reflects on social issues and problems and their solution through moral principles. It states that charity in truth is the principal driving force behind the authentic development of every person and of all humanity. And that love is the force which leads people to opt for courageous and generous engagement in the field of justice and peace.

Farnan said charity should be rooted in truth and that will inspire us to generosity. Without truth, however, charity will degenerate into sentimentality.

Today’s “dictatorship of relativeness” is critical of anyone claiming moral truth, she noted. And since religion is thought to be a “privately-held belief,” moral truth shouldn’t be imposed on others. The end result of that kind of thinking is that the state becomes the final arbiter of truth, defining how we relate to each other. The state has power over life, death, the family, and sometimes, the Church. Then the law exists to further the interest of the state and not the individual, she pointed out.

Farnan cited several principles embodied in “Caritas in Veritate,” which form the moral foundation of law: First, each person is loved by God and has no freedom without God. Second, God made us social beings in his image so that our relationships cannot be separated from him. Third, the good in God is so attractive that we naturally seek it. The inclination of humans for self-preservation and promotion of the species, their wish to live in society, and their desire to know the truth and make decisions are the definition of natural law from which just human law must be derived, she pointed out.

Continuing, Farnan enumerated a fourth principle contained in the encyclical, that religious freedom strengthens society. The alternative is a theocratic or atheistic society, she said.

Fifth, human rights confer duties and responsibilities toward others; rights and responsibilities cannot be separated. Sixth, our choices must be based on moral evaluations. Human action is the result of thinking and choosing in good conscience. And seventh, charity is a gift to all of us. Our charitable actions build the common good and satisfy a personal need as well.

Farnan stated that the law is necessarily grounded in morality, otherwise it is merely an exercise in power. All the principles outlined in her remarks are applicable because her listeners advocate for others and are responsible for the public trust. “Bring truth into the public square,” she instructed them, by applying morality to your decisions. “God is present alongside those who come to work for justice.”