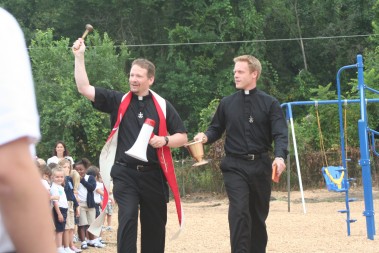 The National Catholic Education Association (NCEA) has awarded Holy Cross Father Neil Wack the Distinguished Pastor Award for his outstanding support of Catholic education. He is shown blessing the school’s playground, which he helped raise funds for and installed at Christ the King School in South Bend. Holy Cross Father Kevin Grove, parochial vicar, is at the right.

Since taking the helm at Christ the King, Father Wack has enacted a five-year plan for school improvement, eliminated the parish debt, implemented a bullying prevention program and personally raised funds for a safe new playground for the students. Additionally, he has initiated a twinning relationship with a parish in Bangladesh.

“Not only does this encourage global learning for the students, but provides them with the opportunity to practice Christian works of charity,” said school parent Kathleen Kloska.

Under Father Wack’s leadership, Christ the King School was recognized nationally in 2008 by the U.S. Department of Education, earning the status of Blue Ribbon School.

Father Wack begins every school day in the parking lot opening car doors, greeting students and parents. He is frequently seen in the classrooms and school hallways, and is the regular presider at all-school Masses.

“He engages the children in a faith-filled experience each time. As a teacher I can’t help but notice how my students light up when Father begins his homily with a grand ‘Good Morning’ and their exuberant response resonates throughout the church,” said Jean Watts, third-grade teacher.

Father Wack illustrated his commitment to the students in May of 2010 when he walked a marathon (26.2 miles) to raise funds for a new playground. The walk occurred on a treadmill in the school gym where he had interaction with students throughout the day. Following the success of this fundraiser, Father Wack pulled on his work gloves and labored side by side with parishioners, school parents and contractors to install the playground equipment.

Father Wack believes that the school is the largest ministry of the parish. He is also a 1984 graduate of Christ the King School.
Christ the King has an enrollment of 467 students, serving grades pre-K thru 8.

Established in 1904, the NCEA is the largest private professional education organization in the world, representing 200,000 Catholic educators serving 7 million students in Catholic elementary and secondary schools.