WASHINGTON (CNS) — Reaction was largely laudatory to the Supreme Court’s June 18 rejection of a Trump administration bid to revoke Deferred Action for Childhood Arrivals, an Obama-era executive order that allowed young people brought into the country illegally as minors by their parents to stay in the United States.

Under DACA, about 700,000 young people who qualify for the program have been protected from deportation and have been able to work, go to college, get health insurance and obtain a driver’s license. In the meantime, Congress has considered measures to provide these “Dreamers” a pathway to U.S. citizenship, such as the proposed Development, Relief and Education for Alien Minors Act, or DREAM Act.

“We welcome the U.S. Supreme Court’s decision noting that the Trump administration did not follow proper administrative procedures required to repeal the DACA program,” said a June 18 statement from Archbishop Jose H. Gomez of Los Angeles, president of the U.S. Conference of Catholic Bishops, and Washington Auxiliary Bishop Mario E. Dorsonville, chairman of the USCCB’s Committee on Migration. 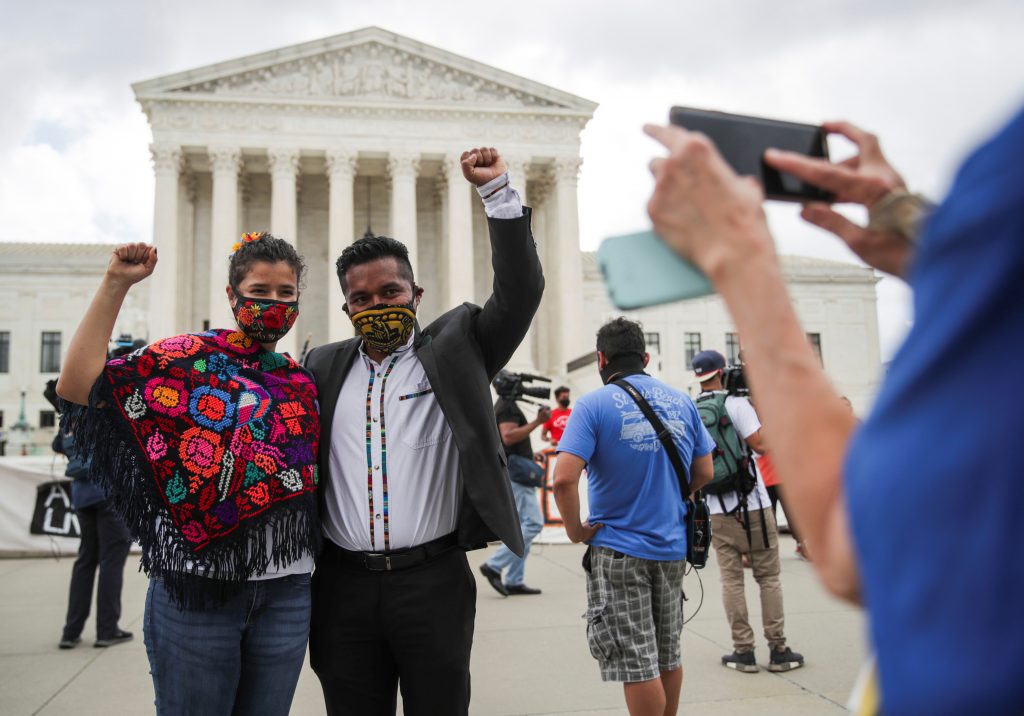 Gabrielle Betances and her husband, Luis Aguilar, a DACA recipient from Mexico, pose for a picture near the U.S. Supreme Court building in Washington June 18, 2020. In one of the most anticipated cases of the term, the Supreme Court ruled that same day against efforts by the Trump administration to end the Deferred Action for Childhood Arrivals program, known as DACA. (CNS photo/Jonathan Ernst, Reuters)

They told DACA recipients: “Through today’s decision and beyond, we will continue to accompany you and your families. You are a vital part of our church and our community of faith. We are with you.” They also urged President Donald Trump to keep DACA intact.

“Immigrant communities are really hurting now amidst COVID-19 and moving forward with this action needlessly places many families into further anxiety and chaos,” they said. “In times of uncertainty, let us remember the teachings of the Gospel which encourage us to be open and receptive to those in need,” quoting from 1 John: “If someone who has worldly means sees a brother in need and refuses him compassion, how can the love of God remain in him?”

“In this moment,” the prelates added, “we must show compassion and mercy for the vulnerable.”

“Just as the church has stood by immigrants and refugees throughout our nation’s history, we will walk alongside our brothers and sisters who have DACA during the legal steps ahead,” said a statement from Bishop Jaime Soto of Sacramento, California, board chair of the Catholic Legal Immigration Network. “This ruling gives a reprieve to DACA holders, but Congress should quickly pass legislation granting these Americans a pathway to permanent residency and citizenship.”

“While we are grateful that today’s Supreme Court decision stops the administration from terminating DACA, this movement is far from over,” said CLINIC Executive Director Anna Gallagher, also in a June 18 statement. “Congress must act now to reflect the will of the people in this democracy and to make official what is true — DACA recipients are Americans and this is their home.”

“Our prayers have been answered!” exclaimed Sister Simone Campbell, a Sister of Social Service, who heads the Catholic social justice lobby Network.

“The Supreme Court’s decision to reject President Trump’s arbitrary and capricious plan to strip protections from DACA recipients was the only just outcome,” Sister Campbell added in a statement. “But they are not yet guaranteed permanent protections. For ‘Dreamers’ to be safe, Congress must affirm that their home is here.”

“The Catholic higher education community stands committed to the individuals in the DACA program who are enrolled at our colleges and universities,” the Association of Catholic Colleges and Universities said, calling the Trump move to end DACA “a moral and a political failure.”

“We pray that today’s decision means they will be able to continue their studies without interruption and that, one day soon, others in their situation will be encouraged to pursue their education goals,” the ACCU said. “Today’s decision is likely not the final word on the DACA program. We call upon our nation’s leaders — and especially Congress — to permanently protect the dreams of all students who seek to realize the promise of our country.” 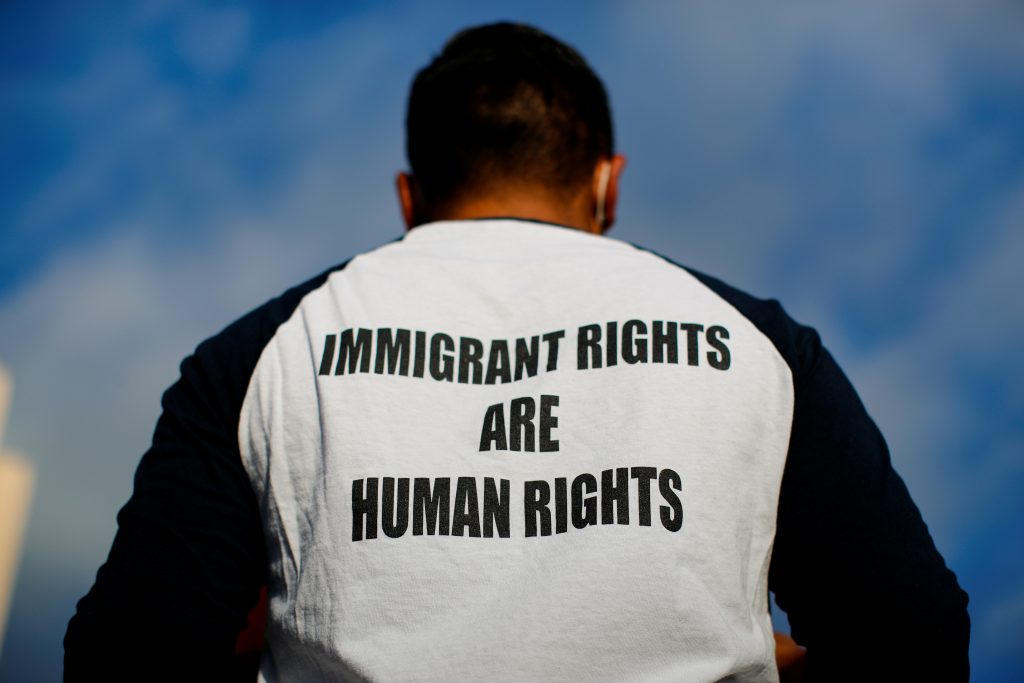 An immigration advocate is seen in San Diego June 18, 2020. In one of the most anticipated cases of the term, the Supreme Court ruled that same day against efforts by the Trump administration to end the Deferred Action for Childhood Arrivals program, known as DACA. (CNS photo/Mike Blake, Reuters)

Said Lawrence E. Couch, director of the National Advocacy Center of the Sisters of the Good Shepherd: “We feel the weight lifted from the shoulders of those young people who have been living in a sort of purgatory and we press Congress for a permanent resolution keeping Dreamers in the United States.”

“These young people have had their lives thrown into turmoil because of hatred and fear. How cruel it would have been to force them out of the only land they have known,” said Sister Maureen McGowan, province leader for the Sisters of the Good Shepherd’s New York/Toronto province. “I pray that they now find peace and welcome.”

“Young people bring such zest to life and work so hard to improve their communities. … We need dreams and today the Supreme Court gave the Dreamers their dreams back,” Sister Francesca Aguillon, the Good Shepherd Sisters’ province leader for the Central South province, said in a separate statement, also issued June 18. Good Shepherd Sister Madeleine Munday, province leader for her order’s Mid-North America province, noted that amid the COVID-19 pandemic the world is enduring, the court decision shows “some bad dreams are coming to an end.”

“We all hope that these young people and their families know how much they are appreciated and welcomed by the vast majority of people living in this country,” she added. “More now than ever, we hope that everyone sees one another as a member of the human family.”

Catholic Extension — which gives aid to the nation’s mission dioceses, which are rural and poor dioceses and those have a small population of Catholics — also weighed in: “In the last several weeks, our nation has come into a greater awareness of our unjust systems that exclude, harm or hinder the God-given potential of some of our people. Among those facing systemic exclusion are our DACA brothers and sisters.”

“The Catholic Church has long affirmed that their lives matter, and that this young generation must no longer be systemically marginalized,” the statement added. “Catholic Extension is proud to invest in them and their future through our various leadership and ministry programs throughout the country.”

Krish O’Mara Vignarajah, president and CEO of Lutheran Immigrant and Refugee Service, called the high court’s 5-4 ruling, written by Chief Justice John Roberts, “an astounding victory for the hundreds of thousands of Dreamers whose lives have hung in the balance for too long.”

“We are thrilled that the Supreme Court ruled in favor of justice for these tenacious young people, and we hope that they are able to breathe just a little bit easier as they go about their daily lives as educators, activists, and essential workers,” she added. “We know the fight is not over, but we’re optimistic that this historic decision will be a fundamental step in creating a path to citizenship for DACA recipients and all those who call the United States home.”

The Rev. John L. McCullough, a United Methodist minister, who is president and CEO of Church World Service, an interdenominational aid, relief and development charity, called the decision “an important victory in the fight for all immigrants.” He said it is part of a “larger movement that demands justice, equity, divestment from racist systems and institutions, and investments in black communities and communities of color.”

“Faith communities across the United States have made their voices heard in support of DACA recipients countless times. We are called to welcome our neighbor,” Rev. McCullough said in a statement. “We recognize the God-given dignity in all human beings regardless of their immigration status.”

“Today’s decision reaffirms that there is no question that home is here for more than 700,000 ‘Dreamers’ across the country” and “sets aside an inhumane injustice by the Trump administration,” New York Attorney General Letitia James said June 18. She estimated 150,000 of those “Dreamers” live in her state.

“America is a country of immigrants; our culture made richer by their contributions and our economy made more prosperous because of their work,” James added. “To our Dreamers, know that you are valued, that you are loved, and that we will always fight to protect you. Si se puede!”The phrase is Spanish for “Yes we can!”

“The Supreme Court did right by DACA recipients today, and it did right by our country. Under today’s decision, these hardworking young immigrants, including an estimated 23,000 Santa Clara County residents, can continue to live, study, and work without fear,” said a June 18 statement by county counsel James R. Williams.

Santa Clara County, which employs some DACA-eligible workers, and a Service Employees International Union local which represents them in the workplace, jointly filed suit in October 2017 to stop the dismantling of DACA, which had been unveiled the month prior.

“DACA beneficiaries are already at a disadvantage. Many were displaced from their home countries at an early age, which research shows can have long-lasting, negative consequences,” said Sandra L. Shullman, president of the American Psychological Association, which supported the Supreme Court decision.

“As psychologists, we are deeply committed to policies that support the mental and physical well-being of all individuals,” Shullman added June 18. “The Supreme Court’s decision in this case upholds those values.”