“Really, really sick in my heart.” That was the reaction of Deacon Mel Tardy to the death of George Floyd, an unarmed Black man by Minneapolis police officer Derek Chauvin May 25.

Deacon Tardy, who serves at St. Augustine Parish in South Bend, became emotional and upset at the widely circulated coverage of Chauvin kneeling on Floyd’s neck as Floyd struggled to breathe.

“Just like everyone else, I think. I was upset with other incidents before that, but this was so brazen and open, in broad daylight. There were so many other people around, and other officers involved who didn’t stop it or who didn’t let other people stop and save George Floyd’s life.” 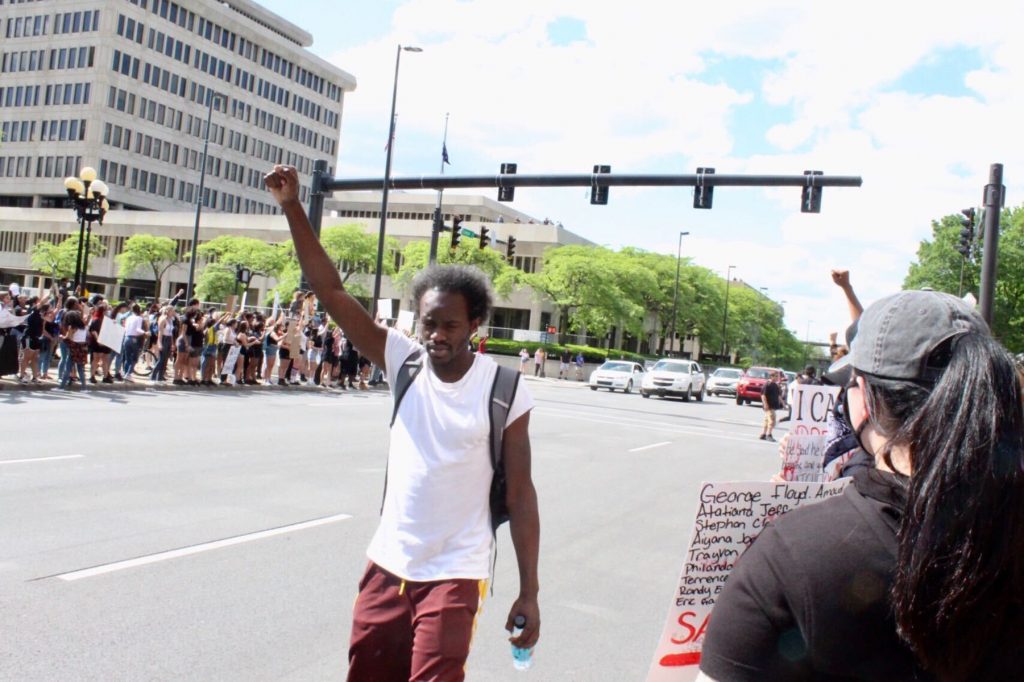 Eileen Bond
A Fort Wayne crowd protests the death of George Floyd May 29. Although the nationwide demonstrations of frustration are controversial, they have given Deacon Mel Tardy a measure of hope in the fight against the sin of racism.

As communities across the U.S. act on the tragedy’s mandate to sort out how to better identify and overcome racism, Deacon Tardy, chairman of the Diocese of Fort Wayne-South Bend Black Catholic Advisory Board and president of the National Black Catholic Clergy Caucus, has gotten “exponentially busier.”

He’s had the conversations before. Deacon Tardy and other BCAB members have been trained by the U.S. Conference of Catholic Bishops to educate others on how to discuss racial issues, and Tardy sat on a panel for cultural competency training for the South Bend Police Department.

He believes that many times when people see a situation of racial discrimination, they think to themselves, “But what can be done?”

The protests and discussions going on in light of Floyd’s death have given him some sense of hope, however. “It’s one thing when you see evil happening and nobody reacts, it’s another thing when you see evil happening and people do react.” A sense of justice has been triggered, he believes, and he’s encouraged by the size of the protests and the diversity they have reflected.

Several instances of deadly injustice against African Americans have happened in the last several years, he noted. But even if the suspect has done something criminal, the encounter shouldn’t end in someone’s death. “When I see things like that, I can see the injustice.”

There are many other moments when officers of the law do their best to treat African Americans fairly and respectfully, but they’re met with resistance from the community that thwarts a positive relationship.

“I do understand the difficulty the police are under. But I say, ‘It’s not you, it’s this narrative of history.’”

Systemic racism isn’t easy to see, he understands. Deacon Tardy likens it to the visibility of the Holy Spirit: “You can’t see it, but you can see the results.” Those results include disparities in the places where whites vs. Blacks live, for example, their access to and quality of health care, the availability of food and even why they’re dying at a disproportional rate from COVID-19.

“They’re ‘essential workers.’ But not because they’re really essential, they just are the ones who have to work because they need to make money.” 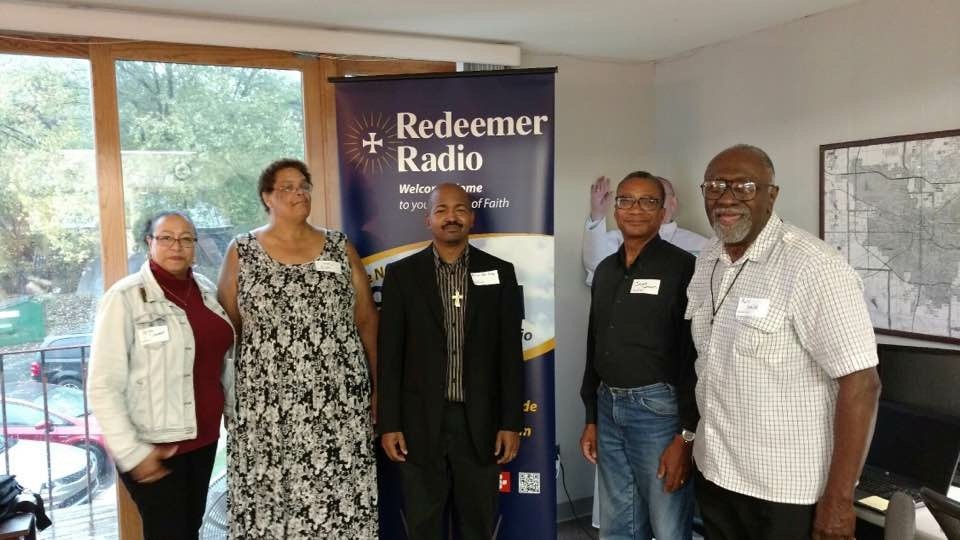 Members of the diocesan Black Catholic Advisory Board have been trained to speak to groups, including parishes, on how to have discussions about race. Some current or former members of the board are, from left, Cheryl Ashe, Wendy Summers, Deacon Mel Tardy, James Summers and Brother Roy Smith. (File photo)

A wound that hasn’t healed

During the last few weeks, BCAB member Wendy Summers feels like she’s suffering from a form of something similar to post-traumatic stress disorder. The trauma that comes from being a Black person who lived through the civil rights unrest of the 1960s, was ostracized by neighbors in her all-white neighborhood and was harassed by police in almost every white community she has lived in; even feeling as “other” in her own church. “It’s exhausting. That’s the one word that describes best how I feel.”

Reading Facebook posts has been the most taxing, especially insensitive posts by some members of the clergy. “Many people don’t even know how hurtful their comments are.” Summers discussed how difficult it is to worship and pray with those who have such little empathy and compassion.

“Many do not know the real history of racism in our country or the Church. They don’t understand white privilege. They don’t want to have a dialogue on the subjects. How can anything change if we don’t dialogue?”

At the same time, Summers recognizes and deeply appreciates some of the acts of kindness she’s seen during this time — kind notes and phone calls received from local friends, people wanting to just check on her and her family and wanting to know how they can help. There was even an anonymous gift left on the front porch. “These are things that make you have faith that things can change.”

A lot of Catholics, at least a lot of African American Catholics, have come to expect “deafening silence” from the Church regarding racial inequality and racism, Deacon Tardy said. “When they’re given that, it sort of affirms this sense that the Church doesn’t care. When things like George Floyd’s death happen, the Church does say something, but there has to be a constant mantra throughout because racism is not a one-day thing. It happens every day.”

The advice he gives to those struggling with the issue is, first and foremost, to go to the Lord in prayer. “Prayer in a sense of an examination of conscience, and with heart to ask ‘Lord, how am I complicit in this social sin of racism?’”

People also need to be clear that racism is a sin, said Summers.

There are many things the Church does to address social justice. In fact, because of Catholic social teaching, it is well-positioned to be a leader on the issue. But that’s not taken advantage of, he said.

“When we talk about Catholic social teaching and we teach social justice issues and morality, is race part of that conversation, or is it only about abortion? Because of the history of this country, race should always be part of it.”

Summers agreed that Catholics are called to discuss the problems of racism so that hearts can be softened. She has thought of that particularly, she said, as she watched historic monuments be toppled during the past week. “Most Confederate monuments were built during the Jim Crow era to intimidate Black people. These monuments belong in museums that deal with the hatred of racism. I don’t want to erase history, but I want it to be a history of truth.”

Prayer and self-reflection also need to be ongoing and intentional, said Deacon Tardy, because racism isn’t something that happens every once in a while.

“The Church teaches that Christians should love each other and that everyone should be treated equally. But saying we should love each other isn’t enough. Love is, ‘I see the injustice, and I’m going to try to do something about it.’ That love is mercy. It involves individuals and the Church saying, OK, we might be complicit in this.”

Members of the clergy can’t talk about the feast days of African American saints, because there currently isn’t one, he said – although there are six candidates, including Servant of God Father Augustus Tolton. But their stories and example could be used in homilies.

Education is also needed in the seminary, he said, to help seminarians begin to see the universal Church by appreciating its already-extensive diversity. “How do we help them see that although it’s the norm for priests to be white, it is not God’s design that only whites be priests. And how do we build an Indigenous priesthood from the communities that are here?” 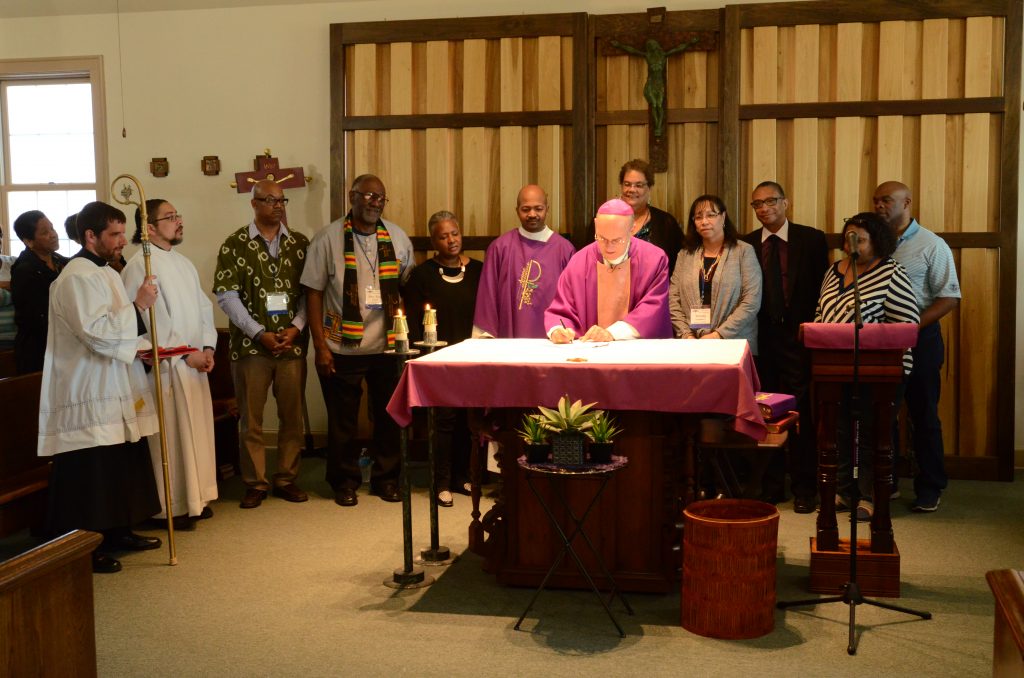 File photo
Prayer, self-reflection and boundless mercy are needed to begin to truly heal racism, say Deacon Mel Tardy and Deacon Frederick Everett of the Diocese of Fort Wayne-South Bend. The Church teaches that Christians should love each other and that everyone should be treated equally, but it also requires action. Above, Bishop Kevin C. Rhoades celebrates a Sankofa Mass with members of the Black Catholic Advisory Board and the African American community at St. Augustine Parish, South Bend.

Deacon Frederick Everett is secretary of the diocesan Office of Evangelization. As the events of the past few weeks unfolded, he said, there has been an evolution in his thinking.

“At the beginning, it was clear there had to be immediate repercussions.” He said when things evolved into mass protests and riots, at first he saw the reactions as somewhat unfortunate, but as he listened more to the voices of Black Americans speaking out about it, it deepened his understanding of just how widespread and pervasive the experience of discrimination really is and how it is looked at dismissively. “I’ve become much more appreciative of just how difficult it can be to be Black in this country.”

The Office of Evangelization’s ministries have engaged with efforts to address racism, including listening sessions, rosaries and discussions at Intentional Discipleship and Alpha gatherings.

Deacon Everett believes the real answer lies inside every person. Certainly, systemic racism exists, he said, but it can camouflage the deeper issue.

“The fact is, you can have the best policies, the best programs, the best laws, but at the end, whether someone is treated with the respect they deserve and the love and mercy they deserve will really be decided in the heart, by people who have experienced the loving mercy of God and then naturally want to express that loving mercy to others — especially to those who are marginalized, those who are discriminated against, those who are belittled in the eyes of society whether that be a Black person, whether that be an unborn child. If they really encounter the love of God in their heart, they will want to radiate that love to others and speak out on behalf of those who are being mistreated or disrespected.”