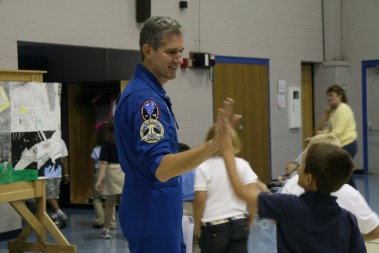 Astronaut Col. Michael Good high-fives a student after an assembly at Queen of Angels School where he presented a talk on his space travels on Sept. 17.

FORT WAYNE — Spirits were soaring out of this world at Queen of Angels School on Sept. 17 when students and staff welcomed a special visitor. NASA astronaut Michael T. Good addressed the assembly with a presentation on space flights that the students will not soon forget.
Good is from Ohio and is a graduate of the University of Notre Dame. Recently retired from the U.S. Air Force, Col. Good has logged over 30,000 hours in more than 30 different aircraft.

But the students of Queen of Angels School were most impressed with the fact that the man in the blue NASA one-piece uniform was a real astronaut who had been in space not once but twice.

Good was a member of the crew of the STS-125 space flight that repaired the Hubble Space Telescope in 2009 and participated in the delivery of supplies to the International Space Station on space flight STS-132, the final flight for the space shuttle Atlantis, in 2010.
Queen of Angels School is a Project READS site, an after- school tutorial program for kindergarten through third-grade students, sponsored by the Allen County Education Partnership (ACEP), which coordinated Good’s visit. Fifth-grade teacher Karen Chesterman, who for many years facilitated a young adult astronaut program at Queen of Angels, is Project READS coordinator at the school and passionate about space. She said, “I’ve always wanted to have an astronaut come. God smiled down on us and gave us Mr. Good!”

Ann Miller, principal of Queen of Angels, was thrilled to welcome Good as well, and said, “We are so blessed to meet a true astronaut.”
In opening the presentation, “No Dream is Impossible,” Good explained to the rapt audience that space was his dream. He encouraged the students to dream big and make those dreams come true. “Think about your own dreams, work hard and persevere. Stick with it and set high goals to turn your dreams into reality,” said Good.

The colonel illustrated his 24 days in space, including more than 29 hours during four space walks, with a stellar slideshow. Students were held spellbound by Good’s description of the space shuttle, his space suit, the launch and how his space walks took place around the bus-sized telescope. The stunning slides provided a panorama of heavenly bodies photographed by Good himself to inspect as well.
The students were especially intrigued with the mathematical information associated with to the space flights, including that it only takes the shuttle, traveling from zero to 17,500 miles per hour, eight and one half minutes to arrive in space. Good explained that the shuttle orbits the earth every 90 minutes offering the astronauts the oppportunity to witness astounding sunrises and sunsets every 45 minutes.

The assembly was also treated to the viewing of a special DVD of Good’s most recent space adventure, replete with “stupid” space tricks performed by the crew, including chasing water bubbles in the weightless cabin of the shuttle. Good took time to answer some well thought out questions from the interested crowd including, “How do you eat in space?” and “What happens if you light a match in space?”
The astronaut concluded his presentation with a word of gratitude for the opportunity to share his love of space and his experiences with the students and staff. He said, “NASA’s mission is not only to explore space but to bring it back … to the students, teachers and communities.” Of his space travels he added, “We have an awesome God. I’ve gotten to see God’s creation from a unique perspective. It’s an awesome privilege to fly in space and I appreciate that I’ve been able to do it.”

Lisa Fabian, parent literacy enrichment program director for the ACEP, who coordinated Good’s visit to the school, closed by informing the school that ACEP will be donating 300 books to Queen of Angels in honor of Good.