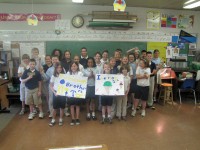 The students of Kurt Homan’s fourth-grade class at Queen of Angels proudly display the signs they used to raise money to donate to the Franciscan Brothers Minor.

FORT WAYNE — “Catholic Schools Celebrate Service” was the theme in all Catholic schools during the 2008-2009 school year. In light of this theme, Principal Marsha Jordan and her staff at Queen of Angels School began a push to increase the idea of service within each student that year. Classrooms planned many different service projects. Some were very large, like a school-wide food drive, and some were small, such as straightening all the books in the church for the weekend Masses after each Friday Mass.

This idea of service continued into the next year, but many teachers weren’t sure if it had really made an impact on the students. One day during the 2009-2010 school year, fourth-grader Daphne Kimes walked into the room and asked the teacher, Kurt Homan, if he had read an article from Today’s Catholic about the Franciscan Brothers Minor that had followed Bishop Kevin C. Rhoades to Fort Wayne. She wanted to help these men.

Homan decided to present the article to his class and read it aloud. The article explained that these men live their lives completely for God. They live as the great St. Francis once lived: they do not get paid for their work, they live with very little and they dedicate themselves to helping others.

Moved by the brothers’ story, the class began to discuss different ways they could help. Homan began to witness the power of the class’s previous discussions about helping others. Twenty-seven fourth graders were ready to do whatever they could to help these men. Students planned lemonade stands, sold popsicles during lunch and sold suckers after school. In all, over $100 was raised in a two-week period.

For the teachers, the most rewarding part of this entire project was that it was completely student driven. This wasn’t organized or planned by a teacher or parent; this was a student asking a teacher to discuss an idea. The students then took the idea and ran with it.