During her childhood, Karen Eckrich remembers dying eggs at Easter time, but not in the way that most American children did. “Growing up, we made Ukrainian eggs around Easter most years. As a kid, most of mine were just squiggles and bright colors,” she said.

These eggs are known as pysanky (pronounced pih-san-KEE). Pysanky date back to 2,000 B.C., when they had pagan connotations. However, the rise of Christianity gave new meaning to the ancient symbols and colors. They can be incredibly elaborate, with bold colors and amazing designs. On April 23, Karen, who is the secretary at St. John the Baptist Parish in Fort Wayne, held a workshop to demonstrate the technique and teach others this art form, her first time having done so. 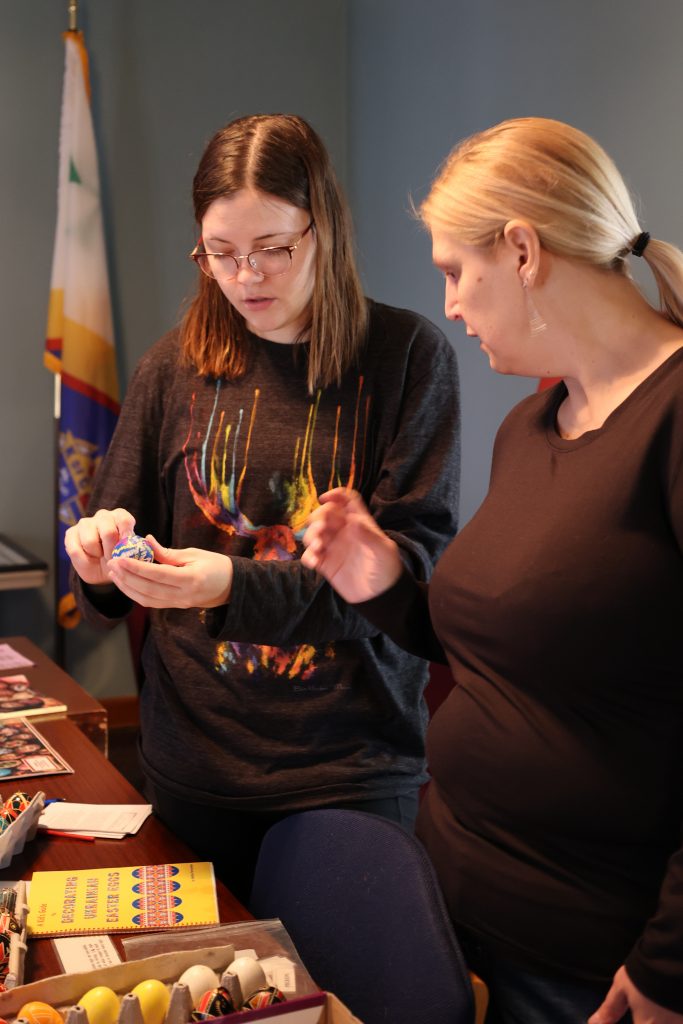 Karen Eckrich, left, learned the art of creating pysanky eggs from her mother, Carol Ann. Here she teaches Tara Bentley how to design her own egg at a workshop at St. John the Baptist in Fort Wayne on April 23.

Karen learned the craft from her mother, Carol Ann Eckrich. “When I was a child, I saw a picture of a pysanky in an ‘Ideals’ magazine. I had no idea what it was or what it took to create something so colorful and intricate, but knew that someday I wanted to make one,” Carol Ann said. It wasn’t until 1991 that she finally had the opportunity to do so.

As an academic advisor at Purdue University, she worked with the foreign language department where a Russian professor offered a pysanky egg workshop. She said, “I took a day off of work to make sure I could spend the whole day learning the craft and was immediately hooked. I enjoyed the challenge of the complicated process and especially taking the wax off at the end to reveal all of the colors underneath.” 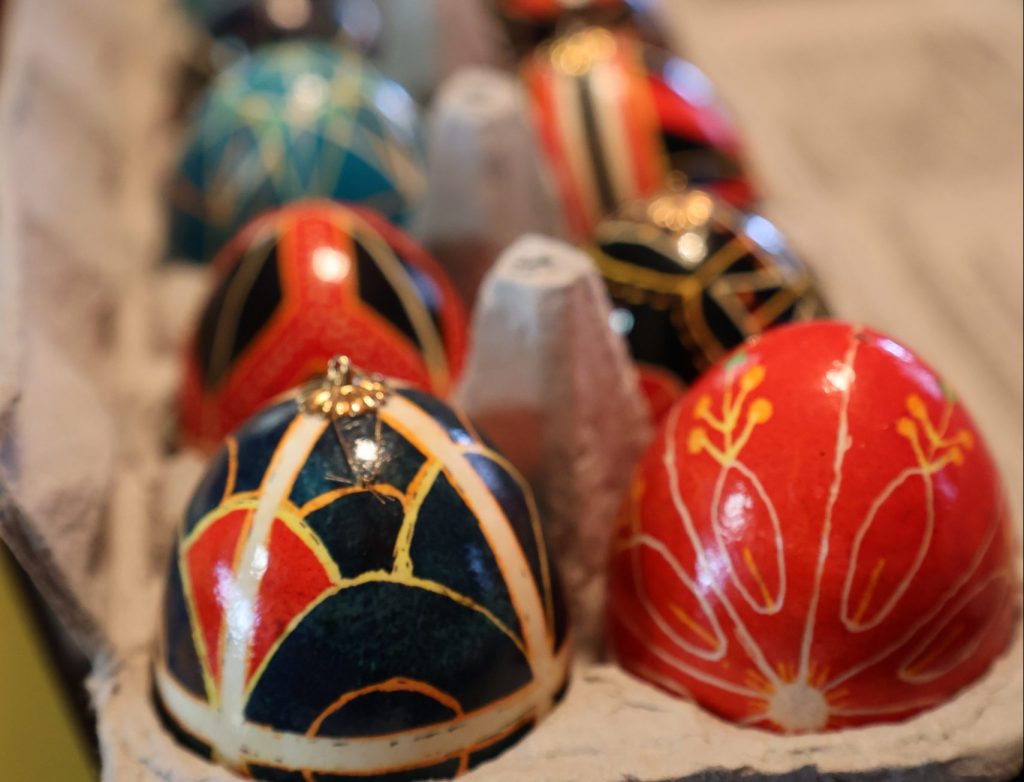 Photos by Jennifer Barton
Carol Ann Eckrich has created numerous pysanky eggs since 1991, when she participated in a workshop at Purdue University to learn how to make the Ukrainian Easter eggs. When finished, she drains the egg from the shell and sprays them with lacquer to maintain their colors.

Two years and dozens of eggs later, she began earning the nickname “The Egg Lady” at the Indianapolis Children’s museum, where she spent nine years teaching children how to create the beautiful eggs. To date, she believes that she has taught hundreds of people how to make them.

All the symbols traditionally used on pysanky eggs have special meanings. Triangles symbolize the Trinity; grapes mean a good harvest and the growing Church. The sun is the most widely used and symbolizes life and light. There are many more. Colors also have significance – white means purity, red is for hope or passion, black is the darkness before dawn.

The process for making pysanky eggs is time-consuming. Carol Ann estimates that a relatively simple egg could be created in one or two hours, but one with greater detail could take six or seven.

It takes so long because each layer of color requires detailing with a tool called a kitska, which in essence is a tiny metal cup with a funnel that is roughly the size of a pencil point coming out of the bottom. This cup is heated over a lighted candle, filled with beeswax, then heated again to melt the beeswax. The beeswax flows out of the funnel as it is “painted” along the egg’s surface in whatever design the creator chooses. Then the egg is dipped into an inedible aniline dye. 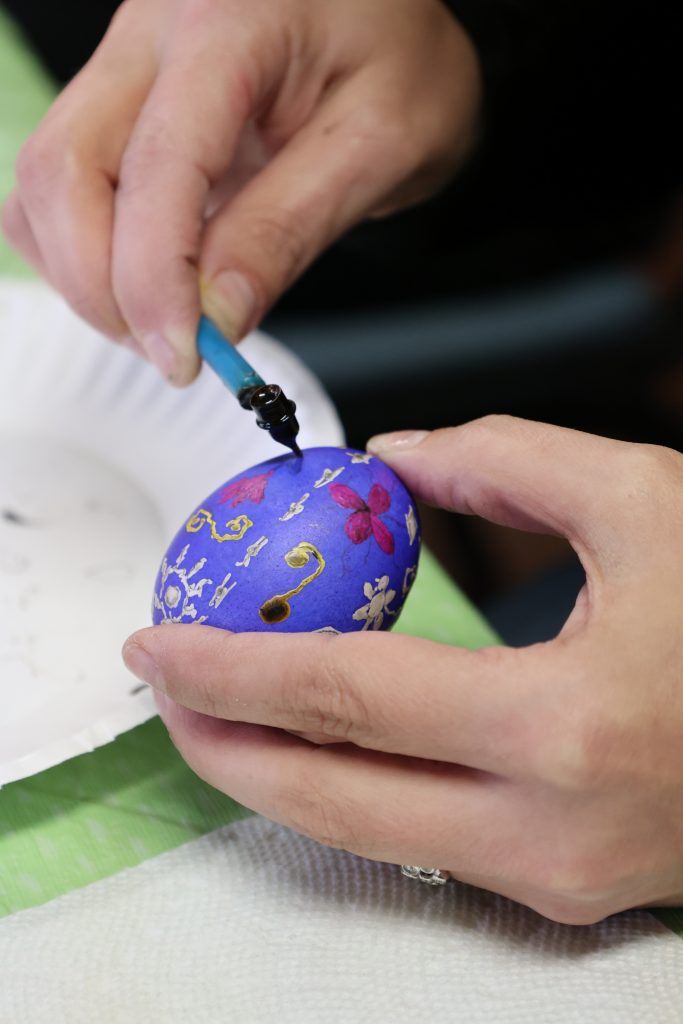 The wax forms a seal that will keep those specific designs in one particular color. For example, covering a yellow layer with a wax flower will ensure that the flower remains yellow at the end of the dying process. With each wax layer that is added, the egg is dipped into a progressively darker color (yellow to green to pink to blue, etc.). After the final color is achieved, the wax layers are removed by heating the egg close to the candle’s flame and wiping away the melted wax.

Through the years of plying her hobby, Carol Ann has probably crafted hundreds of eggs for herself and others, on anything from chicken eggs to a tiny parakeet egg. She even has an ostrich egg waiting to be decorated.

Her skill has grown over time. Karen enjoys making pysanky eggs, but admits, “I love the process, but still have never come close to creating what my mom is capable of. They take a lot of patience, a steady hand and the ability to plan out the whole thing and know what you want to end up with.”

Although the Eckriches are not ethnically Ukrainian, their roots do go back to Czechoslovakia, so touching a piece of Eastern European culture has special meaning for Karen. The workshop she hosted also gave her and others a way to connect with the Ukrainian people who are suffering under the strains of war and fighting desperately to defend their homeland.

Supporting Ukraine was one reason Priscilla Harless chose to attend. She had not heard of pysanky eggs before, but the bulletin announcement that Karen wrote “intrigued” Harless.

“It touched me in such a way that I thought I’d try it,” she said. With the excess money raised going to Catholic Relief Services’ Ukraine aid, it felt like another way she could help those in Ukraine aside from simply praying for them.

In addition to Harless, two other women came to the workshop. All three are members of St. John the Baptist and they enjoyed their time there, one of them stating that it certainly could be a meditative craft. Attendee Olivia Peterson commented, “I want to do this all day.”

Tara Bentley came because she loves arts and crafts. In the fall, she had taken a candle painting class at the parish and now helps customize baptismal candles for the children who are baptized there. She said she would definitely do this again. In fact, she said, “I’m thinking about how to do it differently in the future.”

And she could have an opportunity to work with Karen and others again to make pysanky eggs. Karen will host another workshop on May 14, from 9 a.m. to noon at the parish. The cost will again be $10, with any excess funds raised after covering the cost of supplies going to Catholic Relief Services. Space is limited, so registration is required. Since lit candles are used in the process, the age limit for attendees is 10 and older. For those interested in learning how to make these extraordinary and stunning eggs, email [email protected] or call the church office at 260-744-4393 to register.