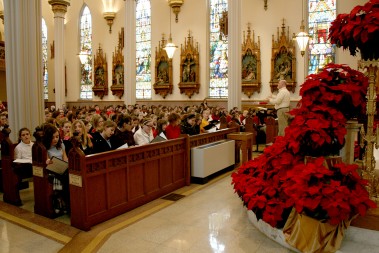 The Pueri Cantores choir members from the Fort Wayne area Catholic schools practice singing historic Catholic liturgical music at the Cathedral of the Immaculate Conception in Fort Wayne on Jan. 13, under the direction of Michael Dulac. They will join their counterparts from the South Bend area to sing at the Indiana Festival Mass at the Basilica of the Sacred Heart of Notre Dame on March 16.

An assembly of musically adept youth from around the Diocese of Fort Wayne-South Bend are taking St. Augustine’s celebrated adage, “He who sings, prays twice,” as truth this year as they participate in an exciting new program. Pueri Cantores, latin for “young singers,” has been introduced to the diocese through a collaboration of the Office of Worship and Catholic Schools Office.

Brian MacMichael, director of the Office of Worship, with the support of Bishop Kevin C. Rhoades, along with Dr. Mark Myers, superintendent of Catholic Schools, organized a call to all diocesan school and parish music teachers and those home schooled late last fall to identify the most musically talented students, age 9-18, who might audition for the Pueri Cantores program. Each school or parish was allotted 10 seats in the special choir that would gather locally for practice as well as participate in four regional practices.

The young vocalists will sing a more classical repertoire of traditional liturgical music reports MacMichael. Latin Mass parts as well as choral pieces in English will be mastered. And adds Myers, the performances not only introduce the students to the rich historic music of the Catholic tradition, but supplements their fine arts area of study as well.

Pueri Cantores is a century-old practice established in France in 1907, according to its website www.puericantores.org. A special boys’ choir was formed there to sing during liturgy. After faltering under the pressures of World War II, Pueri Cantores was reestablished in 1944 as an international organization led by Father Fernand Maillet.

In 1947, the first international Congress of the federation was held in Paris in which 90 European choirs participated and by the mid ‘60s Pueri Cantores was recognized as a Church movement. With the Second Vatican Council, girls’ choirs were permitted to participate and currently there are over 40,000 youth from 35 countries who sing in Pueri Cantores.

MacMichael reports that Pueri Cantores is sponsored in the U.S. by Cardinal Francis George, archbishop of the Archdiocese of Chicago, with participating states hosting concerts with musicians from across the state in one diocese. This year will see the inaugural performance of the youth of the Diocese of Fort Wayne, with hopes of broadening the program to statewide in the future.

Each group of 10 has been practicing the liturgical music at their own school. The elementary-aged singers then join their high school counterparts for practice in their feeder high schools in both Fort Wayne and South Bend.

Myers is amazed at the group’s effort and says, “It’s just beautiful! Their progress is unbelievable. It’s new but we’re creating a culture that’s good for catechesis and getting the students into the music tradition.”

He is especially pleased that the high school students are taking a mentoring role with the younger students. And another program plus, he says, is, “It’s a chance for the kids to visit the high schools.”

The groups from both cities have practiced in their respective cathedrals and plan to practice together before the final performance on March 16.

Karlene Krouse, head of the performing arts department at Bishop Luers, has been involved since the inception of the program and says, “What’s neat about it is every school has the same participation level.”

And there are long-term benefits to participation as well. “As the kids grow up and go to college they go into the Newman Centers. This is the training ground for future cantors and Church musicians,” Krouse says, adding, “It is inspiring for these children … their spirituality will be developed because of this endeavor.”

The Pueri Cantores will worship with the great liturgical music of the Catholic Church during the Indiana Festival at the Basilica of the Sacred Heart of Notre Dame on March 16. The festival of songs will precede the Mass, which will be celebrated by Bishop Kevin C. Rhoades at 3 p.m. The Pueri Cantores will be conducted by Paul French. Due to limited seating the performance will be by invitation only, but the Office of Worship hopes to have a recording made of the festival and Mass.

MacMichael hopes to coordinate other special events in the diocese at which this company of inspired young vocalists might perform, as well as future opportunities to sing in Rome with students from around the world.