One of man’s deepest and most enduring questions is this: Can the existence of an unseen and mystical God be proven? Bishop Kevin C. Rhoades and Dr. Lewis Pearson, philosophy professor at the University of Saint Francis sought to answer that question on “Truth in Charity” with Kyle Heimann, which aired on July 1. 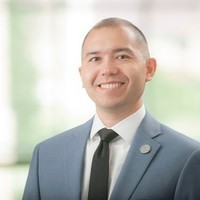 Dr. Pearson has taught ethics and philosophy at the University of Saint Francis for many years and is a former-atheist-turned-Catholic. His own search for truth has gained him a significant knowledge to defend the existence of God. Bishop Rhoades also admitted that as a college student, he himself struggled with whether or not he should believe in the existence of God. He stated that “what tipped the balance for me … were the five proofs, or the five ways, of St. Thomas Aquinas.” 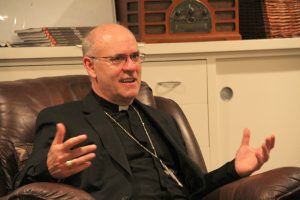 Many arguments for the existence of God come from the middle ages, but the ideas have been put forward by people seeking the truth of God long before that, to the beginnings of Christianity and even centuries earlier in pagan cultures. Bishop Rhoades and Dr. Pearson spoke about arguments made by St. Augustine, St. Anselm and St. Bonaventure, among others.

Proofs, as Dr. Pearson points out, “are something that we’ve had from the beginning of the time that the Church fathers have been writing about the faith, showing that the god of the philosophers — the ancient Greeks — just so happens to be the God of Abraham, Isaac and Jacob.”

He continued, “The problem with proofs for today is when people say you can’t prove these things, people have a different understanding of what they think a proof is than what a proof actually is.” He goes on to explain that a philosophical proof will not necessarily convince everyone who hears it; rather, “a proof works if its premises, with the use of the rules of logic, actually support the truth of the conclusion.” Using the idea of a mathematical theory, Dr. Pearson pointed out that though the complicated theory is valid, a child who doesn’t understand mathematics would not be convinced of its truth.

The idea that faith might seem to conflict with both science and reason came up a couple of times during the discussion. Dr. Pearson said, “I think when you talk about proofs, there’s this false dichotomy that we have today from pop culture and maybe bad media coverage that says that science and faith conflict.” He believes that many people will deny the existence of God out of a desire to be taken seriously as a scholar or to be seen as a rational person but said that there is no conflict between science and faith. Using the example of Father Georges Lemaître, the Catholic priest who first proposed the “Big Bang theory,” Dr. Pearson demonstrated that an understanding of science and faith can work hand in hand.

In fact, understanding the universe is one of the ways to prove God’s existence. According to Dr. Pearson, cause-and-effect types of reasoning fall under cosmological arguments. He used an analogy comparing creation to a row of dominoes falling over onto each other, but the ultimate cause points back to the finger that pushed the first domino.

Similarly, the odds that a universe built to sustain abundant forms of life would have formed by chance are astronomical, since any minute change could have caused immense differences in the laws of nature, preventing the formation of life on Earth. Dr. Pearson explained off-air that those odds would be like flipping a coin. “You flip a coin, it’s 50-50 chance it’s heads or tails, but that’s not actually the odds. There’s a small chance it will land on its edge. But if it lands on the edge of its edge, that is impossible. It doesn’t matter how many coin flips or how many coins one gets, the odds never become probable, or even reasonable, that any coin on any flip will land on the edge of its edge and stay that way.” Proofs for God’s existence that focus on the sophisticated nature of the universe are often called fine-tuning arguments — or arguments from design.

Faith also does not need to conflict with reason, as Bishop Rhoades pointed out. “Saint Paul wrote in his letter to the Romans that God can be known through the things He has made. One can come to the knowledge of God through the world, through creation. Saint Thomas Aquinas likewise taught that we can know from reason that there exists a reality which is the first cause and final end of all things, namely, God. Through the use of reason, we can come to know that God exists, but our knowledge of Him through reason is quite limited. It is through God’s revelation of Himself to man that we come to know, for example, that He is Triune, that He is Father, Son, and Holy Spirit. God has revealed His mystery to us by sending us His Son.”

While many of the terms discussed may have sounded perplexing, Dr. Pearson assured listeners that proving God’s existence need not be complicated. For someone who does not particularly have a background in philosophy, Dr. Pearson stated that he would simply give historical arguments in the person of Jesus Himself. “How else can you explain that a Man has all these followers who died for the sake of someone they say came back to life. You don’t do that if you’re a fraud; you don’t do that if you’re trying to cheat people, if you’re trying to hide a lie.”

While all these arguments are good and valid, both Bishop Rhoades and Dr. Pearson stress that the best way to prove God’s existence is by living as Christlike as possible; by loving others and supporting them when they are struggling within their own lives. These arguments are meant to be tools for evangelization, not for winning debates; meant only to be used when someone is open to the Spirit and prepared for a rational discussion.

For those who want to go deeper into the proofs of God’s existence, Dr. Pearson recommends a book by Christian theologian and writer C.S. Lewis titled “The Problem of Pain,” stating that C.S. Lewis is very accessible to the average reader. Bishop Rhoades recommended Peter Kreeft’s “A Shorter Summa” and “A Summa of the Summa,” edited by Kreeft, both of which are more digestible versions of St. Thomas Aquinas’s weighty “Summa Theologica.”

To listen to the program on Redeemer Radio visit https://www.redeemerradio.com/askbishop/