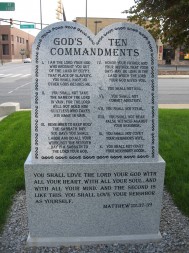 The Ten Commandments memorial on Cathedral Square is located at the corner of South Clinton and Jefferson Boulevard. The project was supported in spirit and financially by 11 Knights of Columbus councils and private donations.

Active opposition to the Ten Commandments began with the time of Moses and has been freshened up by various individuals and groups ever since.

In this country, the cry of outrage begins with “separation of Church and state” and shows signs of a pathological fear of an improvement in human behavior if the commandments are displayed in public … and, as often the case, attempts at suppression increase publicity.

Recently, increased attention to the commandments began in Kansas City, Mo., when the ACLU threatened the city with a lawsuit because a commandments display was on the courthouse lawn. The suit was avoided when the display was moved nearby to a Catholic church.

This prompted a local businessman, John Menghini, to wonder why more churches didn’t display the commandments and decided to promote the idea. His proposal was encouraged by the Kansas City hierarchy and in 2004, “Project Moses” was born.

In time, the commandments displays appeared in 22 states, with considerable help from the Knights of Columbus, and an article about Project Moses was published in a 2006 issue of Columbia, the Knights’ monthly magazine.

This article sparked the interest of Gene Rose who was wintering in Sun City, Ariz., and took the commandments display idea to the pastor at St. Clement Church, who encouraged Gene Rose to seek help from the Knights of Columbus there. And with financial support from the Knights, Project Moses added one more site.

Three years later, Rose wondered why Project Moses couldn’t be brought to Fort Wayne. Once more he began at the parish level and as it advanced for the bishop’s approval, the diocese was in transition; waiting for a new bishop to be named, so the proposal went on hold and eventually was approved by Bishop Kevin C. Rhoades.

The bishop’s approval was the brightest green light for the project, but now money was needed, so Gene Rose sought the support of his brother Knights at Father Brandon Council in Fort Wayne. There, under the chairmanship of John Murray, a personal appeal to each Knight in the 11 Fort Wayne councils was made and on the spectacular occasion of Faith, Family and Fatherhood festival in August, 2012, on Cathedral Square in Fort Wayne, the Ten Commandments monument was blessed and dedicated by Bishop Rhoades.

A close friend of Gene Rose, John Kuhn, whose daughter is married to Gene’s son had an active “behind the scenes” part in the festival. He repaired and repainted the St. Joseph statue, which symbolized the fatherhood theme of the festival. The repair was a major job and required Kuhn to fashion an entire new hand and staff for the statue, which was surrounded by flowers and carried aloft in a majestic procession from the Cathedral of the Immaculate Conception to Headwaters Park in Fort Wayne.