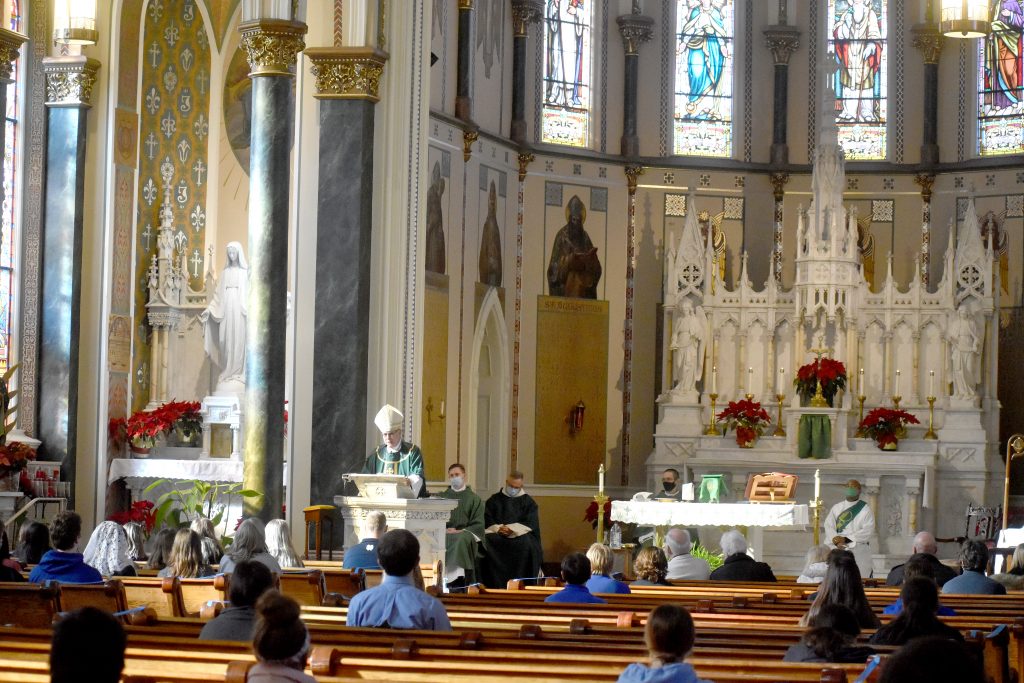 In his homily, Bishop Rhoades told the story of a wide receiver in football being interviewed on TV.

“He said to the reporter: ‘I have never been caught directly from behind by a player on the opposite team.’ The reporter was surprised and asked him: ‘How do you account for that, since you are not that fast and most of the defensive players on the other teams are quite fast?’ The player answered: ‘After I catch that football, I don’t break my stride. I keep my eyes fixed on the goal line, and I just keep saying to myself, “I’m going to get there! I’m not going to let anyone stop me!” We need that attitude in our Christian lives – that kind of determination. We’re going to keep our eyes fixed on the goal line. That’s important for the pro-life movement as it was for the civil rights movement. It’s actually important for our whole Christian life and all our works for the Kingdom,” the bishop said.

He underlined the exhortation in the day’s reading from Hebrews: “do not throw away your confidence… You need endurance to do the will of God and receive what He has promised.”

“The virtue the pro-life movement needs today is endurance,” Bishop Rhoades continued. “We can’t give up in our fight for justice, for the right to life of our unborn brothers and sisters. In the face of the many challenges the Church faces, … we must not allow ourselves to become demoralized or discouraged by cultural or political setbacks.”

“Endurance isn’t grim and passive waiting. True endurance is joyful and active,” he continued. “Like the civil rights movement, the pro-life movement “demands commitments that require perseverance, most importantly, the commitment to love. That’s what it’s all about: to love one another, to love those who are suffering, to love those whose lives are at risk, to pray for changed hearts for those who support abortion…The Lord is always with us, so we should never lose heart.” 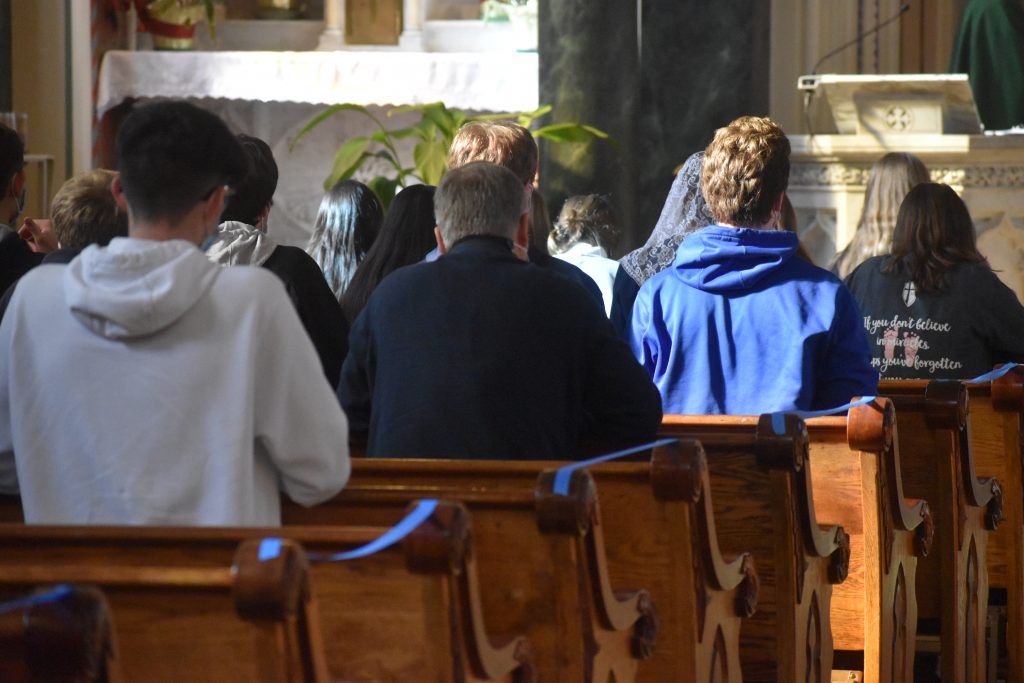 Worshippers Mark and Louann Kensinger from St. Monica Parish, Mishawaka, identified with the theme of endurance for the long haul. They have been standing on street corners during the annual Right to Life Michiana protest for many years.

“We’re worried about our country,” said Louann. “What does it say about us when we throw away God’s greatest gift?”

Anne Oliva from Queen of Peace Parish, also in Mishawaka, has been active in the pro-life movement all her life. She remembers her father manning a Right to Life booth at the 4-H fair.

“Nothing else is more worthy to fight for. How can anybody think killing right up to the moment of birth is okay?” she asked. She and friend Rachel Myers said they saw themselves wearing out the knees of their pants in the coming months.

A dozen Congregation of Holy Cross seminarians attended the Mass as well. Brother James Walters said he was excited that even though he couldn’t go to the national march this year, he was able to join his fellow seminarians in showing support for life locally. 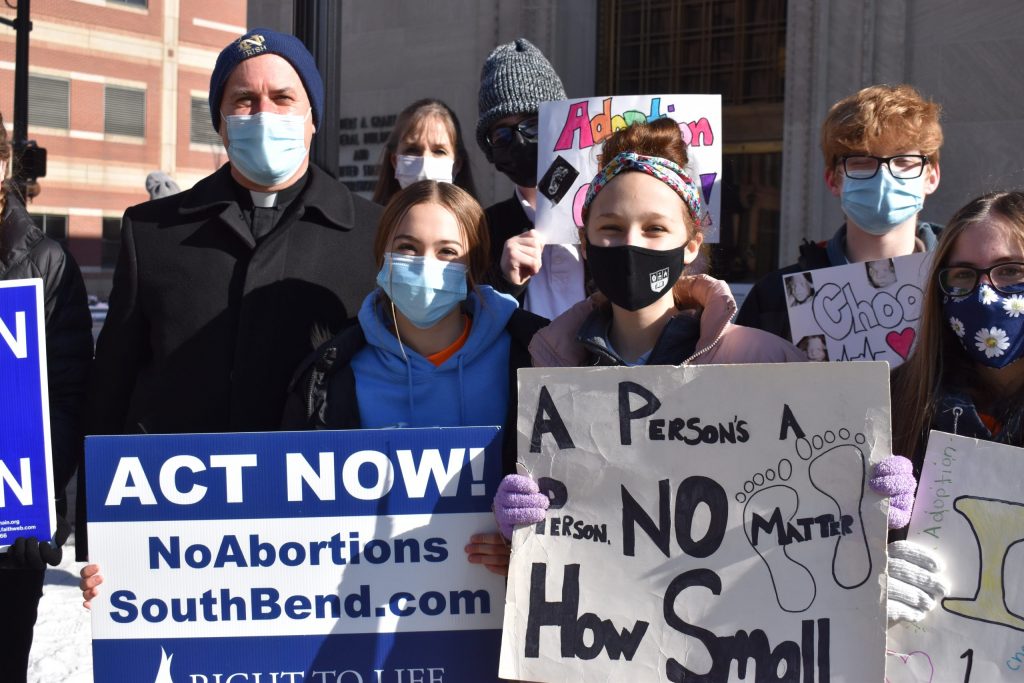 Jennifer Miller
Bishop Kevin C. Rhoades stands with eighth grade students from St. Matthew Cathedral School as they peacefully protest the 1973 Roe v. Wade ruling Jan. 29 in downtown South Bend. The Supreme Court decision that legalized abortion at all stages of pregnancy is remembered across the U.S. each year near the anniversary date of the decision.

After the Mass, Bishop Rhoades and most of the worshippers — from 48-year veterans of the movement to toddlers — headed to the federal courthouse downtown to hold up pro-life signs and encourage honks from passing motorists.

Many of the signs were handmade. “As a former fetus, I oppose abortion,” proclaimed Joseph Towers’ sign. The message from Rachel Myers, from St. Monica, was, “Unity Begins in the Womb.”

Marian student Monica Kloska’s sign listed a host of pro-life issues, including immigration reform, mask-wearing and opposition to the death penalty. Another sign pointed out that pro-science is pro-life.

St. Pius X, Granger, parishioner Sandra Schneider needed her walker at the march, but she still came to support life on the cold afternoon. Kathy Downey, also from St. Pius, brought her nine children. A homeschooling mother, Downey said she was grateful for the opportunity the Mass and rally presented.

“This is something we can do to help support the culture of life, to pray and to come out and be present.” She hoped to teach her children to be part of the change they want to see. 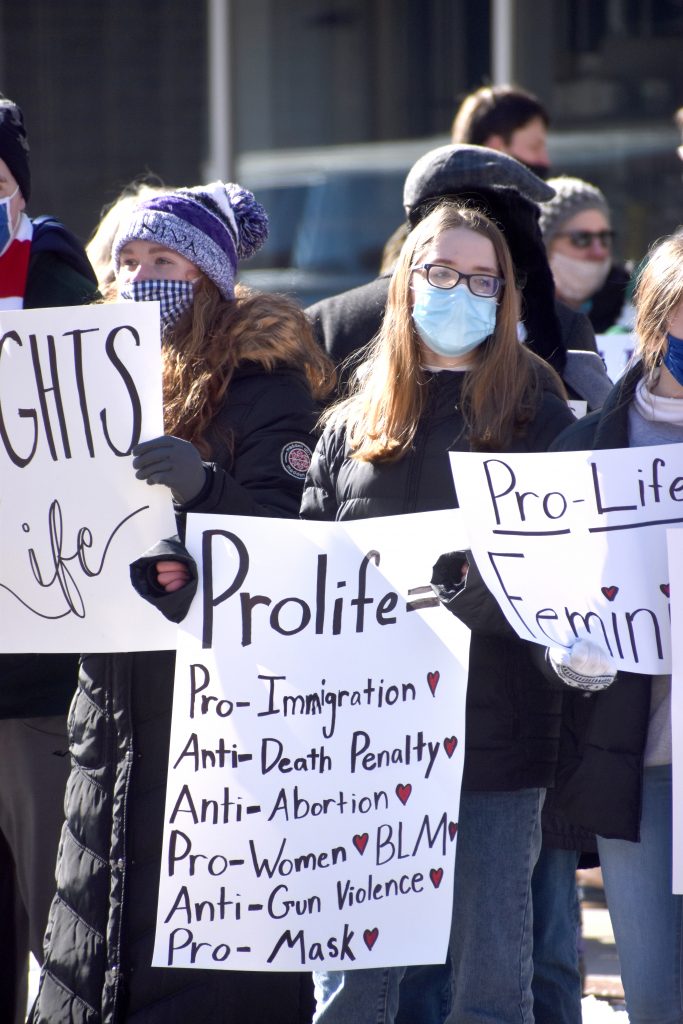 Marian junior Monica Kloska stands up for all life with her homemade sign at the 2021 Right to Life Michiana gathering in front of the federal courthouse in downtown South Bend. Her sister, mother and cousins joined her at the 400-person event to support life in all of its stages and abilities.

Many young people were among the 400 people at the rally. Seventh grader Joseph Heckaman said he was there because, simply, “This needs to stop.”

Ben Horvath agreed. “Life is the most fundamental right.”

Colette Cline, president of Marian High School’s pro-life club, appreciated the symbolism of the annual event but pointed out that a pro-life commitment should be lived out every single day.

The cancellation of the National March for Life event this year was disappointing to many of the students, who said they had hoped to show President Biden the power of the pro-life movement. Instead, many of them came to the South Bend protest. At the same time, however, grade school students who sometimes participate in the local march for life were unable to attend this year because the pandemic halted all field trips.

Instead, Right to Life Michiana organized a virtual rally. The young students received a virtual tour of the rally, heard a talk by Marian teacher Sister Marie Morgan and had a chance to ask questions.

Because the St. Joseph County and Elkhart County right to life organizations merged in 2019, Jackie Appleman, executive director of Right to Life Michiana, helped organize events in two counties over the weekend. Pointing out that 61 million Americans have died since Roe v. Wade, in South Bend Appleman underlined the organization’s educational efforts throughout January. “So many people have no idea Roe v. Wade made abortion legal through all nine months of pregnancy. We want to let the community know all of us oppose this, that we demand protection for every life from conception to natural death. Abortion isn’t wanted or needed in Michiana. We support women here.”