WASHINGTON, D.C. (CNS) – Although many pro-life groups immediately reacted positively to the news that the majority of Supreme Court justices seem set to overturn the court’s Roe v. Wade decision, some tempered their reaction with a continued call for more advocacy while others kept a wait-and-see approach until the court issues its opinion in the weeks ahead.

Some Catholic bishops likewise kept their response in check, but acknowledged the work done on the grassroots level by pro-life activists.

For example, hours after the draft of the court’s opinion was published by Politico on May 2, San Francisco Archbishop Salvatore J. Cordileone tweeted: “Tonight I am thinking of all the years of hard work by pro-life people of all faiths and none. Years and years of patient advocacy, help for unwed moms, political engagement and more.”

The next day, Archbishop Bernard A. Hebda of St. Paul and Minneapolis said in a statement that he will “comment when the Supreme Court releases its official ruling. No matter the court’s decision, the Catholic Church will continue to work toward building a culture of life and supporting women and their children,” he said.

National Right to Life, an advocacy group that has long fought against abortion, similarly said it “agrees with the statement of Mississippi Attorney General Lynn Fitch, who said, ‘We will let the Supreme Court speak for itself and wait for the Court’s official opinion.’”

Other groups were not so cautious. Texas Right to Life said it was encouraging news that “Roe soon may be gone. Yet new attacks on life will emerge.”

In its May 2 statement, the group called its supporters to further action saying: “Already, abortion advocates are calling on Congress to ban states from passing pro-life laws.” 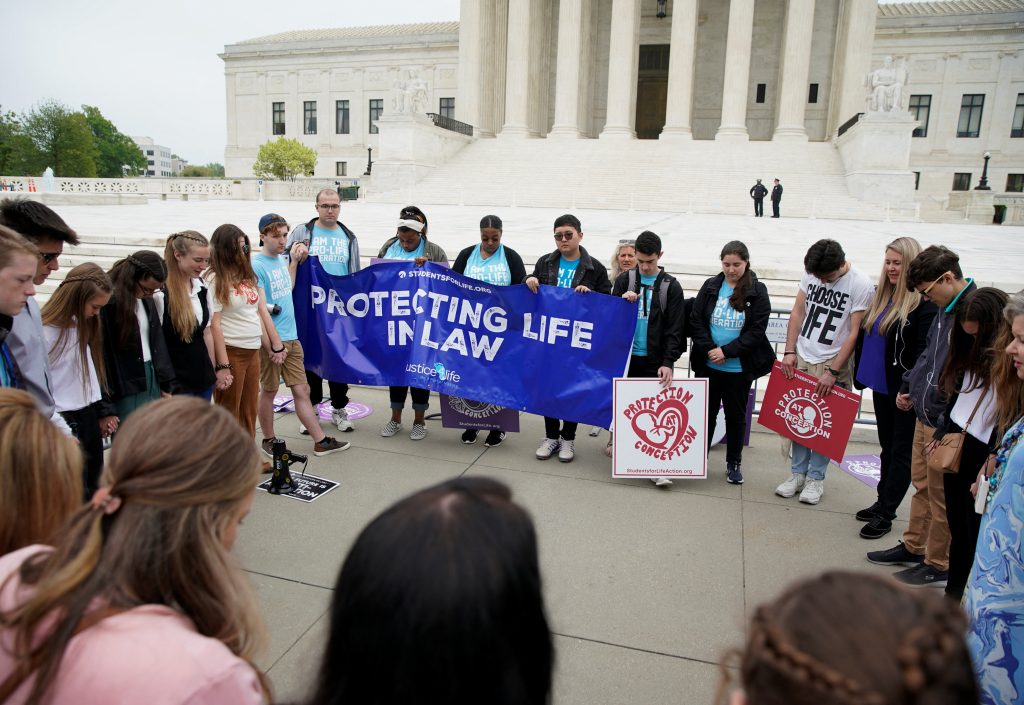 Abortion demonstrators are seen outside the U.S. Supreme Court in Washington May 3, 2022, after the leak of a draft majority opinion written by Justice Samuel Alito preparing for a majority of the court to overturn the landmark Roe v. Wade abortion rights decision later this year. (CNS photo/Elizabeth Frantz, Reuters)

“If and when the court overturns Roe, the pro-life movement must defeat attacks such as these and build a culture that values preborn children and pregnant mothers.”

Kristan Hawkins, president of Students for Life of America, likened the potential overturning of Roe v. Wade as the beginning for the antiabortion movement.

The previous day, her group sent a letter to all the Republican members of Congress urging them to back a nationwide “heartbeat bill,” banning abortions at six weeks of pregnancy. Hawkins, and nine other antiabortion leaders, emphasized that the 15-week ban at stake in the Dobbs v. Jackson Women’s Health Organization case before the court did not go far enough.

“If we are not focusing on limiting early abortions, we are not really addressing the violence of abortion at all,” Hawkins wrote in the letter.

After the court’s draft decision was leaked, she told The Washington Post: “We are on the precipice of a whole new America.”

One thing many groups said they were not happy with was that the opinion was leaked to a news outlet. 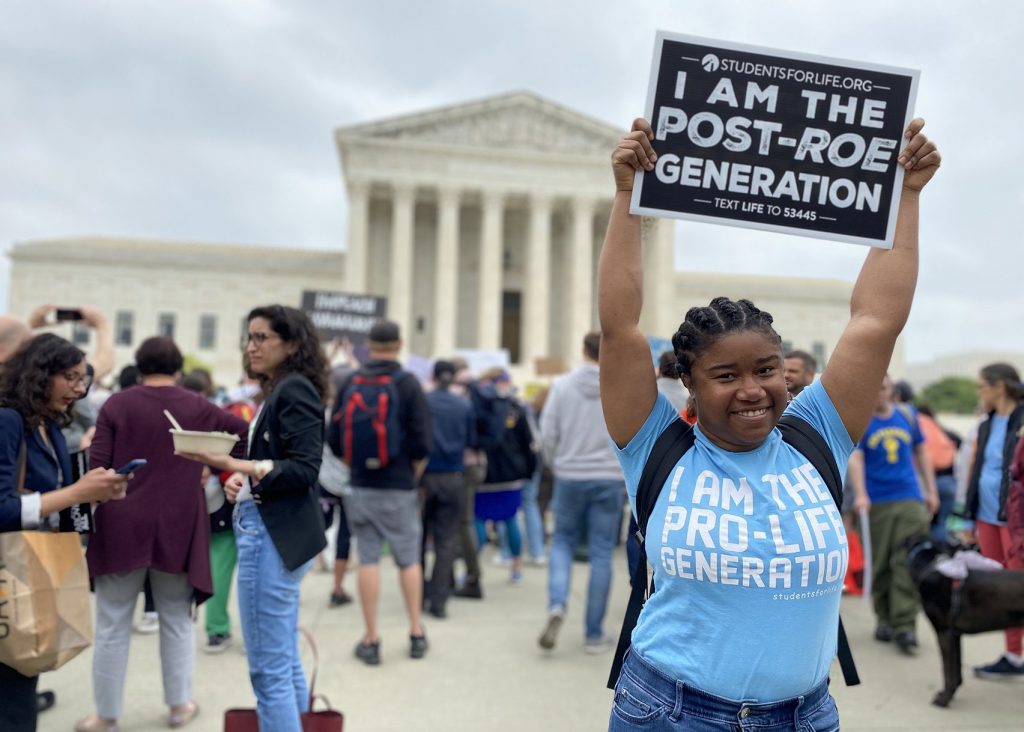 Norvilia Etienne, of Students for Life, holds a sign outside the Supreme Court of the United States May 3, 2022, the day after a draft of the court’s opinion was leaked signaling that the court was leaning toward overturning Roe v. Wade. (CNS photo/Rhina Guidos)

Dennis Poust, executive director of the New York State Catholic Conference, said the leak was a breach of trust and “an attack on the integrity of the Judicial Branch of government.”

“When our highest court cannot operate free of political interference or intimidation, it serves as a stark example that nothing is sacred anymore. While we fervently pray for legal protections of unborn children, we will not dignify the goals of the leaker by commenting on the contents of the draft document.”

The California Catholic Conference said in a May 3 statement that the leak of the opinion draft “triggered the governor and California legislative leadership to announce its intent to create a California constitutional amendment to protect the right to abortion. This will destroy lives, families and significantly limit the ability of the Catholic Church in California to protect the unborn.”

The conference said this was moment for the Church and California Catholics to “engage with their communities, actively and publicly oppose this amendment.”

Right to Life Michigan expressed “cautious optimism” about the leaked draft and said its mission won’t change if Roe is overturned.

“We’d have a complete abortion ban in our state, but there are a lot of different moving parts with different groups and with a governor who is trying to invalidate this law. Our focus would be on those efforts and making sure we are fighting against them and have as many people on our side fighting against them as well,” Anna Visser, director of communications and education for Right to Life Michigan, told Detroit Catholic.

She warned pro-life advocates not to celebrate too early, considering the official opinion hasn’t been released and the final version might not reflect the views of Justice Samuel Alito, who authored the draft opinion.

She also noted that the work of pro-life advocacy goes beyond abortion.

“As a pro-life organization, we have to protect the vulnerable, the elderly, the disabled, the unborn,” she said, adding that the focus is “on the marginalized and those discriminated against.”

Contributing to this report was Daniel Meloy, a staff writer for Detroit Catholic, the news outlet of the Archdiocese of Detroit.