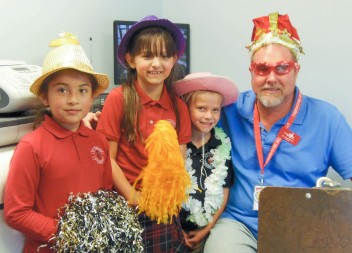 The mission of St. Therese School, Fort Wayne, is “to learn and share the Gospel and serve all God’s children.” That perhaps has been no better lived than in the life of the school’s late principal, Chuck Grimm. After a four-year battle with cancer, and surrounded by his family, Grimm passed away Wednesday, Aug. 24, at the age of 54.

Born in Portland, Ind., Grimm graduated from Ball State in 1984. That fall, he taught as a first grade teacher at St. Joseph’s School, Decatur. In 1988, he transferred to St. Patrick School in Fort Wayne; and between 1988 and 1992 he taught a variety of grades including kindergarten, fourth grade and middle school, and he served as assistant principal. He received his masters degree from Indiana University in 1990. Grimm first joined the faculty of St. Therese in 1992 as assistant principal and third grade teacher, and was appointed principal in 1995. He served as teacher and development director for Benoit Academy from 2002 until 2006, when he was appointed principal of St. Aloysius. Grimm rejoined St. Therese in 2006 as principal, and has served there in that role ever since.

Jeanette Donovon is currently serving as acting principal of St. Therese Catholic School. She shared that “Chuck’s commitment to his students was evident throughout his work. Mr. Grimm loved to have fun with his students. At one point, he even had his hair shaved because they raised so much money. He was willing to do anything to motivate the kids: special ribbons, buttons, or whatever he could do. One time, he got a pie in the face.”

Donovon continued: “Mr. Grimm loved Christmas. Every year he would start playing Christmas music in his office in October. He would also put up a 5-foot aluminum Christmas tree in his office, every year. It took up a good part of the office, but every class would take a trip down to see the tree.”

Grimm’s commitment to children extended beyond his time as a teacher and principal. He spent several summers directing one of the six Foellinger Foundation Summer Clubhouses, which provide at-risk children with a safe place to spend their summers.

“He really enjoyed working with those kids,” Donovon shared. “Chuck was passionate about ensuring everyone had a safe place to go.” 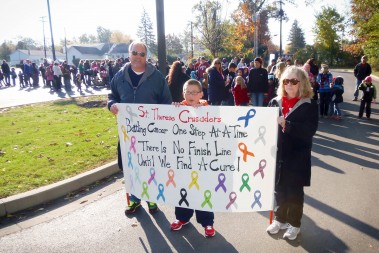 The year he was diagnosed, Grimm led St. Therese’s march to fight cancer of any kind. Michael Niemoeller, a first-grade student suffering from a brain tumor, helped him carry the sign.

Marsha Jones, superintendent of the Diocese of Fort Wayne-South Bend Catholic Schools, shared: “Over the last 16 years I have enjoyed the friendship of Chuck, but also benefitted from his insight on educational issues. He was always willing to serve as a mentor to new principals or fulfill a committee need, when asked. He will be greatly missed. Most of all, he was very committed to the success of St. Therese School and its students, whom he cared for deeply.”

“In my very last visit with Chuck at hospice, he became very emotional as he spoke about how much he loved and cared for the children of St. Therese,” she continued. “He described how the children were his life and brought him so much joy, never more so than when a he saw a child who had been struggling with a concept finally succeed. They continued to bring him the energy he needed as he battled his illness, and I am confident that he will be watching over all of them as he experiences the joy of eternal life with Jesus.”