For 364 days of the year, our diocesan priests and seminarians stand together as brothers in Christ.

But for one night every year, they take the basketball court as opposing squads, each determined to exert their dominance and claim bragging rights over their consecrated cohorts.

The eighth installment of the Cupertino Classic is set for Tuesday, Dec. 27 at Saint Joseph High School in South Bend. The event is named after St. Joseph of Cupertino, a 17th century friar who was known to levitate during prayer. What began in 2014 as a friendly competition pitting priests against seminarians in a basketball game has grown into an annual tradition, one that is highly anticipated by diocesan clergy and laity alike. The priests lead the overall series 4-3, although the seminarians have triumphed in three of the last four meetings, including last year’s 55-34 victory. 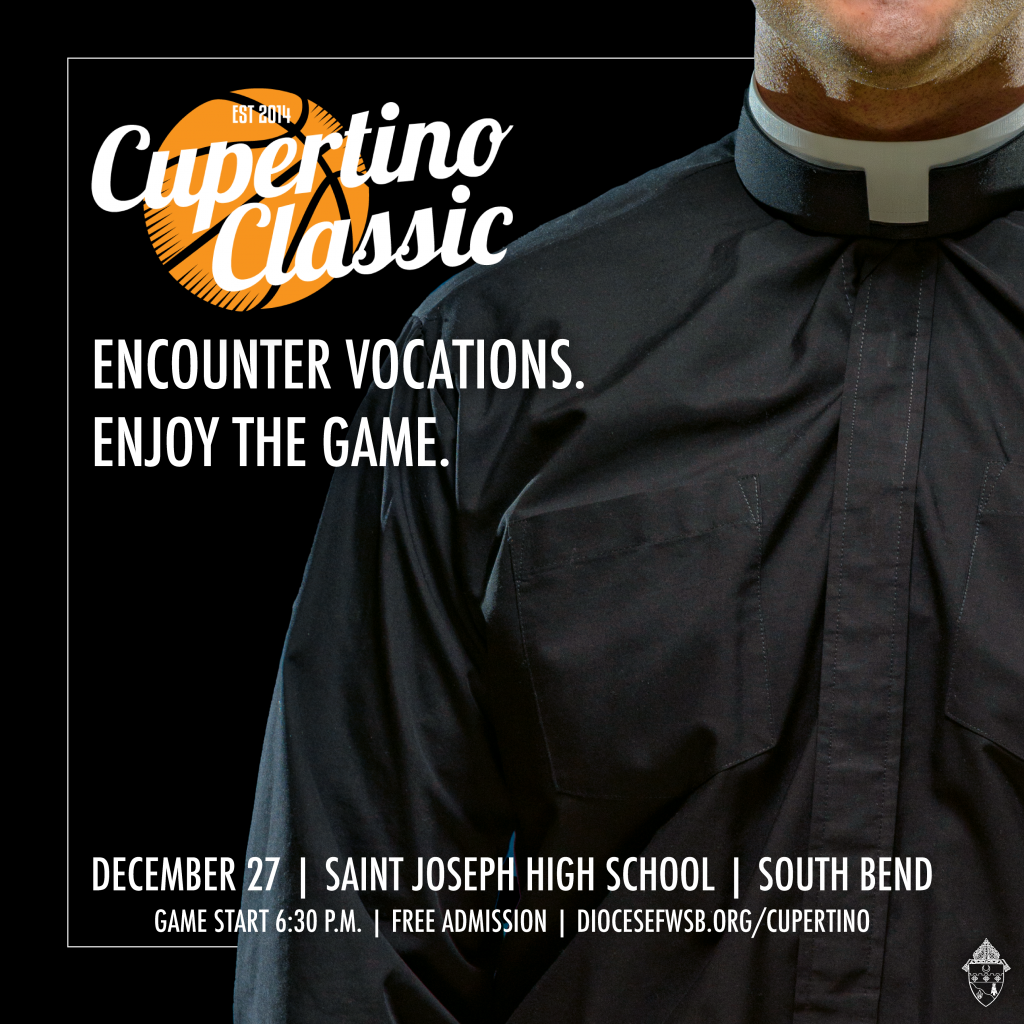 Father Daniel Niezer, Pastor at St. Dominic in Bremen, has been around since the game’s inception and has experienced it from both sides – three times as a seminarian, and three times as a priest.

“As a seminarian, I remember feeling that we were obviously the ‘heels’ of the game with the priests garnering all of the fan support. That gave us great motivation to stick it to the priests and pull off an upset. But now that I’ve been ordained a priest, it’s a great feeling to be on the other end and wanting to beat up the young kiddo seminarians,” Father Niezer said with a laugh.

The evening festivities will begin with Mass at 3:45 p.m. in the school chapel, followed by adoration of the Blessed Sacrament leading up to gametime. Doors will open at 5:45 p.m. for the game, with tipoff set for 6:30 p.m. There is no cost to attend, though donations are encouraged and will go towards the seminarian education fund. Seminarian Andy Barnes, who is organizing the event along with fellow seminarians Sam Martinez and Noah Isch, said the evening is all about the men and women who have given their lives to the Lord.

“The main mission of the event is to bring awareness and promote vocations to religious life and the priesthood, in particular the diocesan priesthood,” said Barnes, citing that Vocations Director Father Andrew Budzinski and the Sisters of St. Francis of Perpetual Adoration will be present to speak with anyone interested about discernment to the religious life.

“Ideally, the people of God will be able to witness the joy of the presbyterate and future priests of our diocese. Secondarily, this game is a fantastic way to bring all sorts of people from all across the diocese together to celebrate in a family-friendly, fun, and joy-filled way. With Mass and adoration, we also hope that people will be able to experience the love of Christ in the gift of the Holy Eucharist.”

The priests bring a wealth of experience to the court, with veterans like Fathers Matthew and Terry Coonan, along with Father Drew Curry, who Father Niezer said “has the gift of the Spirit and will make just about any three-pointer, as long as it’s ten feet behind the arc.”

Father Ben Landrigan will provide the priests with “court control and stability,” and he’ll be joined on the team by Father Niezer, Father Thomas Zehr, Father Paolo Degasperi, and Father Jay Horning.

In order to beat the younger and more energetic seminarian squad, Father Niezer said the priests will need to control the ball, control the clock, and keep a slow tempo. He admitted that his team’s preparation will be minimal yet effective in its goal of humiliation.

“Our conditioning will include a lot of smack talk and little exercise,” explained Father Niezer. “We want to do our best to be in the worst shape possible so that the seminarians feel even worse when we beat them.”

On the seminarian side, Deacon Brian Florin, who is playing in his fifth Cupertino Classic, said they key to victory is being able to play passionately while remaining under control.

“Honestly, at the end of the day, it comes down to bringing the intensity and matching their intensity,” said Deacon Florin. “The priests have the crowd on their side. We’ve got to try and keep our composure, so we can weather a storm if Father Terry [Coonan] hits a halfcourt three or Father Drew Curry hits one with his eyes closed.”

The seminarians will be led by Greenan Sullivan, who will operate as a player-coach on the floor. Deacon Florin was quick to point out that “this is Greenan’s home court,” as Sullivan starred at Saint Joseph High School for three years before playing college basketball at Ave Maria University in Florida. Sullivan and Deacon Florin will be joined by deacons David Langford, Jake Schneider, and Ryan Timossi, as well as seminarians Andy Barnes and Eric Plude.

In addition to chalking up one final win as a seminarian – as “turning the jersey inside-out is going to be quite the experience” next year – Deacon Florin said he is focused on enjoying the unique nature of the event.

“I want to soak in the experience of being around 1,000 people from the diocese,” said Deacon Florin. “Whether they know basketball or not, they’re there to support their priests and seminarians. During the game last year, I took a moment to stop, look around, and take that in. I was overwhelmed thinking, ‘This is my home; these are my people.’ And as I am soon to be ordained, these people are going to be my flock.”

And as Father Niezer noted, this flock relishes the chance to root on their favorite members of clergy in an environment entirely outside the normal church setting.

“Everybody enjoys the opportunity to see their priests and religious sisters in a different light,” said Father Niezer. “One day, we are seeing our priests playing a great game of basketball, and the next, we get to see them celebrating holy Mass. We get to see our Sisters of St. Francis making jokes on the P.A. during the game, and the next, they are spending extra time in front of the Blessed Sacrament. Who wouldn’t be attracted to these vocations?”