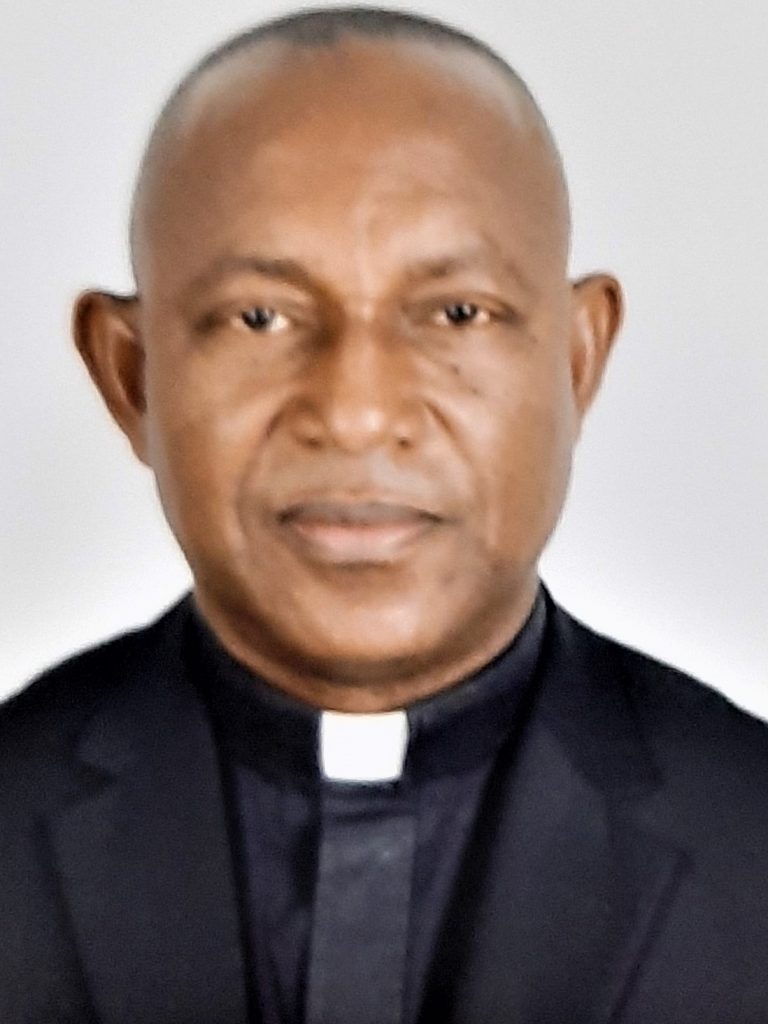 As a boy, Father Jonathan C. Agbedo knew he wanted to be a priest. He didn’t think he would get to pursue that dream, however, until a path opened in an unexpected place — the military.

On July 20, Father Agbedo will mark 25 years as a priest. Most of his service has been in his homeland of Nigeria or in Africa, but he has spent the past year in his first civilian parish assignment as parochial vicar at St. Jude Parish in Fort Wayne.

“I enjoy the love of the pastor and the staff here,” he said of St. Jude. “We all work like a family.” Father Agbedo, who will turn age 58 on June 28, is filling in at St. Jude for Father Robert D’Souza, who went home for a visit in India before the coronavirus pandemic began and hasn’t been able to return.

Along with normal parish pastoral responsibilities, Father Agbedo celebrates Mass at nursing homes, brings communion to homebound parishioners and anoints the sick and dying at hospitals.

“Father Jonathan has been a faithful and helpful priest this past year at St. Jude,” said Msgr. Robert Schulte, the pastor. “He answered many requests for the sacrament of the anointing of the sick at Parkview (Hospital) Randallia and has heard many confessions.

“Many have benefited from his stories of Nigeria and the Catholic faith in that part of our world,” Msgr. Schulte added. “His friendly demeanor has been a welcoming presence.”

Born in Edo State in southern Nigeria, Father Agbedo grew up in a Catholic family. He felt called to the priesthood while in grade school.

“Each time we would go to church,” he said of his family, “I would focus on what was happening on the altar.” At night, he would dream about it. However, as the oldest son among eight children, his father didn’t want him to enroll at a seminary.

“He said, if he dies, I am to look after the family,” Father Agbedo recalled.

Frustrated, Father Agbedo joined the Nigerian military on July 10, 1985, after graduation from high school. After his initial training, he was assigned as a general duty soldier at the army’s chaplaincy headquarters.

There, he saw a priest who also held the military rank of captain. Father Agbedo asked the man if it was possible to become a priest through the military. The priest said yes, the military could send him to the seminary after he completed his initial army training.

Agbedo served for three years and then received an eight-year scholarship for seminary education while still being paid as a soldier. He was ordained July 20, 1996, at a military base in Lagos, Nigeria, becoming the second soldier in the Nigerian armed forces to become a Catholic priest.

The military flew his family, his home bishop from the Diocese of Nsukka and others in to attend the ceremony.

“The day of my ordination, he was the happiest person,” he said of his father.

Father Agbedo served as a military chaplain, ministering to the needs of soldiers and their families. That included celebrating Mass, administering the Sacraments, visiting soldiers in the hospital, counseling them and presiding at funeral Masses.

He often prayed with and for soldiers before they deployed to a crisis area or while they served there, he recalled. His ministry sometimes took him into those crisis areas, such as in Sierra Leone, Liberia and areas of Nigeria.

“It was a very busy time in the military,” he said. “You had to be on your feet.”

He also had to complete all of the physical and other training expected of regular soldiers. In addition, he served from 2015-19 as commandant of the Nigerian Army’s training school for Roman Catholic chaplains.

Father Agbedo also found time during his military service to earn a master’s degree in public administration from the University of Ife in Nigeria, a master’s degree in clinical pastoral counseling and spiritual care from Fordham University in New York and a certificate in alcohol and substance abuse counseling from Metropolitan College of New York.

He held the rank of colonel when he retired from the military in June 2019 after about 34 years of service. He then returned to the Nsukka diocese and provided a report on his ministry to his bishop, he said. He asked the bishop for five years for a sabbatical and time to pursue a doctorate involving research in mental-health counseling. His bishop approved the request.

Father Agbedo arrived in the Diocese of Fort Wayne-South Bend on May 5, 2020, and started his assignment at St. Jude Parish the following month. While assisting there, he is deciding where to pursue his doctoral research.

After completing his doctorate, he plans to return to his home diocese in Nigeria. He hopes to open a clinical center there, providing mental health counseling to priests and members of men’s and women’s religious orders.

While he still feels unworthy to be a priest, Father Agbedo said priesthood is a life of love and self-giving. He enjoys “being an instrument in the hand of God to serve His church.”

“Priests,” he added, “are able to touch lives by living for the good of other people, providing them with spiritual services which bring them joy, hope and inner healing.”