During the Lenten season of mortification, there are many holy examples in the rich Catholic history to look to for inspiration. Yet, in the Diocese of Fort Wayne-South Bend, one need look no further than one’s own backyard.

Nearly everyone within the diocesan borders would recognize the name “Potawatomi.” The children of South Bend would think of a trip to the zoo. Say “Pokagon” and one might think of a state park. Say “Menominee” and the residents of Plymouth might remember an obscure monument.

But speak “Petit” and one would be hard pressed to find anyone who remembers the name. On a short walk on the grounds of the University of Notre Dame, his name might appear. He is in fact buried in the old log chapel behind the Basilica of the Sacred Heart.

Born in Rennes, France, on April 8, 1811, Father Benjamin Petit arrived in Indiana at a precarious time for the Potawatomi tribes. Indian removal was in full swing and U.S. President Andrew Jackson’s successor, Martin Van Buren, was determined to see the policy through. Indiana had to be made clear for American expansion westward. Some of the last holdouts in Indiana were the Potawatomi, under Chiefs Menominee and Leopold Pokagon – and many of them Catholic by tradition. 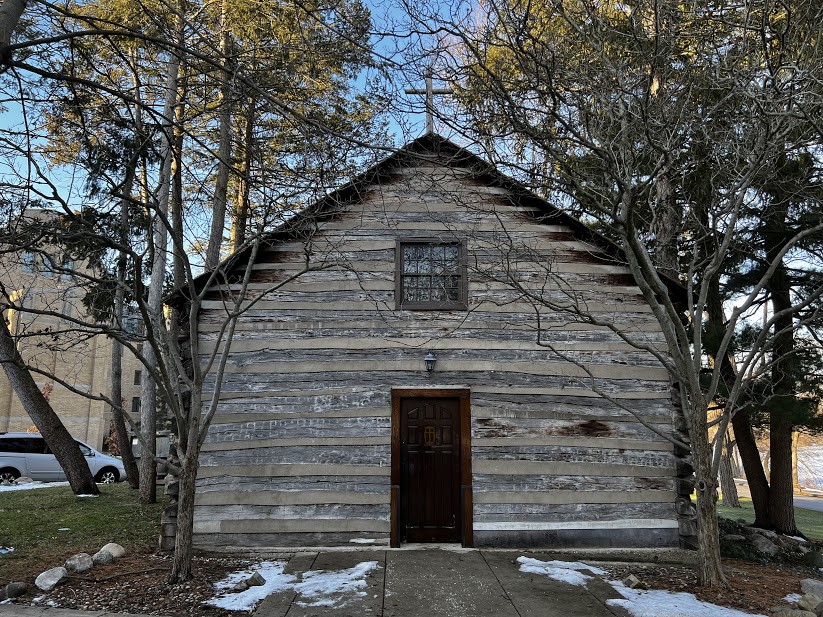 Photos by Stephen DiJulius
The small log cabin church on the campus of the University of Notre Dame in South Bend houses the grave of Father Benjamin Petit, one of the early priests of the Diocese of Vincennes to come and minister to the Potawatomi. He eventually joined them on the Trail of Death and perished at the age of 27 from a disease he contracted while traveling with them.

The first Europeans to establish friendly relations with the Potawatomi, or “People of the Small Prairie,” were Jesuit missionaries around 1640. For the next 120 years, the Jesuits baptized their children, offered Mass, anointed their sick, and bestowed extreme unction upon the dying.

Sixty years after the “Black Robes,” as the Jesuits were called, ceased missionary work and left the Potawatomi, a Baptist minister from Fort Wayne met with Chief Menominee and his people. The minister found their traditions – now two generations removed – to be strangely Catholic. Many were even hostile to his version of Christianity, which seemed at odds with the way they understood the means to salvation. Elders among them still told stories of the almost mythical “Black Robes.”

In 1830, one finally returned: Father Frederic Rezé, whom Pokagon specifically sought out for his own baptism. The brief return of a single Jesuit renewed the desire for the True Presence of Christ among the Potawatomi. They yearned for conversion, confession, and salvation. They rejected Protestantism and desired Catholicism. Pokagon himself felt so strongly for the need of priests to be among his people that he petitioned the diocese of Detroit to send them at once. The book “The Trail of Death: Letters of Benjamin Marie Petit” includes correspondence from Pokagon, including this petition, where he stated:

“An American ministère … wished to draw us to his religion; but neither I nor any of my village wished to send our children to his school, nor go to his meetings; we have preserved the way of prayer taught our ancestors by the black robe who used to be at St. Joseph.”

“ … at the first news of your arrival, which spread from village to village with the swiftness of the wind, everybody — men, women, and children — donned his best spring attire, mounted on horseback, and, through quagmire and marshes, came to see the chief of the Black-robes, of whom their fathers had spoken so much, whose departure several had regretted until their last breath and died bidding their children to listen to them, if the great Lord of Life sent them again.”

Unfortunately, by the fall of 1837, Father Deseille was dead and Bishop Bruté needed a priest to take his place. He looked toward his young deacon, Benjamin Petit, who had given up his career as a lawyer to become a missionary-priest in America. He was ordained in short order on October 14, 1837.

Of the sudden assignment, Father Petit wrote: “A priest yesterday, I said my first Mass today, and in two days I shall go to South Bend to console a tribe of Indians who have addressed a touching petition to Monseigneur for a new priest … I am not at all frightened, for I have faith in the One whose minister I am; but pray for me — I shall be seventy-five miles from the nearest priest, left to myself, but supported by the strong arm of my God.”

The arrival of Father Petit brought Christ back to the tribe after such long years in darkness. Day and night he labored for them. He ministered to them. He taught them the catechism; he heard their confessions. He blessed the graves of their dead.

“‘We were orphans,’ they said to me, ‘and as if in darkness, but you appeared among us like a great light, and we live.’”

And he loved them as his children, recounting: “Their zeal is surprising: at this moment I have Christians of three weeks’ standing who have learned prayers, catechism, and hymns in a space of time inconceivably short.”

Yet he was aware of the doom that lay ahead – this land was not theirs for much longer. He bore this knowledge in his heart and lay the burden at the feet of the Blessed Mother. At the end of every night, with the Potawatomi gathered around him in his humble cabin-chapel, he spoke: “In thy protection do we trust, O Virgin, meek and mild.”

Finally, that terrible day came when the point of bayonets forced his children from their beloved home. Father Petit wrote: “One morning … I said Mass. Then my dear church was stripped of all its ornaments, and at the moment of my departure I called all my children together. I spoke to them one more time; I wept; my listeners sobbed. It was heart-rending. We, the dying mission, prayed for the success of other missions, and we sang with one accord: In thy protection do we trust, O Virgin, meek and mild.”

Initially, Father Petit had not secured the required permission from his bishop to travel with the Potawatomi more than 600 miles across the Mississippi. So, the young father was forced to watch his children depart without him. But permission was eventually granted and Petit caught up with them on their first leg of what would come to be known as the Trail of Death.

In Logansport, where Petit caught up with them, the Potawatomi were overjoyed to see their priest again. He immediately began administering the sacraments of baptism and extreme unction to the group of destitute pilgrims. The American general in charge of the operation commented that this priest had more power than then he did.

Finally, on November 4, 1838, after 60 days and roughly 40 deaths, Father Petit completed his mission at St. Mary’s Mission, Kansas, by placing his children in the hands of a Jesuit, Father Christian Hoecken, stating:

“This young Christendom, in the midst of the anguish of exile and the ravages of epidemic, has received all the aid of religion. The sick have been anointed, the soil which covers the ashes of the dead is consecrated, faith and the practice of religious duties have been maintained, even in their temporal sorrows he whom these poor people call their father has had the consolation of often being able to render assistance. And now, left in the able hands of the Jesuit fathers, they need not regret the violent blow which has torn them from us — from the country, as they say, where their fathers rest.”

During the Trail of Death, Father Petit contracted a fever and became covered in sores over his whole body. He was brought to the Jesuits in St. Louis, Missouri, to rest. He died in their embrace on February 10, 1839, at the age of 27. 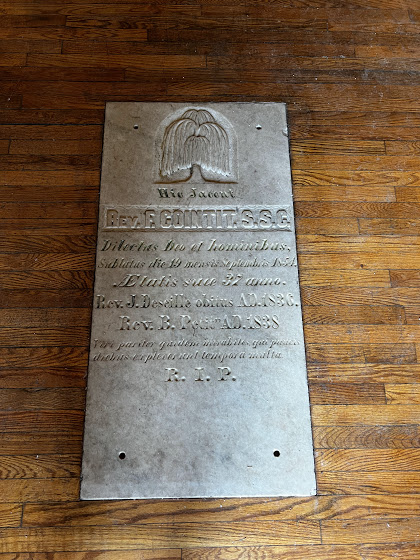 This Lent, looking out upon the St. Joseph River valley, driving by the grounds of Notre Dame, passing those so-easily-missed signs along the highways marking the Potawatomi Trail of Death, modern man can think of those people of the small prairie who never ceased keeping a vigil for the return of Christ.

During the dark days of fasting and mortification when churches are stripped of ornaments and Catholics seem as lost as orphans, it is important to keep a vigil for the coming of Easter morning. As it did for the Potawatomi, news will spread from village to village, and like the swiftness of the wind, everyone – men, women, and children – will don their best attire to see the Chief of the Black Robes, whose departure has been bemoaned, of whom parents speak to their children. He will enter homes once more and find His children still faithful, practicing the faith taught by modern-day Black Robes.