As seven candidates and Bishop Kevin C. Rhoades processed into St. Vincent de Paul Church, Fort Wayne, toward their ordination Saturday, June 6, their face masks weren’t the only reminder that this particular Mass of Ordination would stand out as different from others in the history of the Diocese of Fort Wayne-South Bend. But as Bishop Rhoades said, it was at the same time an ordination very much like any other: a Mass of joyful promise.

“In the midst of the crises in our nation and in the world, today’s liturgy fills us with hope,” he said in a welcoming statement. “God gives us hope. Today’s ordination reminds us never to allow ourselves to be turned away from the hope offered by the Gospel, the hope that these seven men bring us today. They will go forth today as ministers and witnesses of the joy and the hope of the Gospel, as servants and living images of the One who is ‘our hope of glory,’ Jesus Christ.” The bishop also welcomed to the Mass the family and friends of each of the candidates, repeating his words in Italian and the Nigerian language of Igbo for the benefit of those celebrating with candidates to the diaconate Paolo Degasperi and Augustine Onuoha. 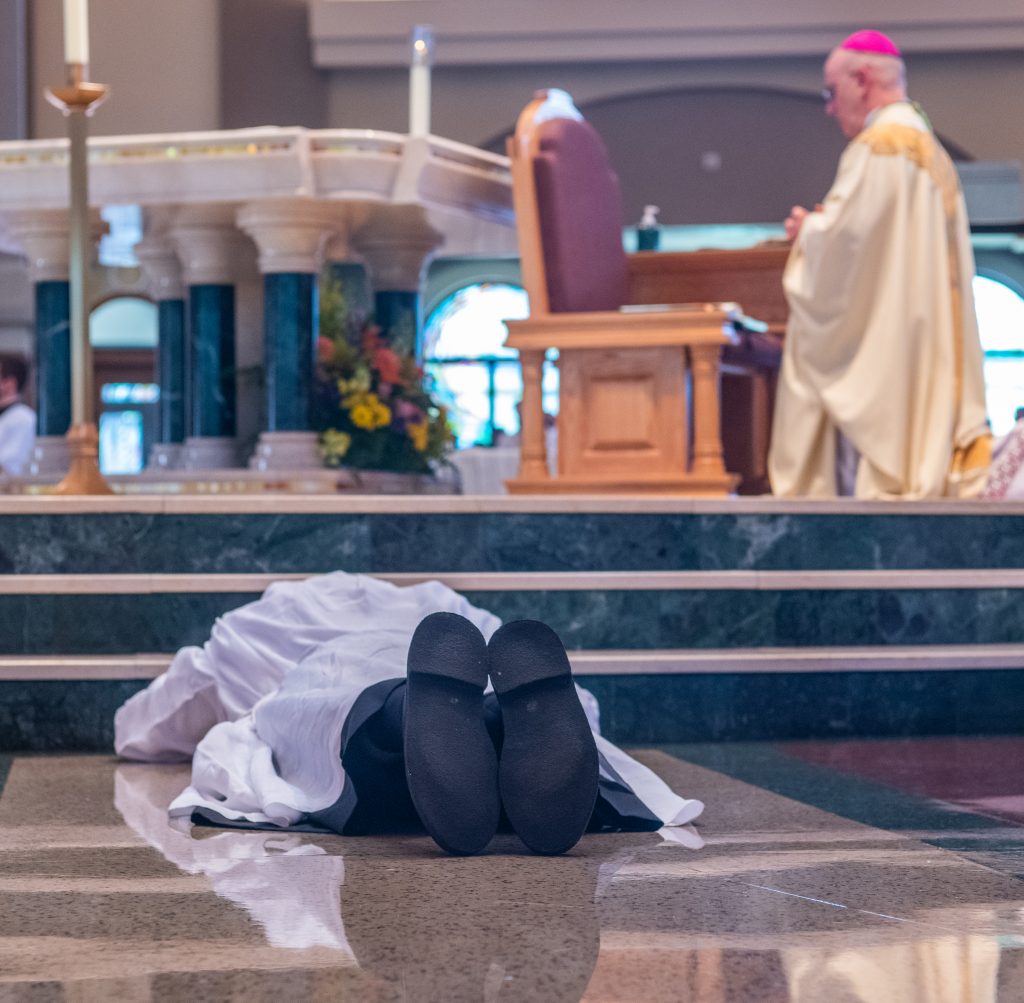 A candidate lies prostrate as Bishop Kevin C. Rhoades, concelebrants and the faithful pray the litany of supplication during a Mass June 6 at which six deacons and one priest and six deacons were ordained to serve in the Diocese of Fort Wayne-South Bend. The Mass was celebrated at St. Vincent de Paul Church, Fort Wayne.  — John Martin

For roughly the past decade, the diocese has celebrated a Mass of Ordination to the Diaconate in late May or early June, with a Mass of Ordination to the Sacred Priesthood taking place two weeks later. Complications stemming from the COVID-19 pandemic caused a postponement of the diaconate ordination and necessitated a combining of the two liturgies for the first time since 1984.

The location of the ordinations is most frequently the Cathedral of the Immaculate Conception, Fort Wayne, but was changed to St. Vincent de Paul in order to accommodate a larger number of worshippers given current social distancing recommendations. In addition to the family members and friends of Deacon Stephen Felicichia and seminarians Michael Ammer, Degasperi, Benjamin Landrigan, Keeton Lockwood, Onuoha and Logan Parrish who could be physically present, a few thousand of the faithful from five countries and 39 U.S. states joined with them in spirit and prayer by viewing a livestream video feed of the grace-filled event.

“I’ve been preparing for this for six years,” reflected Deacon Felicichia the afternoon before the liturgy. Years of military service, followed by more years of study, prayer and reflection, prepared the son of St. Therese Parish well.

“There’s a calm and a stillness, and deep joy that I feel right now,” he said. “At the same time, I’m exceptionally excited. Tomorrow at this time I’ll be celebrating my first Mass – something I’ve never said before. It’s such a gift.” A gift even a pandemic couldn’t take away.

“You adjust. Any challenges, you get through it. … God helps you bear the crosses, and this is a small one.”

During his homily, Bishop Rhoades gave thanks for the vocations of the seven, encouraging them to take inspiration from Moses, a man “chosen and sent by the Lord, courageous in leading His people toward the promised Land” (Pope John Paul II, “Pastores gregis”). “Is that not the mission of the ordained – to lead God’s people toward the true promised Land, which is heaven?” he asked.

The burden of leading the “difficult and unruly Israelites” distressed Moses, the bishop said. The Lord answered his prayer for assistance in leading them, bestowing some of the spirit He had given to Moses on 70 elders of the people.

“God has also heard my prayers and the prayers of so many people of our diocese for vocations to the priesthood,” he said.

He endeavored to embolden those presenting themselves for ordination in their first task of preaching and reminded them of the indelible spiritual character sacrament they were about to receive.

“The grace of the Holy Spirit will be configuring you in a new and radical way to Christ. You will be marked permanently with a vocation and mission. The Church calls it an indelible spiritual character. You are becoming instruments of Christ to serve His Body, the Church. By ordination, you will be able to act as Christ’s representatives and you will be strengthened by His grace throughout your lives to serve His people. Especially through your personal prayer, may you open your hearts each day to the grace of your ordination, the grace that God will so generously provide for the rest of your lives.”

He continued: “Men, as you are ordained today, think about what was the center of Jesus’ diakonia and His priesthood: it was the cross. In the Gospel, we heard the words of Jesus: ‘I am the good shepherd. A good shepherd lays down his life for the sheep.’ ‘The mystery of the cross is at the center of Jesus’ service as a shepherd: it is the great service that He renders to all of us’ (Pope Benedict XVI, 5-7-2006 homily).

“The sacrifice of the Good Shepherd remains continually present among us in the Holy Eucharist. That’s why the Eucharist is at the center of the life of the deacon and the priest. The Son of God humbled Himself and became a man for our sake. He allowed Himself to be humiliated to the point of death on the cross. He loved us to the end. He gave Himself to us and for us. And this is why you are being ordained: to be icons of the Good Shepherd who laid down His life for the sheep.”

“My sons, I entrust you to Jesus, the Good Shepherd,” he concluded. “May He lead you and carry you all the days of your life. May He help you to become, through Him and with Him, good shepherds of His flock! May the Blessed Virgin Mary, the Mother of the Good Shepherd, watch over you and intercede for you always!” 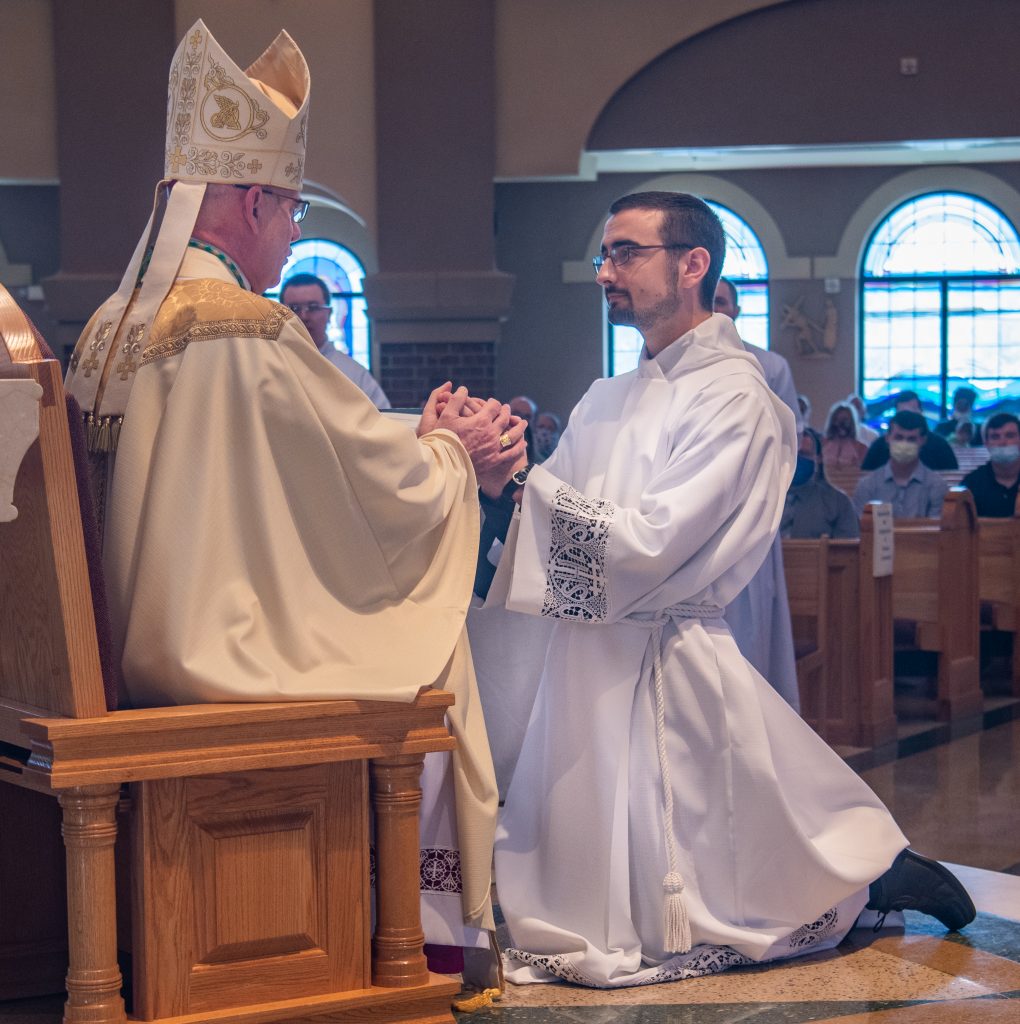 Logan Parris declares his intention to assume the responsibilities of the office of deacon and promise celibacy, as well as obedience to respect to Bishop Rhoades and his successors. — John Martin 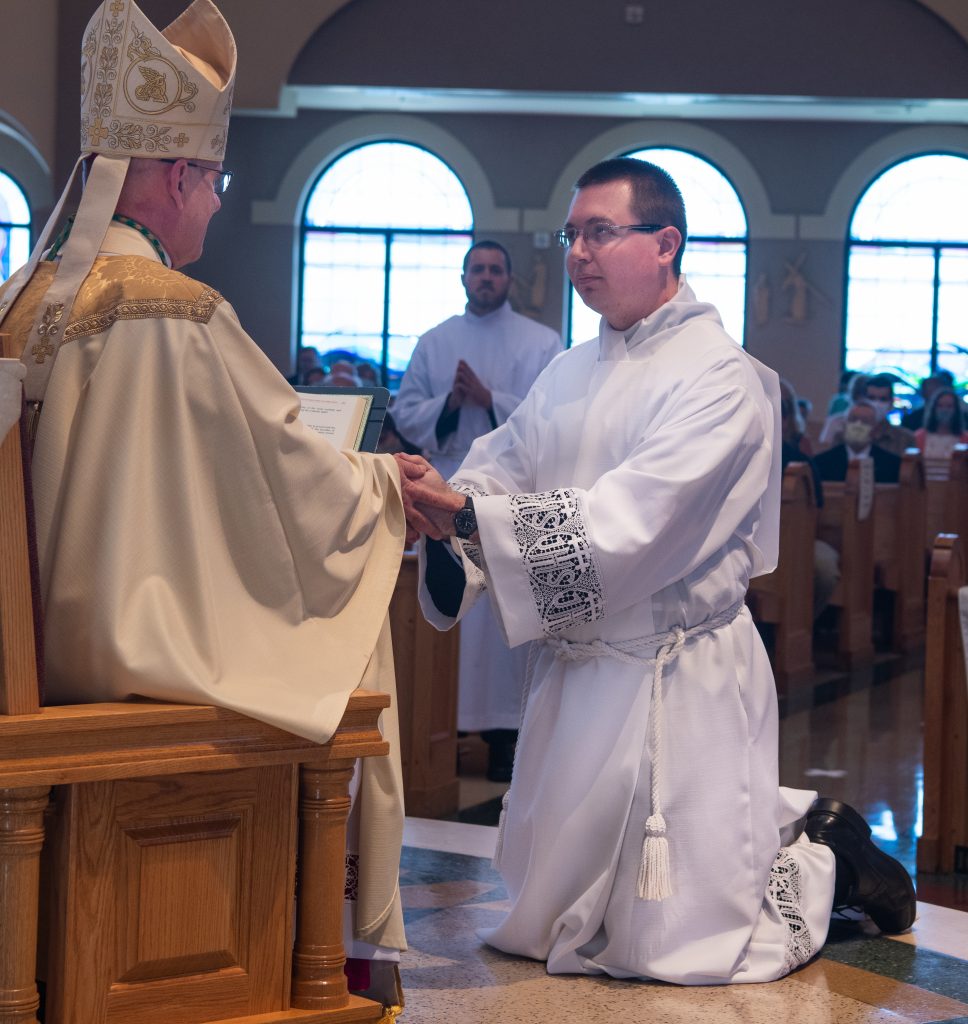 Keeton Lockwood declares his intention to assume the responsibilities of the office of deacon and promise celibacy, as well as obedience to respect to Bishop Rhoades and his successors. — John Martin 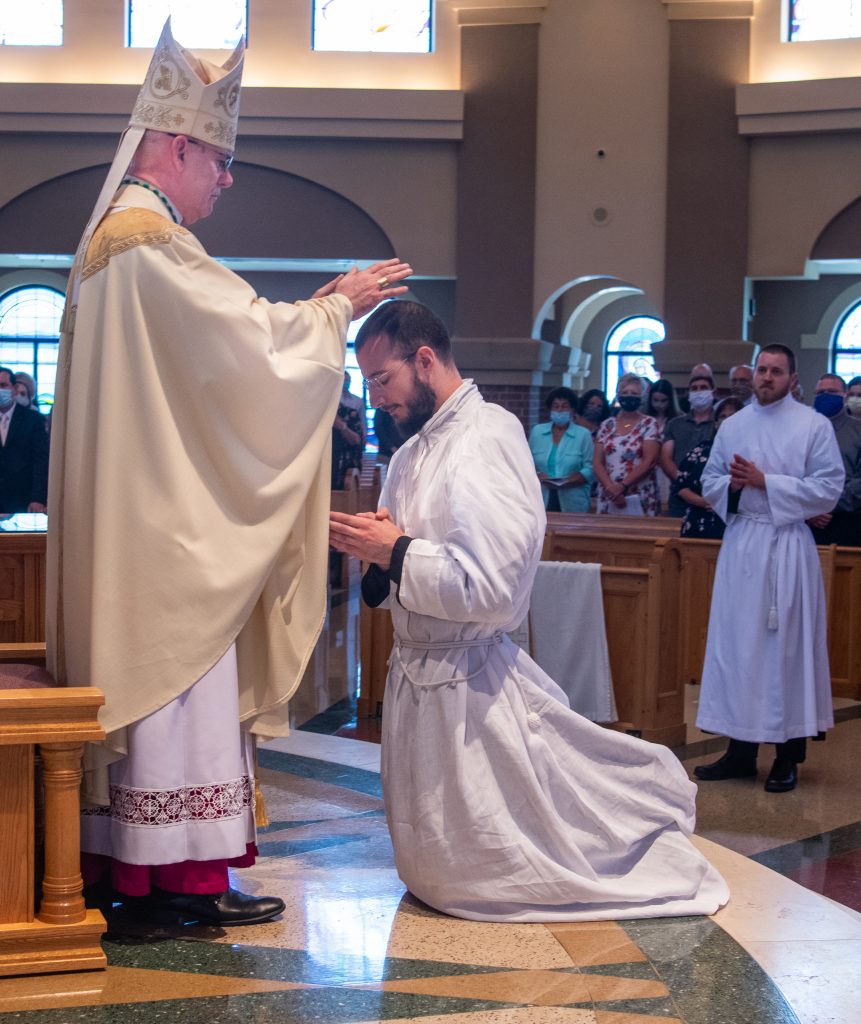 Paolo Degasperi makes the promise of the elect to Bishop Rhoades. — John Martin 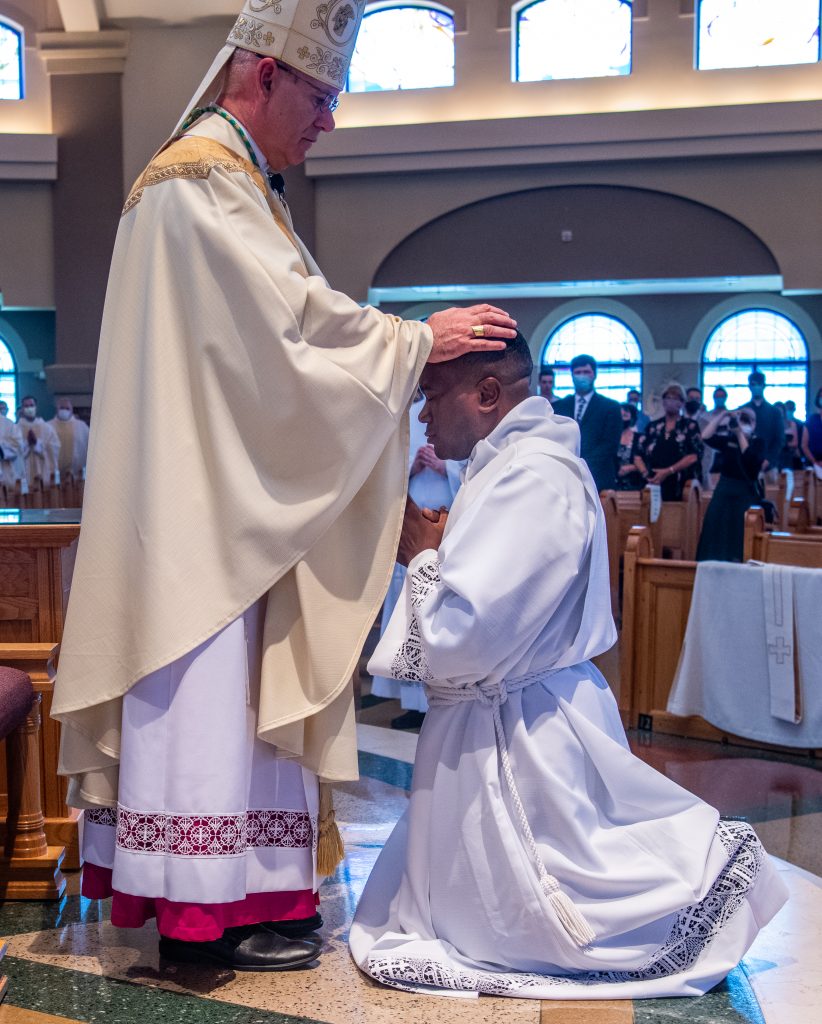 The bishop prays the prayer of ordination for Augustine Onuoha. — John Martin

In accordance with apostolic tradition and in silence, the bishop placed his hands on the heads of the candidates to the diaconate to invoke the Holy Spirit to come down upon them. Then, as they kneeled before him, he prayed the Prayer of Ordination, after which they were vested with the diaconal stole and dalmatic representing the liturgical ministry that they would fulfill. 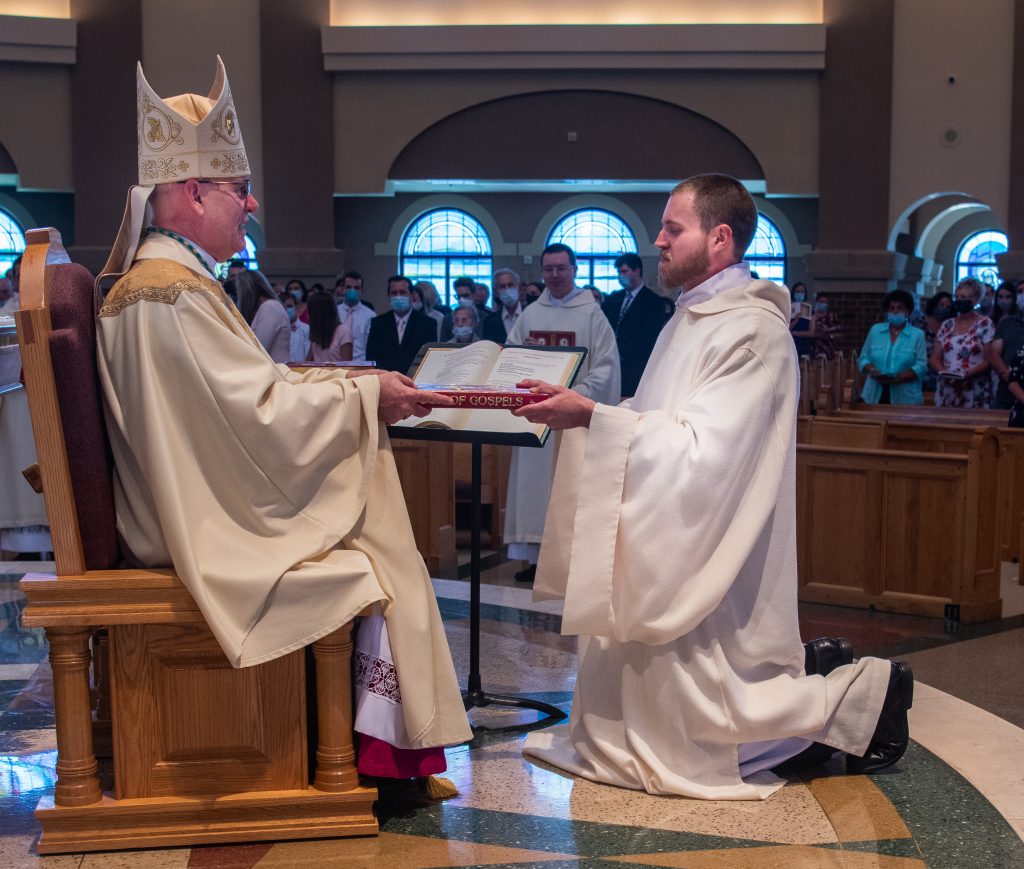 Newly ordained deacon Michael Ammer receive the Book of the Gospels, symbolizing the task of the deacon to proclaim the Gospel in liturgical celebrations and to preach the faith. — John Martin 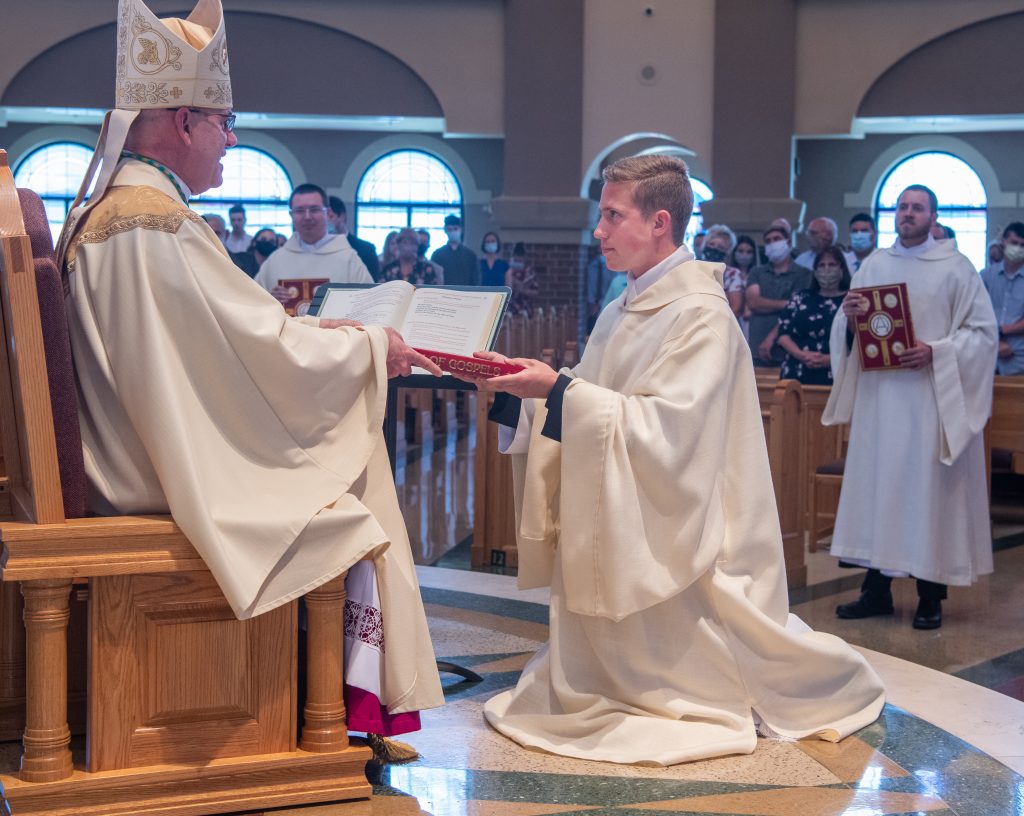 Newly ordained deacon Benjamin Landrigan receives the Book of the Gospels, symbolizing the task of the deacon to proclaim the Gospel in liturgical celebrations and to preach the faith. — John Martin

The new deacons received from him the Book of the Gospels, symbolizing the task of the deacon to proclaim the Gospel in liturgical celebrations and preach the Catholic faith in word and deed.

Next, Bishop Rhoades prayed the prayer of supplication for Deacon Felicichia. 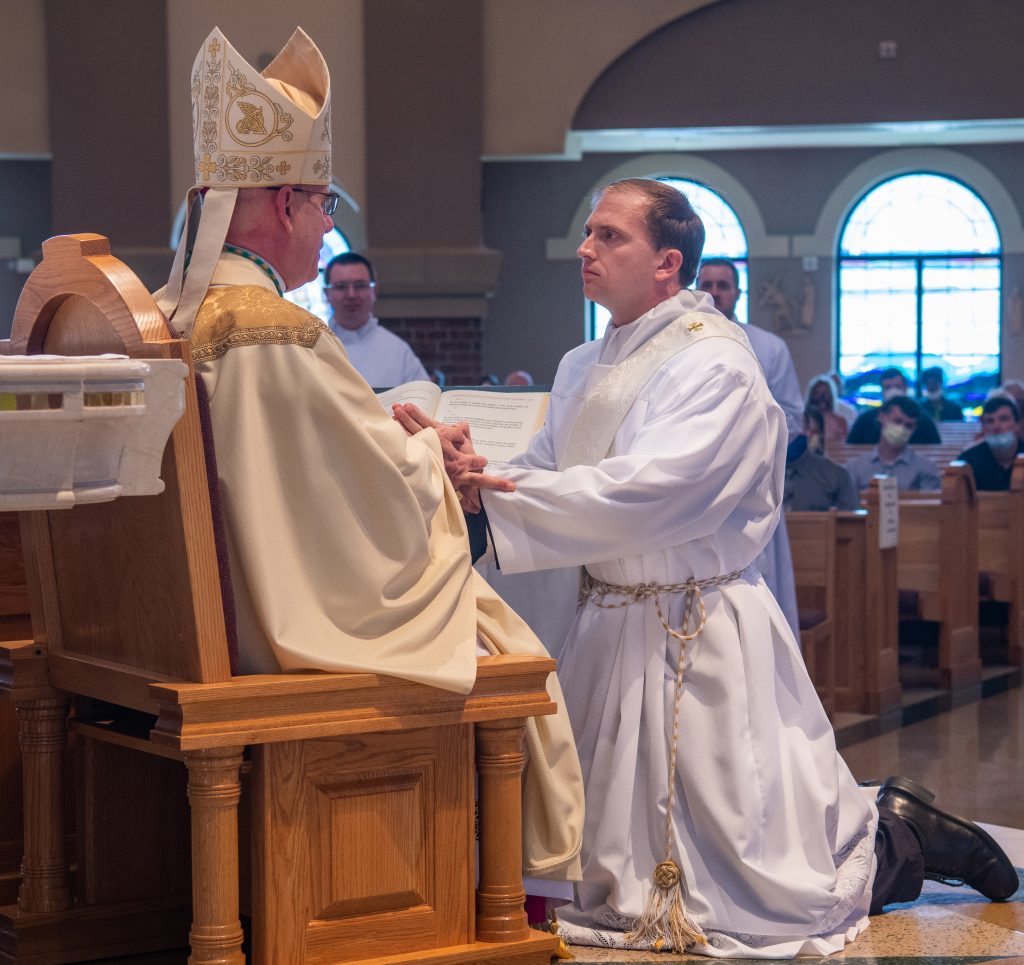 Deacon Felicichia makes the promise of the elect. — John Martin

“My dear people, let us pray that God the all-powerful Father will pour out abundantly the gifts of heaven on this, His servant, whom He has chosen for the office of priest,” he said to those present before laying his hands on the candidate’s head and praying the prayer of ordination. Father Felicichia was then vested by his uncle, Father Greg Holicky, with the vestments pertaining to his office, which are the stole — symbolizing the authority and responsibility to serve in imitation of Christ — and the chasuble, the principle garment and outermost vestment of the priest celebrating the Eucharist. His hands were anointed with Sacred Chrism, a symbol of wisdom and strength, and he received a chalice and paten to offer the oblation of the holy people to God. The bishop bestowed to the new priest and deacons a sign of peace in form of a fraternal kiss. 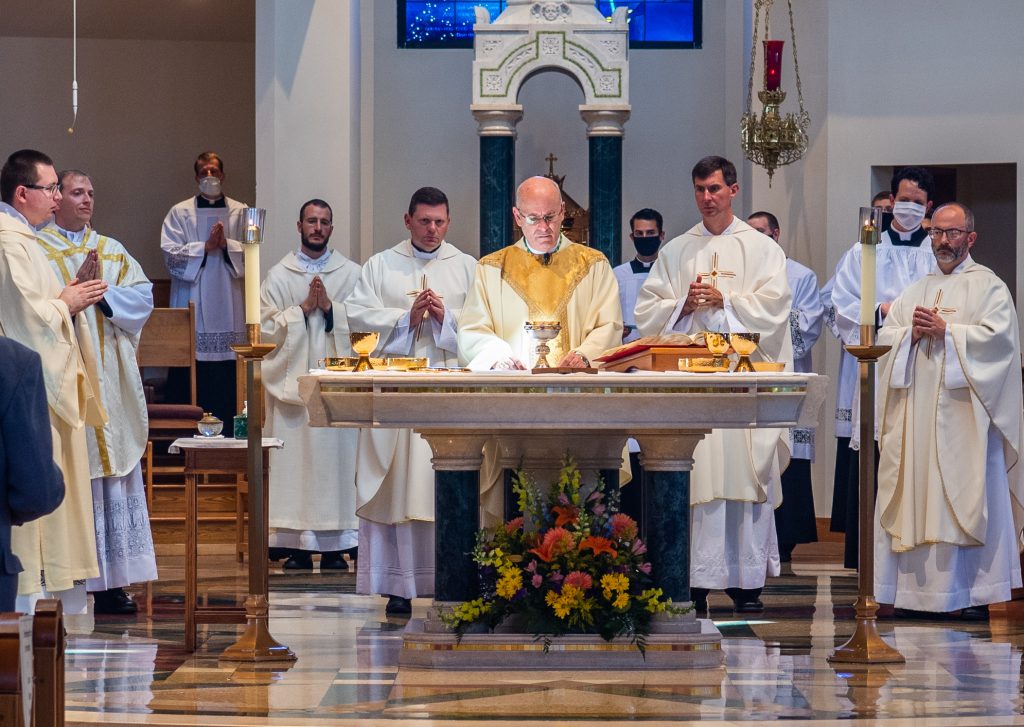