Luci Baines Johnson gets asked sometimes why she identifies so much with St. Elizabeth Ann Seton, but, she said, that’s the wrong question.

“The question for me is not why I identify with Elizabeth Ann Seton, but how on earth else could I not?” she said. “She resonates with me.”

During a distinguished life that has largely been in the public eye, Johnson has identified as many things. She’s the youngest daughter of President Lyndon Baines Johnson. She joined the Catholic Church as a teenager. She’s a wife and mother. She’s a successful businesswoman and philanthropist.

And now she’s leading a fundraising campaign for the National Shrine of St. Elizabeth Ann Seton in Emmitsburg, Maryland. 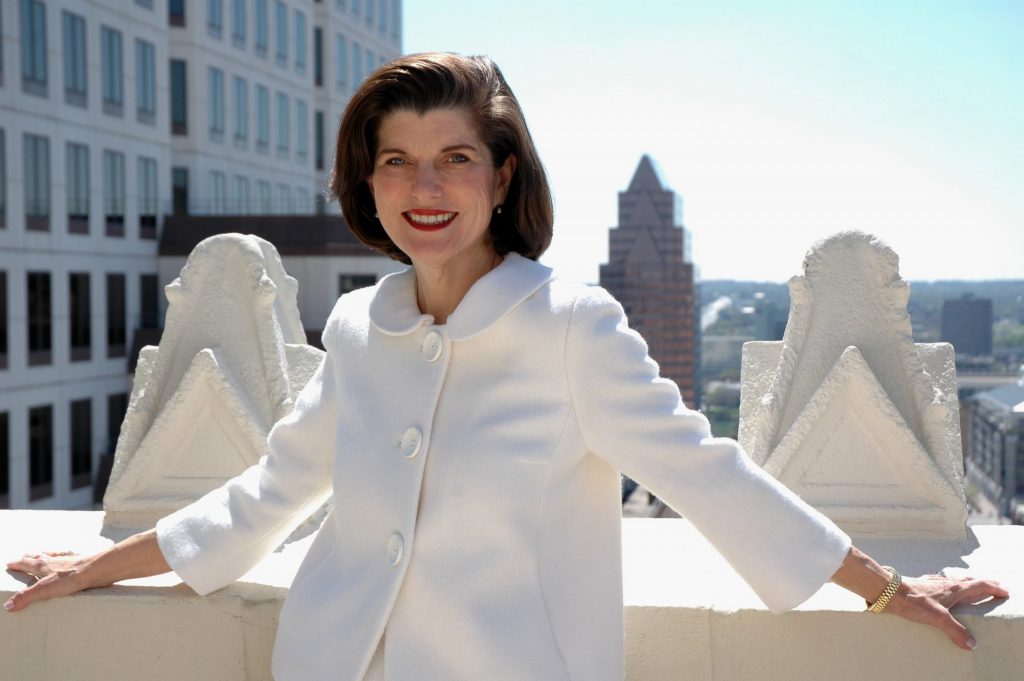 Luci Baines Johnson, seen in this undated photo, is leading a fundraising campaign for the National Shrine of St. Elizabeth Ann Seton in Emmitsburg, Md. The youngest daughter of President Lyndon Baines Johnson, she became a Catholic at age 18. As a wife, mother, businesswoman and philanthropist, Johnson feels her life’s journey has been marked with connections to the saint. (CNS photo/courtesy Devine Partners)

The shrine is in the midst of a yearlong commemoration of the 200th anniversary of the death of Mother Seton, the first native-born American saint. Among the activities will be “The Seton Family Treasures,” an exhibit of rarely seen Seton artifacts opening July 1.

The shrine also has launched “Seeker to Saint,” a series of monthly videos examining aspects of Seton’s life and spirituality. The first video is titled “I Am a Mother” and explores the love and devotion that this saint had for her five children.

As chairwoman of the shrine’s National Leaders Council, Johnson is helping to raise money that will fund a renovated and expanded museum, an expansion of the shrine’s Seeds of Hope program of retreats for the poor and other programs.

Johnson was asked to get involved after years of working with the Daughters of Charity, a religious order that traces its roots back to Mother Seton.

It was a natural fit. She has experienced triumph and tragedy, joy and heartbreak — similar in some degree to the saint’s real-life experiences.

Through it all, she said, she has relied on her deep faith and a devotion to Mother Seton.

“We all want somebody to identify with,” Johnson said. “We all want to have our religion have a more personal connection for us.”

Raised Episcopalian, Elizabeth Ann Seton became a Catholic in 1805 to the surprise and even ire of her extended family.

Johnson’s father was a member of the Disciples of Christ and her mother was an Episcopalian, the church that Luci Baines Johnson was ultimately raised in. “My father was the most ecumenical man I ever knew,” she said. “He would always say, ‘You understand, when you’re in my position, you need all the help you can get.’”

In Johnson’s teens, she began looking for something more from her faith, which led her to Catholicism. Her parents supported her search but only asked that she wait until adulthood to make the decision. She became a Catholic when she turned 18.

Mother Seton had five children before losing her husband to tuberculosis, leaving her to raise the children on her own.

Johnson had four children before a painful divorce and annulment ended her first marriage.

“Divorce and death are not the same — I would never claim they are,” she said. “But divorce is a death of something that you believed in and love and wanted to last forever and ever. And it didn’t.

“It grieved to me to the core of my existence. And so, I went to my faith, which, I think, lots of us do when times are frightening and worrisome and concerning.”

In 1984, five years after the end of her marriage, Johnson wed businessman Ian Turpin, and they remain happily married today. “If you ask me how long we’ve been married, I’ll always tell you the exact same thing I have said for the last 37 years: not long enough.” 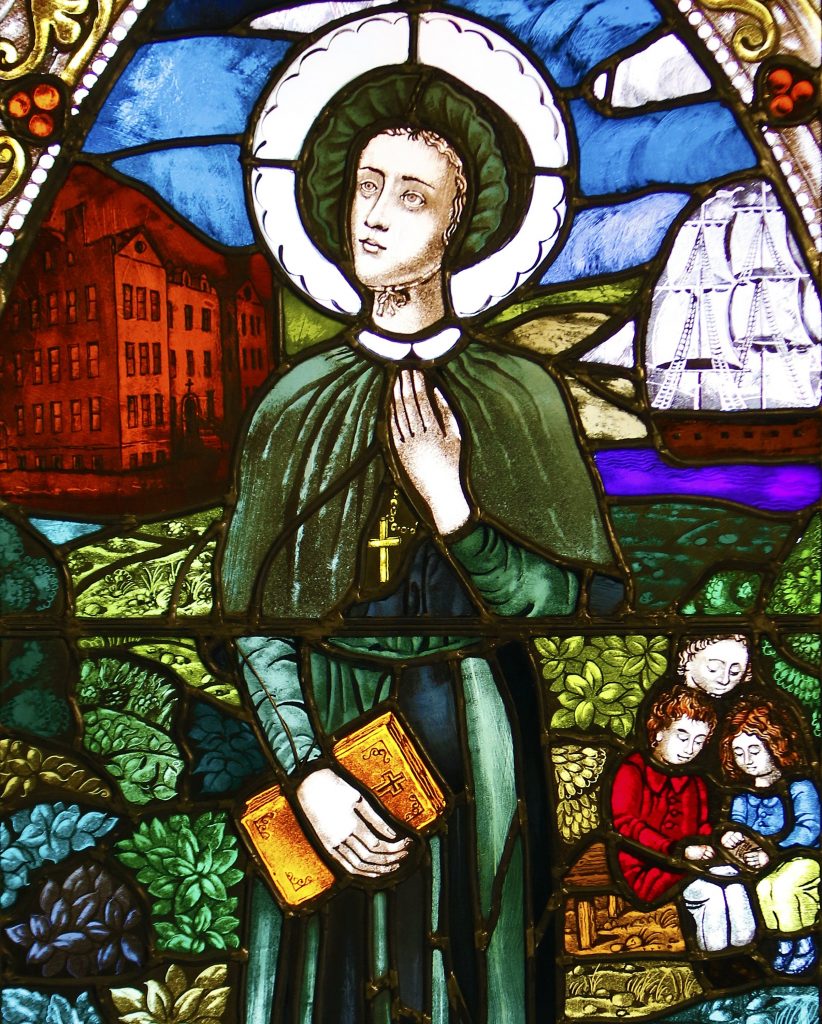 St. Elizabeth Ann Seton is depicted in a stained-glass window at the Basilica of St. Patrick’s Old Cathedral in New York City. The first native-born citizen of the U.S. to be canonized, she is recognized as the founder of the nation’s Catholic school system. (CNS photo/Gregory A. Shemitz)

The term entrepreneur wasn’t in use in the early 1800s, but Johnson likes to think of Mother Seton as one. As the foundress of a school and then an order of nuns — the Sisters of Charity of St. Joseph’s — in Emmitsburg, “she was essentially the founder of a start-up,” Johnson said.

Before that, she helped her husband, Will, with the family import business as it went through bankruptcy.

Since Johnson and Turpin were married, they have thrived on raising their family together, as well as the Johnson family’s business interests and active roles as philanthropists. Additionally, they founded a start-up of their own, BusinesSuites, a shared office business firm that became one of the largest in the country before it was sold.

In the late 1980s and early 1990s, she said, they experienced turbulence in their business and moved the family back to Texas from Canada where they had been living.

“The chance that maybe you will lose everything your family has built over many years was very frightening,” she said, just as it was for Mother Seton.

Johnson was first exposed to the shrine in Emmitsburg when as a teenager, she dated a young man at nearby Mount St. Mary’s University. She also remembers the excitement of Mother Seton being the first native-born American to be beatified in 1963 and then canonized in 1975.

“Getting your own American-born saint was a big deal,” she said. “It was an exciting thing, especially when you thought about all of the discrimination that had existed in the United States when John Fitzgerald Kennedy ran for the presidency.

Over the years, Johnson developed close relationships with the Sisters and Daughters of Charity, who trace their lineage back to Mother Seton and remain committed to serving those in need.

“Mother Seton tried very hard to help us,” Johnson said. “I think, really, what’s especially important is for us to look at how important she felt that people on the margins were and how we need to love them.”

The saint remains a unifying force in the Church, she said.

“I am a Roman Catholic convert, and I’m on the more liberal side of the political spectrum,” she said. “As an active person in public life, I have political differences with some of my fellow Americans.

“But I believe that respect and responsibility and caring about people living on the margins is something people from every political spectrum can embrace. I also believe it is in giving that we truly receive, and a purpose-driven life is life’s greatest joy.”

“I’m just looking to do my part to help,” she added, “and Mother Seton is a great help.”